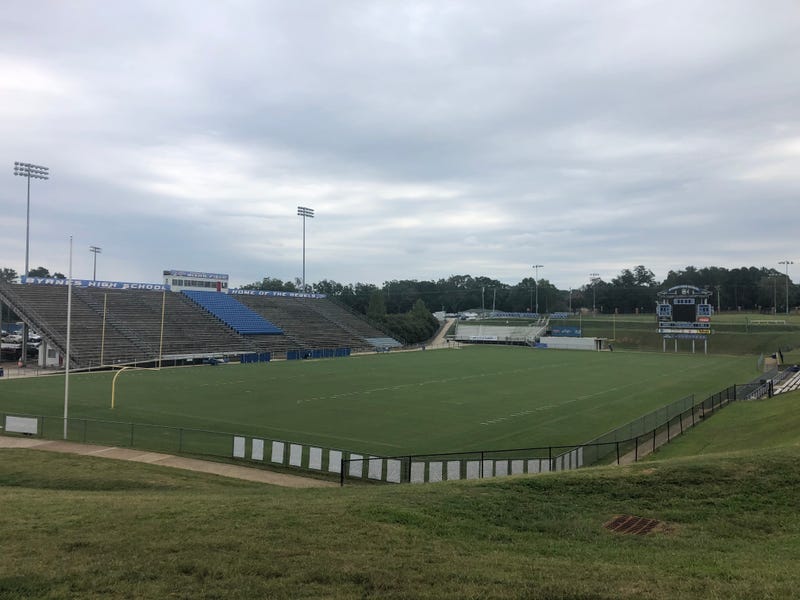 High School Football is in full swing and Week 4 is upon us! Here are this week's games and my picks.

Spartanburg at Byrnes: What a way to kick off the region slate with two good teams battling it out on Friday at Nixon Field. Much familiarity between the two schools with Chris Miller coming to play his former team, the Byrnes Rebels. Chris Miller was able to lead Byrnes back to a state title and do the same when he took over at Spartanburg. Byrnes is 3-0 on the season with wins over Greer, Northwestern, & Hough. Spartanburg is 1-2 on the season with their lone win coming over Greer. The Rebels are going to be without several key players on this offense. Kris Byrd, who was injured in the Northwestern game, is still day-to-day according to Reggie Shaw (ankle) while leading receiver Braylin Johnson is questionable this week with a concussion. Lawerence Scott (QB) will still have weapons in Harris, Jenkins, Talley, Burris, & co. The brightest star on this team so far has been the entire defensive unit. Through 12 quarters of play in 2019, the Byrnes defense has given up just 13 points. 7 of those points were credited to the "two's". Reggie Shaw bragged on his first team defense on Friday as he told us that the first team had only given up 6 points all season. I like this to be a competitive game, but Byrnes edges out Spartanburg in the 4th quarter. Cole's Pick: Byrnes 35, Spartanburg 21.

Dorman at Hillcrest: Dorman has rolled through their season to open up the 2019 season, but I think Hillcrest will be their first true test of the season. Last year, Dorman edged Hillcrest 28-21 in a very competitive game. I like Hillcrest to give Dorman another game this season, but I believe Dorman's speed will be too much for the Rams. Anthony Frate is in his 1st season at Hillcrest following in the footsteps of Greg Porter. The Rams have wins over Mauldin, Woodmont, & Laurens while Dorman has wins over Wade Hampton, York, & Northwestern. Dave Gutshall currently sits at 399 wins while Friday night could be his 400th victory as a Head Coach. Gutshall has recorded 247 wins during his stretch at Dorman from 1993-2019. Cole's Pick: Dorman 38, Hillcrest 28.

Gaffney at Mauldin: While the Mauldin Mavericks are coming off of a big win over Greer, the Indians of Gaffney are coming off of a loss to Mallard Creek. I like Gaffney to get back on track this week. Mauldin may present Gaffney some challenges at time, but I dont think that will last very long. Harry Cabiness has done a nice job at Mauldin getting this program back to their winning ways, but I think Gaffney's talent will out-match the Mavs. Lindsey & Co. for Gaffney will be too much for the Mauldin defense to handle. Cole's Pick: Gaffney 37, Mauldin 20.

Chesnee at Landrum: This is an interesting matchup for me to pick. Chesnee has not had the best start to their season while Landrum has struggled at times as well. Both teams do know what they can do to move the ball offensively. For Landrum, it is trusting Quarterback Cooper Gentry to provide an air attack that can help create tempo for this offense. For Chesnee, it is to be able to effectively run the football. I really think this is a close matchup for most of the game but I think Jason Farmer's squad will have a little bit more offense than the Eagles of Chesnee. Cole's Pick: Landrum 35, Chesnee 27.

Woodruff at Chapman: Will this game actually be competitive? I think that is the question that most are asking going into this game. In the past, there have been very competitive games when these two teams were led by Colton Bailey & Keegan Halloran. Can Bailey & the Woodruff offense keep this game close? I think they can for about a quarter. That is no disrepsect to Woodruff, it just shows how good this Chapman team is and how dangerous they have been in 2019. I like Chapman to put together a complete game and take care of business. Cole's Pick: Chapman 51, Woodruff 21.

Eastside at Broome: Marshall Skoloff leads this Eastside team (QB) with a 3-0 record recording wins against Southside, Riverside, & Wade Hampton. This offense has totaled 150 points through the first three games of the season. I believe Broome is the best competition Eastside has yet to face by far. Lynn Fleming will have his guys ready to go for this game. This is the hardest game for me to pick of the entire slate. I think Broome's size will give Eastside a little trouble throughout this game, but the experienced Quarterback in Skoloff for Eastside is what gives me concern for the Broome defense. I like Broome to win at home on Friday night. Cole's Pick: Broome 33, Eastside 31.

Woodmont at Greenwood: Greenwood is a down compared to Greenwood standards, and I think this is a complete game from Jet Turner's Wildcats. I like Woodmont to get a win over Greenwood, which is a big win for this program who simply put, are not used to beating teams like Greenwood. Jet Turner has put together a tremedous coaching staff with the addition two years ago of Joey Hawkins, former S&C Coach at Boiling Springs. I like Woodmont on Friday. Cole's Pick: Woodmont 35, Greenwood 24.

Listen to Byrnes Football this Friday night as they host Spartanburg on ESPN Upstate (97.1 SPTBG, 97.7 GVILLE) at 7:00pm. Be sure to tune into the Saturday Morning Scramble on Saturday for a full recap of these games with Cole Bryson & Jed Blackwell.