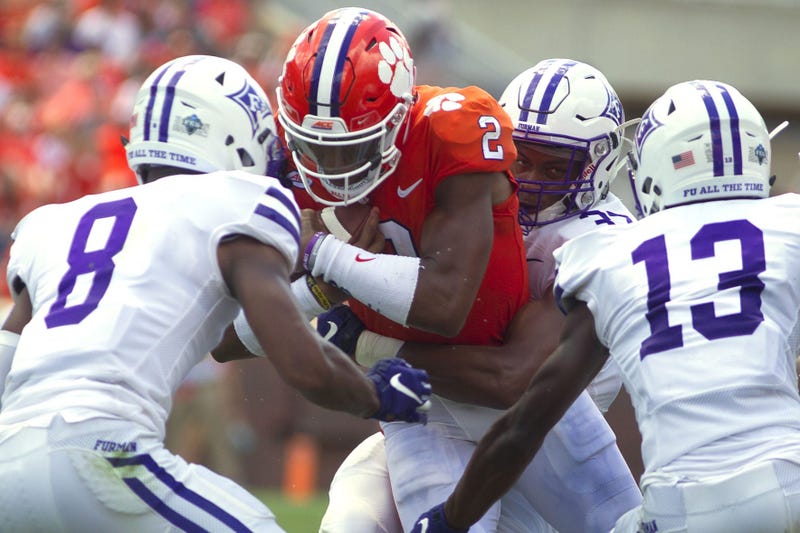 Dabo Swinney has stated publicly that he wants the Clemson Tigers to play a pre-season inter-squad scrimmage. He wants the Tigers to play someone other the Tigers. Wait, did he just low key introduce the way Clemson (and South Carolina) can circumvent the state law that mandates the two state Power 5 schools play an in-state FCS squad and get those teams off the Tigers’ and Gamecocks’ regular season schedule?

First, why do Clemson and South Carolina play FCS schools every year? Pretty simply, because the state has asked them to in order to help those schools’ budgets. So there’s a reason you see the Citadel, Furman, and Wofford on a rotating basis. The law is designed to prop up those schools’ budgets, pure and simple (and it's a good thing that the law exists). Regular season games are scarce, so what if South Carolina and Clemson could help SC-FCSers' bottom lines without eating 1/12th of the regular season schedule?

Spring games are useless. So are fan fests. Most coaches will tell you they don’t learn much about their squads, and what can you learn when your team is beating up on itself, especially when these players have seen each other all camp and have learned each other’s tendencies? Enter the in-state inter-squad fan fest and scrimmage.

Why not convert those FCS regular season games into a combined all-day event complete with drills, live practice, media availability, autograph session and a live scrimmage? Sell tickets, sell concessions, jerseys, pom-poms and funnel cakes and split the money in a way that helps South Carolina’s FCS schools make budget and allows the Gamecocks and Tigers to schedule better games.

Obviously this raises some serious questions and concerns. Allow me the indulgence of Q&Aing myself:

Why would Clemson and South Carolina want this? South Carolina more than Clemson needs winnable games that also help their strength of schedule. Instead of beating Furman by forty why not schedule a good Group of Five like Troy, Marshall, Georgia Southern, or App State every year? The Gamecocks could also schedule winnable Power 5 games against Wake Forest, Florida State, Duke, or Louisville; and build regional rivalries while they're at it. Clemson has a clear path to the national title, so strength of schedule isn’t really a concern for the Tigers, but it’s an opportunity for flexibility on the schedule.

What about injuries? Injuries are a part of the game. Players get injured in camp all the time. Besides, the NFL does inter-squad scrimmages during camp and those guys are just fine. This is a non-issue.Why would FCS schools say yes and how would you incentivize them? The biggest down side to this idea is for South Carolina’s FCS schools. But even then, there’s only one problem with it. It no longer gives The Citadel an opportunity to beat South Carolina. Furman and Wofford wouldn’t have the chance to go toe to toe with Clemson and possibly win. Unfortunate, yes but let’s not forget, the only reason these schools play each other at all is because they have to. If Clemson and South Carolina could get away without ever playing them, they would. So they’d still have the opportunity to get onto the same field but save themselves the embarrassment and early-season black eye of the butt whipping that normally occurs.

Going back to 2013, Clemson’s average score vs FCS opponents has been 56 to 6 in seven match ups. Tell me, what is an average drubbing by more than 50 points doing for either team’s players, coaches, or fans? Not much.And finally, is this better or worse for college football fans in the state of South Carolina? I’ll argue it’s better. Imagine being a SC State fan traveling to Clemson or Columbia for a full day event witnessing practice, drills, getting autographs, and culminating your day with a scrimmage. You’d come off with a much more positive experience (and still an undefeated season) doing that than watching your team get pounded into the dirt 70-something to 6.

**EDIT: Per South Carolina athletic director Ray Tanner, South Carolina's annual FCS in-state football game scheduling is a matter of policy and is not required by any statute, mandate, or law. However, a bill was introdued several years ago requiring Clemson and South Carolina to play.