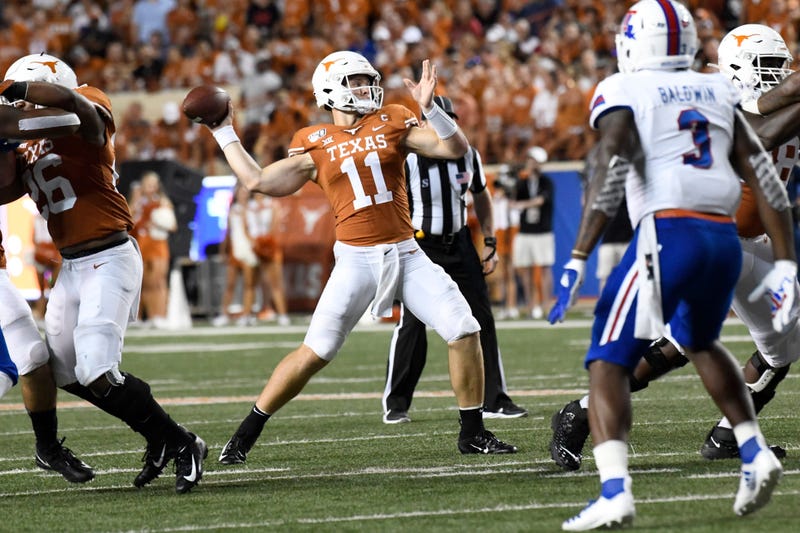 Oddsmakers are treating Clemson as though they’re an NFL team with this line. I’ve never seen anything like it, and it’s actually come down from where it opened at 19 points! Nineteen.

Maybe Vegas knows something I don’t, but I smell a dogfight in Death Valley. Jimbo Fisher will not be outcoached, and Kellen Mond will test Clemson’s secondary.

This will be a great test for Clemson, and if they are fighting complacency, this will be their wakeup call.

Any other week, this would be the national headliner. Texas wants everyone to know they’re back, and this is the definitive litmus test. Joe Burrow accounted for five touchdowns in the first half alone in LSU’s new look offense in a 55-3 rout over Georgia Southern. Meanwhile, Texas had no trouble with Louisiana Tech, dispatching the Bulldogs 45-14.

Sam Ehlinger is the real deal for Texas, and is the closest thing the sport has seen to Tim Tebow since Tim Tebow. I get the sense people are sleeping on the Longhorns as a national contender, and I can’t believe I’m actually picking against two SEC teams in marquee games.

The Longhorns, behind an improved defense, will score just enough at home to “upset” LSU.

No line on this key Pac-12 tilt, as USC sophomore starting quarterback JT Daniels was lost for the season for the Trojans in his team’s 31-23 victory over Fresno State in the opener. He’ll be replaced by true freshman and largely unknown Kedon Slovis.

I don’t typically like freshman qb’s in big games, and I especially steer clear against coaches as proven as Stanford’s David Shaw.

Stanford, off a 17-7 win over fellow blue bollar bunch Northwestern, will out execute USC, and come away with a hard fought victory.

This is Tennessee’s worst freaking nightmare. After serving as the punchline of opening week with a loss at home to 25 point underdog Georgia State, the Vols get, historically, one of the best coached teams in college football. A team you don’t want to play if your side isn’t organized yet.

The line here is fascinating and the game is even more so.

Can you imagine the heat on Jeremy Pruitt’s posterior if he loses this one? 0-2 to start the nonconference?

Tennessee has to be bounce back, right?

North Carolina freshman quarterback unexpectedly torched the Gamecocks last weekend, and the young Mack Brown led upstart looks to make it two upsets in a row when Miami comes to town. The Canes are generally regarded as the second best team in the All Cupcakes Conference, and are angry after falling to Florida 24-20, a contest many felt they should have won.

South Carolina fans will feel even worse about themselves this week. The Gamecocks are nowhere close to this defense’s equal.