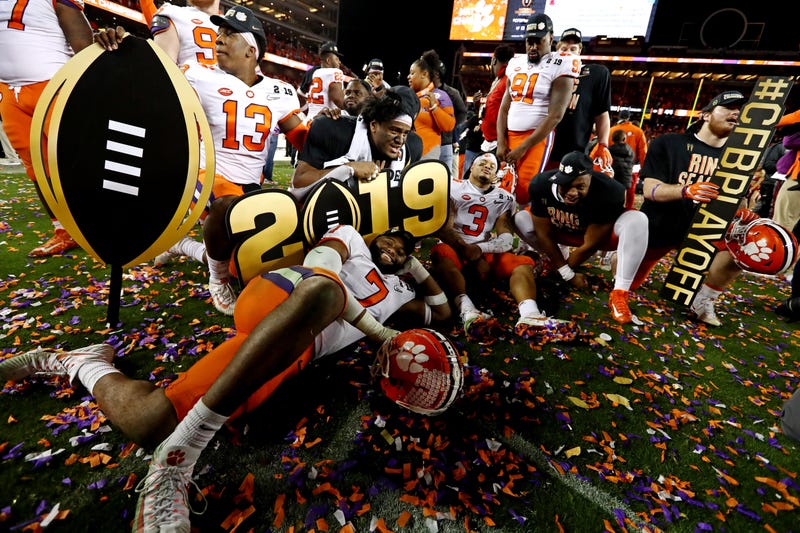 It’s an annual tradition for me. Once a year, every August, I rank my top 20 programs in college football as I see them presently. This is not a current top 25 poll, rather a widened lens view of programs as a whole. Criteria here include current program prestige, a product of brand recognition, current form, and how their history helped propel them to where they are today. Enjoy.

1.     Clemson – in a word, the “IT” program in college football today. Two national championships in three years. A rock star, celebrity head coach who hangs with Drake. The best freshman quarterback the sport has ever seen. The only program that can successfully recruit all 50 states. There are NFL teams with less talent. Need I say more?

2.     Alabama – For the first time in a long time, having to play runner up on my annual list. A national title in 2019 would place the Crimson Tide back on top. When you combine how well this program’s history (Bear Bryant), aligns with its present in Nick Saban, coupled with a beyond obsessed fan base, you have all the making of an eternal juggernaut. Alabama will always be great, in large part because the fans won’t settle for anything less.

4.     Notre Dame – the only program in the country with a major network, national television deal. For. Every. Game. If there is such a thing as an “America’s Team” in college football, it’s the Fighting Irish. And they’re back on the national scene, with multiple (albeit poor) national title and playoff appearances in the past six years.

5.     Oklahoma – We’ve often heard that a team needs to find its’ identity. No program is more in tune with this than the Sooners.

6.     Georgia – a program on the cusp of greatness, and one presently listed as the most viable threat to the Clemson and Alabama dynasties. They’ve won an SEC Championship and a College Football Playoff game, but failure to perform in key moments on the highest stages prevents the Bulldogs from entering the top five.

7.     LSU – We’ve gotten some answers as to where this program is headed under Ed Orgeron, and to my massive surprise, the early returns are positive. LSU’s monopoly on talent rich Louisiana buoys them, and at least until now, the Orgeron era is keeping up with this proud program’s storied past.

8.     Florida – Two consecutive failed coaching hires have removed Florida from the top five, but Dan Mullen eyes a return to the national stage. Last year’s top seven finish helps, as does a recruiting class presently ranked in the top ten for 2020. Still the most intimidating home field advantage in college football, as well as three national championships in the past 23 seasons.

9.     Michigan – The best fight song in college football history. The iconic helmets. The Big House. The history. And unfortunately, the misery in Harbaugh’s 0-4 mark against the school to the south.

10.     Texas – The highest earning college football program in the country. Unrivaled donations. Boosters that would make Bill Gates blush. The Longhorn Network, the only single team television network in the country. And have I mentioned Tom Herman? He has Austin dreaming big again.

11.     Stanford - A mystique no other program possesses. There’s something special about the Stanford Way. Palo Alto, their style of play, David Shaw, Jim Harbaugh preceding him, Andrew Luck, and old school football. What a prestigious brand.

12.     Auburn - The Kick Six play against Alabama alone in 2013 establishes the brand. Prior to that, Cam led this team to a national title. That combined with a rich football history in college football’s best conference means Auburn is no one’s little brother.

13.     Texas A&M - The Aggies have always had the 12th man, but the calls had grown faint under Kevin Sumlin’s mediocre tenure. For a program who’s rich football history helps them in these rankings, Jimbo Fisher represents a certain return to national relevance.

14.     Washington - Chris Petersen has the Huskies reliving their Steve Emtman glory days. He’s established the Huskies as the preeminent program in the Pac-12. The brand is revitalized.

15.     USC - Are what they once were? No. But the Trojans are still a prominent national brand, and the only collegiate product the Hollywood crowd will show for.

16.     Penn State - James Franklin has successfully put this institution’s checkered past in the rear view mirror, and he has the Nittany Lions on the cusp of bigger things.

17.     Florida State - Willie Taggart finds himself on thin ice already with a fan base hell bent on an immediate return to prominence.

18.     Miami - The “U” still has cache, but not what it once did. Playing in a city that’s been spoiled by its own history, fans only care about titles.

19.     Oregon - A few years ago, they were the “It” brand, donning blinding uniforms no one else possessed and a light-speed offense to match. But in a copy cat world, what once made Oregon unique has now been duplicated across the country. Nike founder Phil Knight and the Ducks must go back to the drawing for the next invention.

20.     Wisconsin - Paul Chryst and company are always seemingly in the picture, but seldom lead the way. “Jump Around”’after the 3rd quarter has become an iconic scene in college football, and Madison might be the best college town in the country.