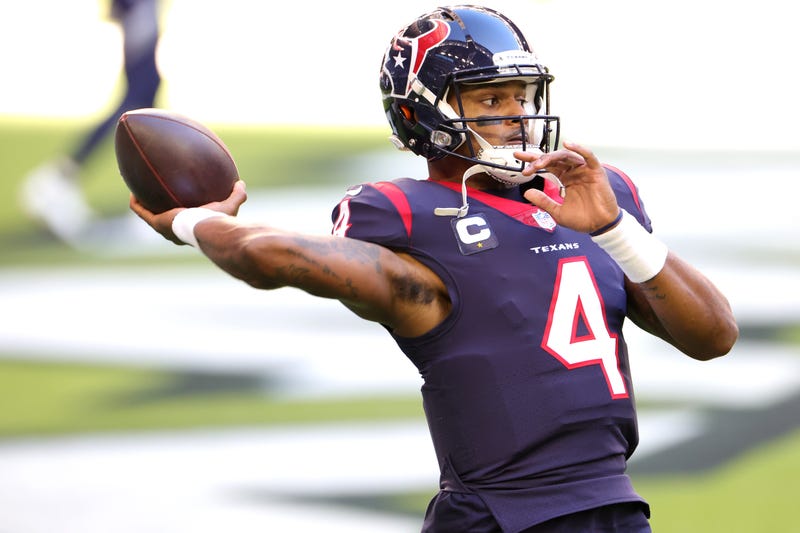 The Carolina Panthers need a quarterback. There's no secret. Teddy Bridgewater, a fantastic human being and a hell of a comeback story, is a hard guy to root against, and it can't be said that the problems the Panthers faced this year were in any way his fault. A new head coach, a GM that has since been let go, and an offense that was without its best player for over half the season made this a year that nearly any quarterback would struggle to succeed in.

But how you feel about Teddy, or the problems the program faced this year, are irrelevant to one fact: Deshaun Watson is a franchise quarterback. And at just 25 years old, its likely that his best years remain ahead of him.

It would be unfortunate for Teddy to lose his job under circumstances beyond his control, but this is the National Football League, and if a team can get a better player to fill your position, they're going to. It's a tough, but frequent, reality.

But can the Panthers pull it off, and end up with Deshaun Watson playing in the Carolinas this year?

The Texans don't want to let Deshaun go. They've made that abundantly clear. But, some relationships just get damaged beyond repair, and while I'm not ready to say that's the case between Watson and the Texans, I am comfortable saying it's trending that way. They told Deshaun he would have influence on the hiring of a new General Manager. Not only did they not, but they hired a guy that Dehsaun was, reportedly, entirely unpleased with.

They told him he would have influence on who was hired to come in as the new head coach. Watson gave them one name, Kansas City Offensive Coordainator Eric Bieniemy. So far, the Texans have declined to interview Bieniemy, and while that's not to say that they won't, he has been interviewed by other teams already, including the Atlanta Falcons.

It's not much of a thin branch to walk on to assume that the more the Texans don't include Watson in their decision making process, after telling him that they would, and directly lying to his face, the more Deshaun will be willing to waive his no-trade clause, and perhaps even force the Texans hand to ship him somewhere he'll feel more welcomed.

So, can the Panthers take advantage of that fact and convince Watson to come home to the Carolinas?

Maybe. But it will take a hell of an argument, a whole lot of investment.

What will the Panthers need to give up? Well, we know it'll be a lot. How much might be up to Deshaun, ultimately. It depends on how many teams he'd be willing to play for. Right now, the only team being reported as a preferred landing destination for the former Clemson Tiger is the Dolphins of Miami. One of the biggest reasons Deshaun wants out is his own personal feeling that the Texans were partially tone-deaf to the national climate regarding social change during the offseason. Miami is a team that not only appears to be trending in the right direction, but has also been at the forefront of that movement. They allowed their players to say and do what they felt during the summer, and are the only team in the National Football League to have both a minority General Manager and Head Coach. And it's rumored that's a major factor in Deshaun's interest.

If the number of teams Deshaun would waive his no-trade clause for is limited, then the bidding war for him might be suppresed, and if the Panthers can find their way into that group, it may help.

But if Deshaun feels he needs to get out of Houston at all costs and is willing to listen to offers from many more teams, that asking price goes significantly up - but would it get so high Carolina removed themselves from the war?

Carolina is working with the number eight pick in this year's NFL draft. For any shot at getting Watson out of Houston, you can plan on that pick going away - and perhaps next year's as well. You'd also need to plan on throwing in Teddy Bridgewater. While he would be a serviceable backup, he would be a perfect QB for the Texans - they don't need him to be a Pro Bowler, just good enough to get them through a temporary rebuilding process. Who better?

I would also expect the Texans to demand another player of starting calibre. I don't know that the Panthers would split from one of their WR corps, but it's likely the only player off the table would be Christian McCaffrey. Keeping that group together, though, would be a priority, as one of Carolina's strongest arguments would be that Deshaun would be working with a better skill group in Carolina than anywhere else.

So what's the biggest thing Carolina would need to do in order to lure Watson to Charlotte?

Convince him it's the best place to be.

Deshaun obviously holds social change dialogue as a major factor in this decision. The best thing the Panthers could do is point to their recent history. The removal of Jerry Richardson from the franchise and his statue from the stadium grounds, as well as the freedom of Panthers' players to speak out last summer are big selling points. We don't know if that will register alongside the proactive hirings of the Dolphins to Deshaun, but it at least shows it registers.

The Panthers can also argue, as we mentioned a moment ago, that in terms of skill position around Watson, very few other teams have the talent to place around Watson that they do. A solid young wide receiver corps, one of the best overall running backs in the league, and a developing tight end group could serve as magnets for a man who may feel he's wasted some of his prime years in Texas.

Carolina also has one thing going for them that no other team does: Watson can come home. The people of this area love him for his success during his time at Clemson. They would lose their minds for DW4 to be once again wearing that number in the Carolinas. He would threaten to lead the league in jersey sales by playing in front of a crowd that has deep love for him.

If you can sell Deshaun on those facts, and have him believe Carolina is closer than Dolphins to big time success, there's a chance. The Dolphins were a breath away from the playoffs last year, sure. But at a point where the best two QB's in the division, Brees and Brady, are both likely calling it a career after one or two more years, and with the Bills establishing dominance in the AFC East this year, Deshaun could position himself to be the best signal caller in a division that is going to be largely rebuilding next year.