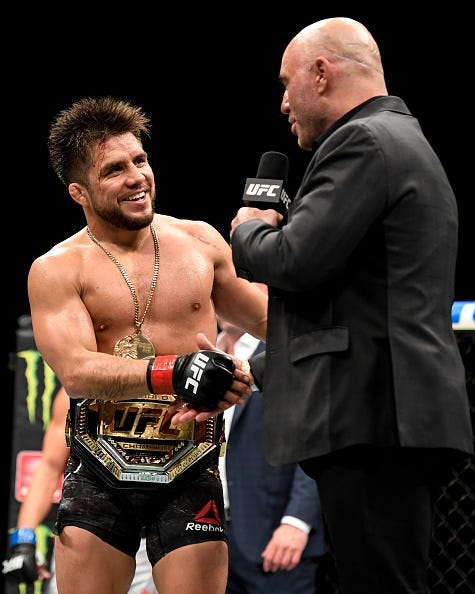 It's very rare that the general blue collar public finds themselves in the same position as the professional athletes that they watch, and the owners those athletes work for. But in the age of Coronavirus, we find ourselves all with one longing thought:

HOLY CRAP, SPORTS, PLEASE HURRY UP AND COME BACK BECAUSE I'M SO OVER IT.

Last Saturday night almost felt like a normal, football-off-season Saturday night. UFC 249 would mark the return of the first major sporting organization to our TV's, and would be the first to answer a series of questions that everyone had: how would they keep athletes and production crew safe? What protocols would have to be in place to stop the spread of COVID-19? How would sports without fans in attendance play on television?

It answered all of those, and with those answers, came one additional question:

Should we be in a hurry to get sports back? While it would be a welcome distraction from this new life, would it possibly end up doing more harm than good?

After the event, the answer felt clear: we all want sports back, and as quickly as possible. But, we shouldn't be in a hurry. Decisions are being made, about the overall events themselves and smaller situations contained within them, that we don't have enough data to answer yet.

In the days after UFC 249, the organization took major heat for what were perceived as failures to follow safety protocol. Dana White repeatedly entered the octagon and interacted with fighters, coaches, trainers, officials, and the ring announcer without a mask or gloves. Joe Rogan stood shoulder to shoulder with winners and losers instead of interviewing them from his announcer's table as was stated earlier.

And then, there was this moment.

Rogan attempted to shake the hand of Justin Gaethje after he defeated Tony Ferguson. Gaethje, his fists dripping in blood, offered a fistbump to Rogan, who rejected it, demanding a handshake, saying "I don't care."

In a regular day and age, that action would be frowned upon. In the age of Corona, it was a moment that made me cringe away from my television.

Asked for comment, Dana White responded in a way only Dana White can.

That is exactly the problem. There are so many of us that want sports to resume, but only under acceptable circumstances that at the best eliminate the spreading of the virus and at the least drastically mitigate the chances of it. UFC's tough approach led to one situation that placed many of its fighters and productions members directly exposed to the virus.

Ronaldo Souza, who told the UFC that he had contact with a COVID-19 positive member of his family just days before arriving in Jacksonville for a scheduled fight, was allowed not only to show up, but mingle with other people in the hotel. Souza would test positive for the virus, along with two members of his camp. It remains possible that other participants of the event may have contracted Coronavirus from the fighter who, once again, was not forced to follow any sort of protocol.

After his positive coronavirus test was revealed, video of Ronaldo Souza emerged that appears to contradict a UFC statement that Souza and his team followed social distancing guidelines. https://t.co/aErS4cWTT2

So, the UFC failed to maintain their own protocol during the event, and allowed a positive carrier of the virus to interact with an unknown number of other fighters and staff.

That is exactly why the rush to return to sports must be done so only with strict safety protocols, and required adherence to them.

NASCAR is next up in the spotlight, as they turn their machines loose on the asphalt of Darlington on Sunday. So far, NASCAR has seemed to be very serious about preventing the spread of the virus amongst crew members in the garages, creating a series of regulations they will follow to limit contact as much as possible. Teams will be limited to only sixteen people, and media will not be allowed (including the play by play crew on FOX who will be calling the race remote from a studio.) During the competition caution at lap 30, half the teams will be allowed to pit on one lap, the other half pitting the next time by.

If NASCAR is able to enforce their protocols, and to successfully pull off the race without the virus popping up on the radar, other sports will have a rough roadmap to follow for the same.

But why are fall sports - college football specifically - in such a hurry to move forward? I understand that football is the lifeblood of entire athletic departments and that without it touch decisions will have to be made. Many schools are already cutting track and field, swimming, and other sports, including Bowling Green, who eliminated their baseball program this week.

We know football needs to have players on the field by early July if a September start is possible. But, in the fervor to accomplish that feat, one point of discussion is being lost: we aren't sure that football will be safe in September. So, why the hurry to make that decision now? Why rush to make a decision about July, or August, or even September, in the middle of May?

At best, you're going to get people's hopes up and then let them down when you have to rescind that decision. At worst, you're going to fall into the gambler's fallacy, believe you've committed yourself too far to pull back, and put players on the field without the ability to guarantee their safety.

We all want sports back. But making calls about football now has no positive outcome at all. We don't have the data to make that decision successfully. And while we all want clarity, and we all want plans, at the end of the day - a plan created without enough information is a plan that is guaranteed to fail.