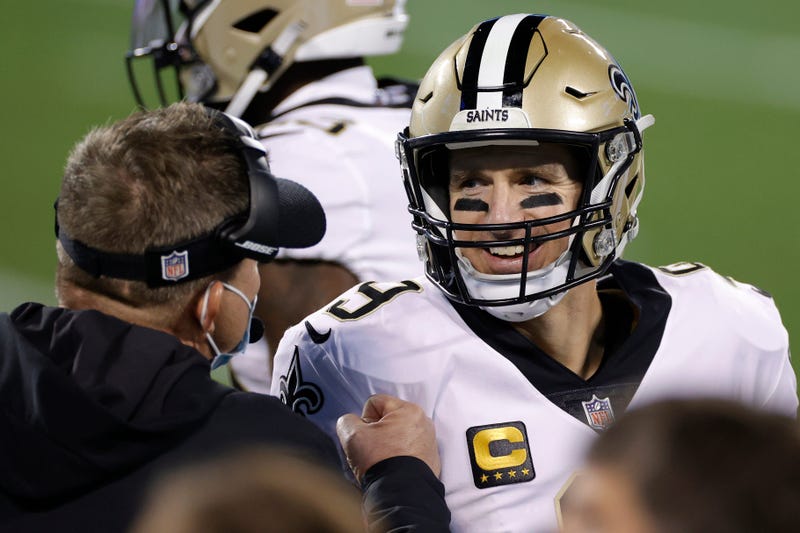 I know I'm in Panthers country. And I know that we've held a (dare I say?) friendly, respectful rivalry with Carolina since divisional realignment a number of years ago. And I know that at the end of the day, writing a blog about my team, and my quarterback, might not seem like the best idea, the most compelling idea in the world.

This is a letter about, and to, a man who saved a city, from a guy who will never stop appreciating that fact.

In 2005, a significantly younger Rob Brown was on a road trip with his family, traveling the United States in the back of an RV, wearing black and gold across the nation, getting ready for another season, a better season. The previous year, the New Orleans Saints had gone 8-8, and all signs pointed towards a trend upward for the team who's logo adorned the majority of clothing he had brought on that cross-country adventure.

While sitting in that RV in late August, my family huddled around a television set, as death and destruction swept across the boot of Louisiana. Hurricane Katrina, which would go down as one of the costliest storms in regard to both damange and lives lost to strike the United States, changed the history of the city of New Orleans, Louisiana, and the rest of the Gulf Coast.

That season was supposed to be different. Aaron Brooks had seemed to grow up a bit. The Saints finally added to their offensive line with Jamaal Brown, a highly coveted tackle of out Oklahoma. Jim Haslett had shown signs of improvement as a play caller in that .500 campaign the year before.

And it was different, but not in the way we expected it to be.

The Saints were evacuated from New Orleans, and no one knew what was going to happen with football. And in all honesty, for a few months, it didn't look like we'd have football. And why would we? Almost 2,000 people were dead. Gulf Coast residents were shipped around the rest of the country and had no homes to return to. The Superdome was in tatters. The roof was ripped open. Rain and wind had fallen onto the field. People had died inside.

So the Saints, now homeless with nowhere to play, represented their fanbase in a way that no team ever had before. Their home was ruined. Their future was in question.

They played their first "home" game against the Giants, in the Meadowlands. The rest of their "home" games, which were home in name only, were played in LSU's Tiger Stadium, a couple of hours outside of the city, and San Antonio Texas, in the Alamodome.

But those games mattered, even if the vast majority of them ended up in a loss. Because, while the Gulf Coast was spending six days a week picking up the remains of their homes and businesses, for a few hours on a Sunday, that didn't matter. The damn Saints were playing. They weren't playing well. And who could've expected them to? The region was their home, too. But they were playing and Saints fans caught in the eye of the storm had something to look forward to, had something to smile about, when everything else felt lost.

Pictures were printed every Monday of Gulf Coast residents watching the games inside of the bare frames of homes that were no longer whole. Crawfish boils were happening on gameday in front of piles of rubble that used to be businesses. Second lines and brass music filled the air that, the other six days of the week, rung deafeningly loud with the sound of silence and sorrow.

The Saints, which felt less like a football team and more like a family, were all they had. And for a few hours a week, all of the anger and rage and despair and sadness could be channeled into being a fan. It was, if nothing else, therapeutic. The Saints were there for us when it felt like everyone else had failed us.

But then the reports started coming in.

Tom Benson was interested in moving the team. The NFL, we all knew, had been looking to relocate a franchise for a while, and now had multiple cities ready to compete to get one. At a point in time where we were closer to the football team then ever before, the thought of abandonment by our one outlet was heartwrenching.

The 2006 offseason was filled with questions. Jim Haslett was relieved of his duties after that previous year's 3-13 campaign. A rookie Head Coach with no experience in that position by the name of Sean Payton had taken over the helm. The Saints had selected Reggie Bush, the human highlight reel out of USC, and no one knew if his talent would translate to the next level.

And a recently signed quarterback, coming off of an injury that was so questionable that the Miami Dolphins had refused to sign him to a contract, was now our signal-caller.

And of course, the threat of our team leaving was still there.

The 2006 season started with two games on the road while construction on the Superdome was finished up, before the Saints could be allowed to come back home to the Gulf Coast.

The Saints had lost three of their four preseason games and, of course, no one really had any expectations. Rookie head coach. QB with injury concerns. A fanbase who's loyalty had been tested the year before not just by mother nature but by the team's ownership group and the league itself.

They went to Cleveland.

They went to Lambeau Field.

And then, a night unlike any other in football history.

Back in the 'Dome.

The lights went out. Robin Roberts talked on the jumbotron about what had happened, and the resiliance of the people of the Gulf Coast.

U2 came out. Green Day came out. Trombone Shorty, a beloved musician from the Big Easy, joined them on stage.

"The Saints are coming."

The team came out, and had the Superdome not been refitted with a brand new, state of the art roof, I am convinced the people in that building would've sent it into orbit with the noise they made.

I was there, in that number. We cried. All of us. Seventy-seven thousand people who walked in as strangers began to weep as family. The cop I was next to cried. The doctor on the other side of me cried. I cried.

And the legacy of the new New Orleans Saints began.

Steve Gleason blocked a punt. Curtis Deloach recovered it in the end zone for a touchdown.

Drew Brees and the Saints never looked back. And the second-line to a new era had begun.

The Saints were ours again. The 'Dome was never less than capacity. Drew Brees, Marques Colston, Reggie Bush, Deuce McAllister, Devery Henderson, and the rest of the squad was special, and we knew it. Tom Benson backed away from his threats to move the team. The NFL stopped floating the LA Saints and the San Antonio Saints and the Oklahoma City Saints.

And after years of heartbreak and pain, after rebuilding both a city and a team, Drew Brees helped the Saints achieve what had only been a long-shot dream for Saints fans for 40+ years: he won a Super Bowl.

Since that season, players have come and gone. Coaches not named Payton, the same.

But nothing was as consistent as the man wearing #9.

Four thousand yard seasons. "S." Plural. As in multiple ones.

Just about every passing record in the NFL's books has his name next to it. And the only ones that don't are only because of a couple of unfortunate injuries allowing some other scrub named "Brady" to push past Brees. Barely.

But here's the reality: all of those records and that trophy and everything else, all of it is great, and all of it pales in comparison to what Brees really gave the city of New Orleans, and all of the fans across the wasteland that was the Gulf Coast in September of 2005: a second chance.

Brees got his second chance there, too. And that's what made the connection so strong. After tearing his rotator cuff, San Diego decided they didn't trust Brees enough to come back.

That was a mistake.

The Miami Dolphins were reported as Brees' preferred landing spot. Doctors there said they didn't trust him enough to sign him.

That was a mistake.

The Saints took a chance. They were hurt, too. They didn't know if they had it in them to come back, either.

And together, the city, the team, and the quarterback, did just that.

In those months after the storm, and the months after the following season, we wondered what would happen. Would Tom Benson take our only hope, our only respite, away from us, for a little more money? Would the NFL, who Saints fans still have a, let's say stressed, relationship with, push him to do so, and remove from us our one bright light in the proverbial storm hanging over our heads?

Would we be burning jerseys and having to find something else to do for a few hours every Sunday to fill that void?

Drew Brees squashed those concerns by simply playing football, by rewriting record books, by winning - something we weren't used to in the past.

I could recap every moment of joy he brought to that city. I could recount every memory of a game I sat through. I could talk about the leadership he showed while the Saints seemed to be lacking it, when they needed it most.

Instead, I just want to say thank you, Drew.

I didn't always see eye to eye with your politics, or your business decisions. You threw plenty of interceptions that made even my mama cuss.

Without you, I wouldn't have a picture of my dad, who lived long enough to get one before his time on this rock ended, wearing a shirt with YOUR face on it, opening a bottle of champagne on a night I can barely remember and will also never forget, hanging on my wall.

And I don't give a damn what anyone says. You're the GOAT.

Thank you for saving our team, Drew Brees.

Thank you for saving our city.

You've damn sure earned it.