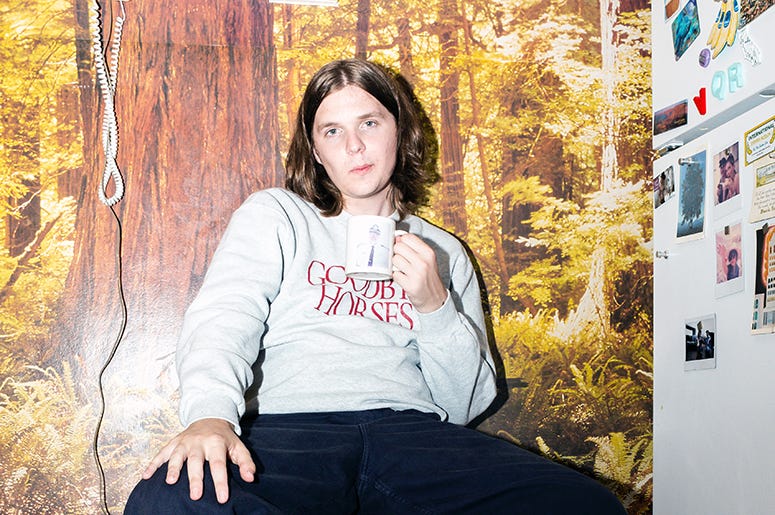 This week’s RADIO.COM Alternative Pick of the Week is JAWNY's "Sabotage."

Bay Area-bred songwriter/multi-instrumentalist JAWNY (fka Johnny Utah) makes music that lives way outside the limits of modern-day bedroom pop. A self-taught producer with a savant-like ability to come up with addictive melodies, he instills his songs with both raw emotion and outrageous humor, brightening each track with unexpected elements of soul and funk and R&B. With an instinct-driven process he describes as “very scatterbrained and manic and all-over-the-place”—and a happily warped musicality equally inspired by Luther Vandross and STRFKR—the L.A.-based artist creates all his output in his self-built home studio, with no one else around.

“I prefer to work alone, ’cause I’m a little weirdo, and because being alone allows you to be way more vulnerable than you’d ever be in front of other people,” says JAWNY. “I don’t have to worry about sounding silly; I can just be whoever I want in that moment.”

JAWNY channels his heart-on-sleeve sincerity and goofball sensibilities into songs like his recent single “Anything You Want.” With its jangly guitar riffs and dreamy falsetto, the funk-infused and feel-good track showcases the wildly original songcraft JAWNY’s previously displayed in hits like “4Tounce”—a November 2019 release that premiered as a Beats 1 World Record on the Apple Music show from Zane Lowe, who noted he’s “never been more excited about a hybrid artist since Beck.”

Born Jacob Sullenger, JAWNY grew up outside Oakland and started playing guitar when he was just six-years-old. At age 13, he downloaded FruityLoops and began making beats with his brother, eventually landing placements with several rappers in the soundcloud scene of the late aughts. “I was mostly making beats ’cause I never thought I could put out anything with me singing on it, ’cause I don’t have a great voice,” says JAWNY. “All I wanted to do since I was a little kid was make music, and that seemed like the best way to do it.” But soon after moving to Philadelphia in his late teens—“Someone told me it was one of the most affordable cities to live in on minimum wage,” he explains—JAWNY experienced a life-changing revelation. “At the time I had a girlfriend who was really into the underground DIY music scene, and seeing all these people who were making music on their own made me realize there was nothing stopping me from doing that too,” he recalls.

While working as a fry cook at a chicken-and-egg-sandwich spot, JAWNY started writing songs that merged his live performance on guitar and bass with artfully constructed beats. “I made my first song and I didn’t hate it, and then I made another song and I didn’t hate that either,” he says. “It all just kind of clicked.” By 2017 he’d gained a cult-like following online thanks in part to a series of viral videos posted on Twitter, and in 2018 drew acclaim with a self-titled debut EP made under the name Johnny Utah. In 2019, he widened his fanbase with the release of “Honeypie” (a lovestruck bop built on beautifully shiny groves and a video that has amassed over 8 million views on YouTube), “4Tounce” (a track TIME praised as “R&B-inflected surf-rock infused with the woozy spirit of young love”), and the incredibly infectious funk anthem “Anything You Want”. As record labels came calling, JAWNY signed with Interscope at the end of the year.

JAWNY also makes a point of bringing his hyperactive imagination to his music videos. (Reflecting on the off-the-wall visual for “4Tounce,” he says, “I had a vision: beefy boys, oiled up, on a Tuesday, guys being dudes, working out, getting shit done.”) That untamed creativity extends to his live show, where his two best friends join JAWNY on bass and drums to deliver a dose of joyful mayhem. With a penchant for pulling dozens of audience members onstage for an ecstatic sing-along at the encore, JAWNY says he ultimately aims to create “a really fun environment that’s totally safe for everybody.”

“Onstage I really just try to be myself, and myself is someone who wants to make people laugh and have fun—I’ve always been this goofy kid just bouncing off the walls,” says JAWNY. “So when people come to my shows or listen to my songs, the only thing I really want is for them to feel good. And at the moments when I’m not feeling good myself, it makes me feel better to know that my music’s out there in the world, making someone else happy.”

JAWNY released his debut major label project, For Abby, on Interscope Records in October 2020. Written in his bedroom in Los Angeles, For Abby features a collection of songs showcasing his restless creativity and eclectic aesthetic.