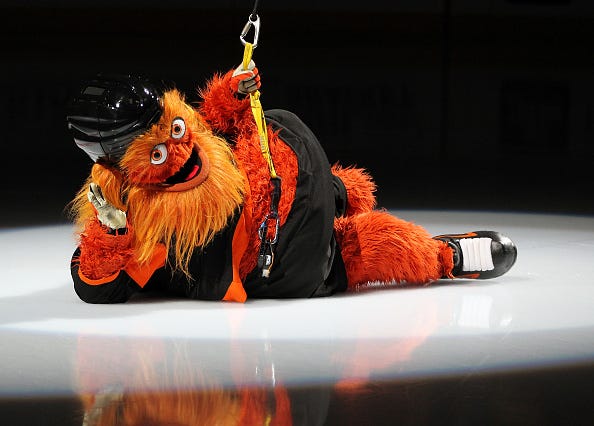 “Gritty looks like the end result of the orange McDonalds fry guy hooking up with Grimace.”

Given the response that Gritty initially received, both locally and nationally, some organizations would have admitted defeat and cut their losses with the mascot. Dave Raymond - who was the original Phillie Phanatic, and is the founder of Raymond Entertainment, a company that brands itself as “mascot branding experts” - was asked to be a consultant as the Flyers began to develop a new mascot nearly two years ago. He cautioned the Flyers to expect more negative responses than positive responses upon the unveiling of the organization’s new mascot.

Check out this kid’s reaction to @grittyNHL 😧 pic.twitter.com/szrIYb1Kwc

“I certainly expected that there was going to be a much larger negative reaction than there was positive, because it’s the nature of that business or that format (social media),” Raymond said. “You’re not sharing positive things that get shared, as much as creative negativity.”

Raymond says that months before Gritty was “born,” his daughter texted him concerned that he may be involved in developing a rumored “Phanatic at the Flyers games.” He conceded to his daughter that he was involved, cautioning that he was aware of some of the coming vitriol. What made him enthusiastic about the chances of Gritty being a success was that the Flyers entered the development of Gritty with that same understanding.

.@Ike58Reese, you should have given @GrittyNHL some Ike Juice. pic.twitter.com/J1Uk0Lp3mL

“One thing that made me excited was that the Flyers were saying ‘We know it’s coming, and we’re prepared for it. We’re not going to let that deter us.’ That’s one of the main things that we teach, that you have to be committed,” Raymond said of the development process. “If you’re not committed and you’re frightened by it [any potential negative backlash] enough that you will abandon it, then this will not work.”

Rather than being turned off by any negative reaction to Gritty, the Flyers embraced the criticism that their seven-foot, furry mascot with googly eyes received by going on the offensive on social media.

Gritty’s first tweet simply read “It me.” Gritty retweeted a variety of accounts using the now famous head-whip GIF at his introductory press conference. When he slipped on the ice during the Flyers Oct. 24 preseason game against the Boston Bruins, his personal account laughed along with the internet asking “Why didn’t anyone tell me the ice is this slippery?”. And, because of course, he recreated Kim Kardashian’s famous “Break the Internet” magazine cover, during a time when he quite literally was breaking the internet.

Raymond, who remembers a time that the Phillies feared that the Phanatic wouldn’t be accepted, says the turning point in Gritty’s quick ascension into becoming an endearing figure was a Twitter exchange with the Pittsburgh Penguins official account. The Penguins quote-tweeted the aforementioned “It me” tweet with the response “lol ok.” Gritty, in a move that already seemed to be on brand, responded by saying “Sleep with one eye open tonight, bird.”

In a world where so many organizations and public relations firms are scared of criticism, those behind Gritty took a realistic look at today’s social media climate, and made the calculation that embracing negativity would almost catch Gritty’s internet detractors - “haters,” as he likes to call them - off guard. That plan of attack turned Gritty into an endearing figure.

Raymond went from being an intern for the Phillies that agreed to don the Phanatic costume to helping the Flyers to develop a mascot they hope will have the same type of staying power.

“You want to treat him like Disney treats Mickey Mouse - Mickey doesn’t just go anywhere,” Raymond said. “And to this day, when the Phillies are in Florida for Spring Training, that’s the only place that the Phanatic is making appearances at. That’s the playbook that the Flyers will remain consistent with, and I really think that’s the reason some characters have shelf lives - and some of the other characters don’t.”

Raymond says that a change in direction or leadership - or an organization that becomes indifferent to their mascot - is the reason why once-popular mascots like the San Diego Chicken and Billy the Marlin have had shelf lives. The Phanatic didn’t - and he says it’s because like the Flyers, the Phillies didn’t “poo poo” developing the character behind their mascot.

“Imagine if all organizations understood the power that Gritty demonstrated - it would be amazing.”