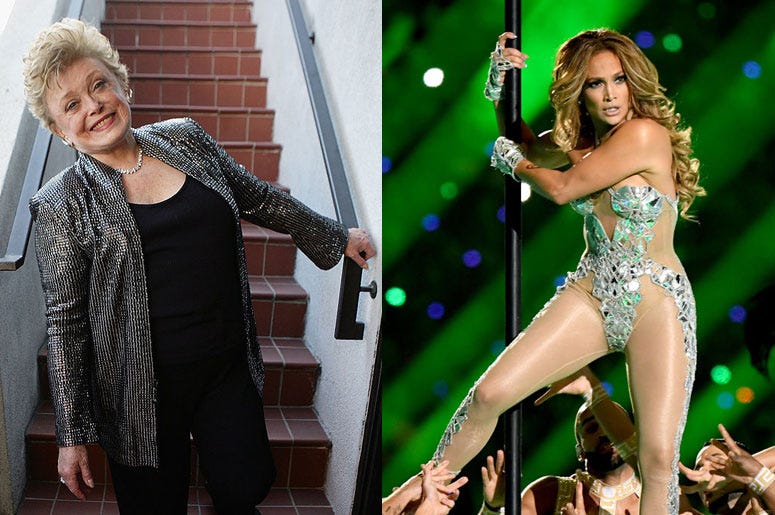 The pop-artist brought her A-game with a Latin-tinged, sexy Super Bowl halftime show that spanned decades of singles and career milestones.

In addition to singing and dancing, Jlo even showed off some of the pole dancing moves she picked up while training for her Golden Globe-nominated role of Regina in “Hustlers.”

There were plenty of standout moments from the show that went viral and spawned memes, including Shakira’s tongue action, a gesture known as a traditional Arabic celebration chant called a zaghrouta that was dedicated to her Lebanese father. The 43-year-old popstar shared the stage with “Jenny from the Block” and mesmerized with her biggest hits and belly dancing.

The second-most popular meme from of the night focused on age and contrasted how women in their 50s look like now vs. 35 years ago.

The side-by-side meme compares 50-year-old JLo with a slightly older Rue McClanahan when she played widow Blanche Devereaux in 1985’s "The Golden Girls.”

Thanks Mike Rose for meme of the night!

In the meme, a toned Lopez is shown with her legs wrapped around a stripper pole during her routine with the words “50 years old in 2020” written above.

In comparison, McClanahan is shown in character wearing a more conservative look with the words “50 years old in 1985.”

Times may have changed in terms of appearance, but one thing has remained the same – both women have owned their sexuality, embraced their age, kept it sassy, vibrant, and sexy, and never let age define them.