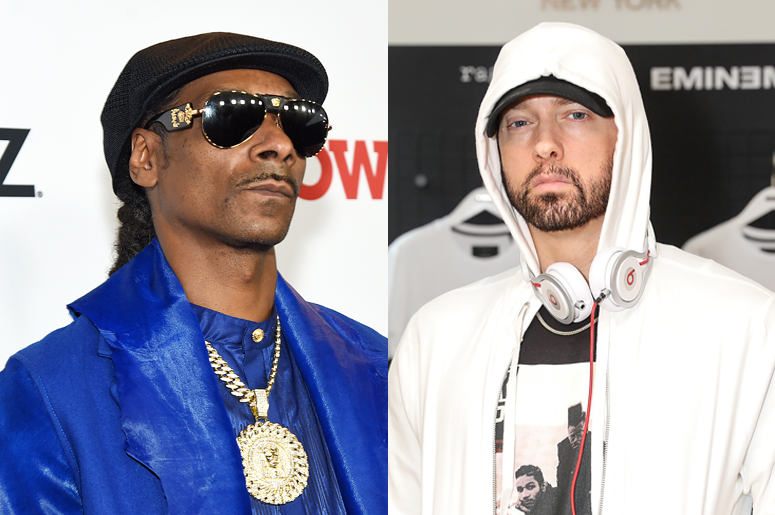 The origin of the Snoop Dogg, Eminem beef, that was recently reignited by Em’s new album Music to Be Murdered By – Side B, might have just been revealed

It was just last month the Eminem made headlines for his hostile lyrics towards a handful of chosen musicians, plus one apology to Rihanna. Snoop Dogg was just one of the many on the receiving end of Em’s quick-witted diss tracks. Not one to retreat with his tail between his legs, Snoop barked back at Slim Shady with some indirect messages on Instagram.

As previously reported, some believed the animosity started when Snoop revealed his top 10 list of all-time rappers back in July, which the Detroit rapper was not on. We’re now hearing rumblings, the hostility between the two stems from something different entirely, which allegedly started off by Eminem.

Appearing on new audio social networking app Clubhouse with Royce Da 5’9”, N.O.R.E. and Joe Budden, Death Row rapper Daz Dillinger offered up what he believes to be the explanation behind the rappers’ apparent feud. Claiming Snoop was upset with Eminem for saying “no,” declining to appear on an album.

“When I was talking to Snoop one time, he said that he asked Eminem and them to get on his song, to get on his album and they told him 'No.' And Snoop felt like, 'I did all this and all that, and they tell me ‘no?!' Nobody tells me ‘no’!’”

Daz went on to note that he thinks the whole situation was probably a big misunderstanding. ”Eminem probably even didn’t know that Snoop asked to do a song," he said. "That was probably Paul Rosenberg or somebody saying 'No!' He probably even didn’t get to Eminem that Snoop wanted to do a song with him. But [Snoop] took it personally and that’s why you never heard a song from Snoop and Em since then,” Dillinger added, referring to Snoop and Em’s appearance on Nate Dogg’s “B**** Please.”

Well, however the beef began, the unanimous conscious from all involved in the conversation was that a battle between the two would be more than just unnecessary, but also unwanted.

In total agreement, Royce added, “No upside to that. The kind of contributors that they both are, I don't think that's a good idea on no level." Check out the entire convo above.