Bindi Irwin, 22, and her husband gave fans a “bump date” by recreating the maternity shoot her mother and late father took many years ago.

The touching tribute shows the first-time dad, 24-year-old Chandler Powell, kissing his wife’s pregnant belly while at the family’s zoo in Australia.

The throwback photo also shows Bindi as a young girl holding her mother’s hand. Bindi’s mother, Terri, was presumably pregnant with her youngest son, Robert, at the time the photo was taken. Robert is now 17. 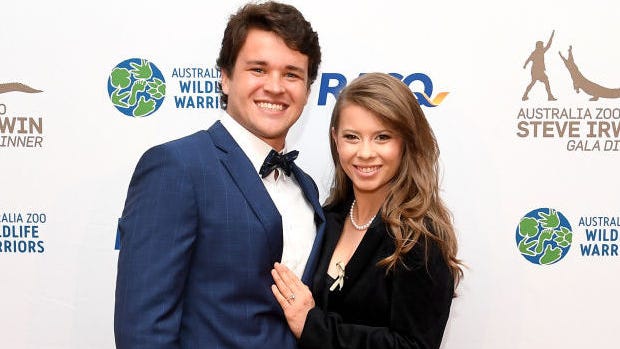 Powell is dressed in his usual zookeeper’s uniform which matches his late father-in-law's clothing in the old photo.

The family zoo’s, which was founded by Bindi’s grandparents Bob and Lyn Irwin in 1970 and is now owned by Bindi’s mother, shared their support for the young expecting parents, commenting, “You’re going to be the most incredible parents. We love you Baby Wildlife Warrior💚🎉”

The soon-to-be family of three is expecting a baby girl.

Last month, Bindi and her husband spent the holiday celebrating their very first Christmas as a married couple. Irwin and Powell tied the knot in March and announced their pregnancy in August of 2020.