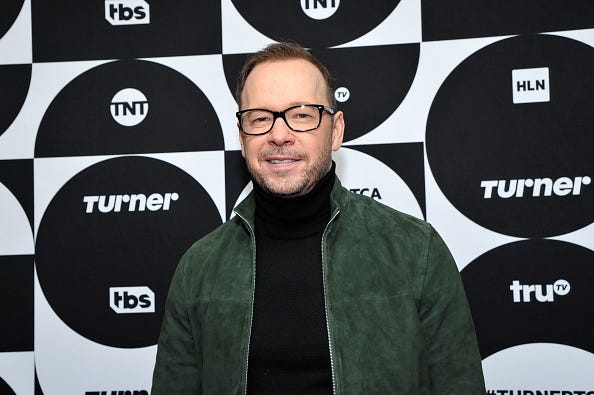 Donnie Wahlberg started off 2020 by tipping way more than 20%!

After dining at an IHOP near his home in St. Charles, Illinois, the New Kids on the Block member celebrated the new year by leaving his server a festive tip.

Wahlberg’s wife, Jenny McCarthy, shared a snap of the receipt which revealed a $2,020 tip on a $75 bill.

".@DonnieWahlberg starting 2020 off like the amazing man he is. #ihop #2020tipchallenge," McCarthy tweeted on New Year's Day

Many fans commented that the #2020tipchallenge was a great trend to start off the new decade and commended him on his selfless action.

According to People, the challenge seems to have started when a server in Michigan received a $2,020 tip on a $23 bill.

The IHOP server, Bethany Provencher, spoke with People shortly after and revealed, “I’ve loved Donnie my whole life—I was a very big New Kids on the Block fan when I was a kid,” adding, “I didn’t want to freak out at the table, so I went into the bathroom and freaked out a little. I was like, ‘oh my god!'”

“I served them the best I could do,” she says. “He folded up the receipt and he gave it to me, and told me not to open it until he left. I said ‘okay, thank you, guys, come again. I’ll take care of you again.’ Then I open it, and I almost fell to the floor,” she recalled.

The boy band member Wahlberg is known to be a generous tipper having tipped $2,000 on an $82 meal at a Waffle House in North Carolina back in 2017.

At the time, he explained that he has a deep appreciation for those in the serving industry because his “mom waited tables” and his dad “tended bars” for years.

"So, when I walk into a #WaffleHouse, and the staff treats me like a king, you better believe I treat them like queens! Thanks to the team at @wafflehouseofficial Charlotte, NC!,” he added.