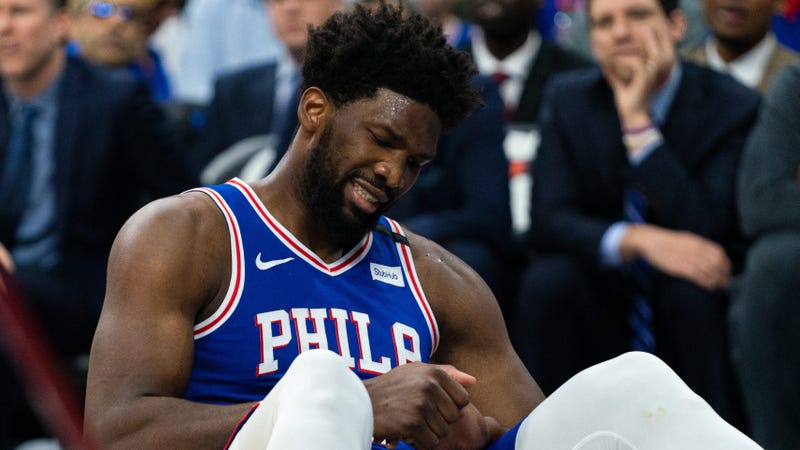 It wasn’t the prettiest of victories, for more than one reason.

Basketball wise, the Sixers let the Thunder hang around more than was necessary in their 120-113 win to end their four-game losing streak. That being said, a win is a win, and Oklahoma City had five in a row, as well as nine out of 10 heading into Monday night. Billy Donovan is getting his squad to over-achieve this season, now with a 20-16 record.

Hoops aside, the headline in this one deals with the left ring finger of franchise crown jewel Joel Embiid. By the latter moments of the first quarter, this finger wasn’t pointed in the correct direction.

“Yeah, I nearly threw-up when I saw that,” Ben Simmons said.

The big guy got his fingers taped, played through the pain and scored 18 points on seven-of-17 from the floor.

“It was pretty bad,” Embiid said of the pain. “I was basically playing with one hand.”

He also grabbed nine rebounds to go along with a season-high eight assists.

“The situations I was in allowed me to be a playmaker and not a scorer, so I just rolled with it and I’m glad we got the win.”

“That is a tough return to the court,” Brett Brown said. “That is a competitive statement.”

Josh Richardson led the Sixers with 23 points. Every starter scored in double figures, in addition to Trey Burke off the bench.

*Embiid’s Toughness—While this may seem like a nothing injury, hurting your fingers in basketball are no joke, especially since you need you fingers to a shoot, grab rebounds and simply hold the ball. It certainly wasn’t his best game of basketball, but Embiid deserves credit for coming back and playing through this. Whether or not he suits up Thursday against the Celtics at Wells Fargo Center remains to be seen, but if he doesn’t, it’s understandable.

*Starting 5 Turning A Corner?—Much has been made throughout this season about the awkward fit of the starting five’s skill set. It’s a complicated puzzle for Brown because Al Horford and Embiid are similar players, and Simmons won’t shoot three’s. The fact each scored in double figures Monday, with some of them in foul trouble, is a good sign.

*Home Court Dominance—There is something to be said about the Sixers 17-2 home record. It’s like they’re a completely different team execution and effort wise than when they’re on the road. The team I’ve been watching on TV when they’re not in South Philly is sloppy and disjointed. The team I see in person when sitting in press row at Wells Fargo Center looks like they can compete with anyone in the NBA. If the 76ers ever figure out how to fix their 7-12 road record, which is the worst of the top five teams in the East, I think it will put the rest of the league on notice.