The vice president and California senator sparred on a number of topics including coronavirus, a COVID vaccine, the Supreme Court and climate change.

The debate was more subdued than last week’s first presidential debate, in which President Donald Trump and former Vice President Joe Biden frequently spoke over each other.

Find a recap of major moments from this 2020 vice presidential debate below.

The first great dividers of the evening

The debate was pronounced for its extensive coronavirus safety measures, which included socially distanced seats, temperature checks at the door, and, on stage, two massive plexiglass dividers between the seated candidates. 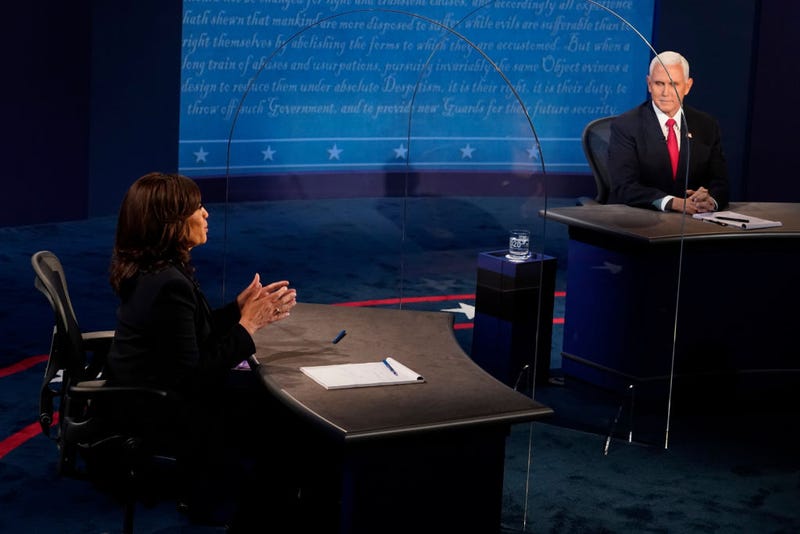 The Trump-Pence campaign had argued it was unnecessary before relenting on Wednesday afternoon, dropping its objections to having a plexiglass divider near the vice president.

Defense and offense on coronavirus

The event kicked off with a robust discussion of the pandemic at the front of everyone’s mind.

Harris spoke first, arguing that Joe Biden would take bold steps in fighting COVID-19. “They don’t have a plan, Joe Biden does,” she said.

Pence defended the Trump administration’s response to the virus. Pence referred to the various “medicines and therapeutics” developed under the administration. In a response to a question about the recent “super-spreader” event in the White House Rose Garden, Pence also said that he and Trump “trust the American people to make choices in the best interest of their health.”

Both candidates attempted to own the success of a vaccine on behalf of their campaigns.

Pence suggested a vaccine was on the horizon, confidently proclaiming: “We believe we’ll have millions of vaccines by the end of the year.”

Harris said the race to a vaccine would be integral in Biden’s response to coronavirus, and took a dig at Trump’s overseeing of a vaccine. “If Dr. Fauci, if the doctors tell us that we should take it, I’ll be the first in line to take it. Absolutely.” Harris said. “But if Donald Trump tells us to take it, I’m not taking it."

Pence and Harris butted heads on Trump’s nomination of Amy Coney Barett for the Supreme Court.

Pence touted Barrett’s qualifications, and defended his pro-life stance amid a question about the ramifications of Roe v. Wade.

Harris stressed that she and Biden are both people of faith, and told voters that Barett would attempt to overturn the Affordable Care Act.

Pence and Harris clashed on the topics of racial and unrest during the debate.

When asked about Breonna Taylor, a black 26-year-old woman in Louisville, Kentucky who was shot and killed by police officers during an attempted search, Harris said: “Her life was taken unjustifiably.”

Find full coverage of the 2020 Election on RADIO.COM.