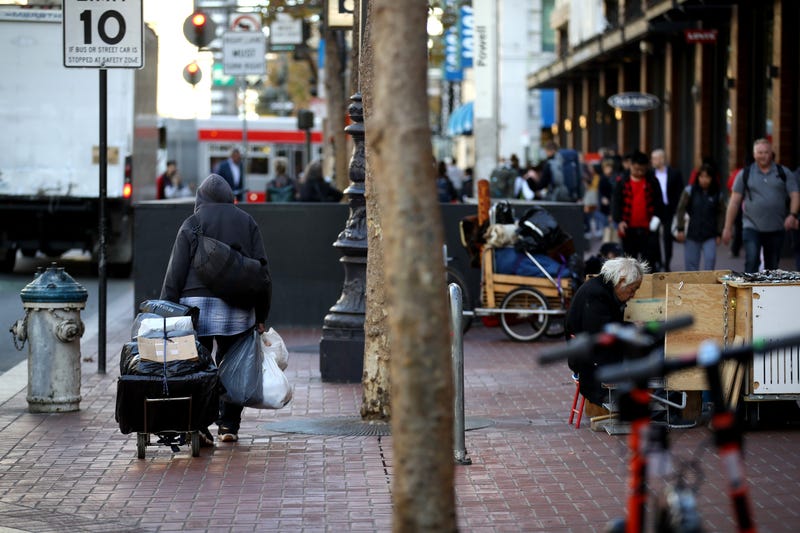 December 9, 2019 12/09/2019 8:05 pm
This week's KCBS Special Report, "Broken Systems," was inspired by the recent trial and conviction of a homeless man named Michael Watkins.  He’s a habitual street offender. In fact, just days after his release from Santa Rita Jail last month, he was arrested on on new indecent exposure and lewd conduct charges for which he’d just done time.
And there are more Michael Watkins out there — we see them every day. In Part 3 of "Broken System," KCBS Reporter Doug Sovern​ focuses on the Bay Area's chaotic street scene. Click here for parts one and two.

There are now believed to be close to 40,000 people experiencing homelessness in the Bay Area. Many of them are mentally ill, battling substance abuse, or both. They’re so commonplace, that most passersby ignore them, even when they are in obvious distress.

“Oh, I am not going to check on nobody. I mean, you can’t go out there and interact with those people,” said Mary Robinson, who works at an apartment building for seniors and the disabled in the heart of San Francisco’s Tenderloin District.

Robinson rides BART into the city every morning from Oakland, making her way through sleeping people. Sometimes she encounters the unmistakable smell of urine or worse on the train or the streets, until she is safely inside her place of work.

“My heart goes out to them, but I try to have sympathy…but I don’t,” said Robinson.

San Francisco Supervisor, Matt Haney, knows this all too well. He lives on the same Tenderloin block where Robinson works.

“[One thing that is> really frustrating is [that> the city makes it hard sometimes for regular people to know what to do. Who do you call? Who actually can help? Who do you report to?” said Haney.

He’s made cleaning up these streets his top priority.

“If we get used to this reality [and accept that this> is going to be the way it is, I think that is a sad and unacceptable statement on where we are as a city right now,” said Haney.

On the other side of the Bay Bridge, however, things have improved a bit, especially in Berkeley, where Michael Watkins was arrested.

Stuart Baker, executive director of the Telegraph Business Improvement District, gives some of the credit to UC Berkeley, for assigning a social worker to help Telegraph Avenue’s hardcore regulars get mental health help and housing.

“You have the characters that exist on Telegraph that are absolutely harmless, that are colorful in that regard. We’re a live-and-let-live place,” said Baker. “But when you do commit a crime, our hope is that there is some sort of resolution.”

But Baker expressed frustration that calling 911 rarely leads to a long-term solution for some individuals on the streets.

“The criminal justice system really doesn’t have the ability to work with this group of folks. It sometimes feels like a revolving door that gets folks really frustrated,” said Baker.

That is part of what leads defendants like Watkins back out on the street with no help.

“It’s like the police know that these guys are over here, but there’s nothing they say they can do,” lamented Robinson. “They arrest them, they put them in jail and the court system lets them run back out. Something’s got to be done. This is just bad.”

Baker and Haney said that any actions taken by a city or county to address the growing number of people living on the streets shouldn’t be about criminalizing homelessness; it should be about marshalling the resources to bring more mental health and substance abuse intervention to the streets. However, these are resources that, at the moment, don’t seem to exist.

“That’s just an absolute tragedy and there’s no way to sugarcoat that,” said Baker.