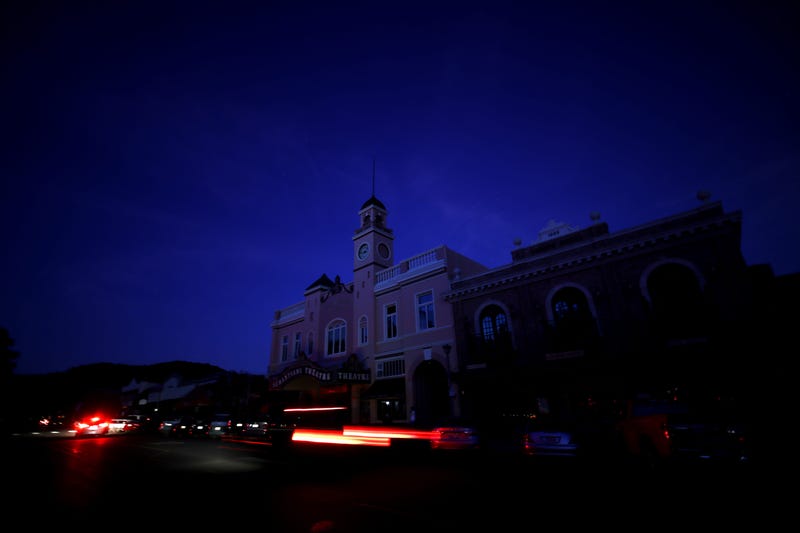 PG&E began cutting power overnight to thousands of customers in Napa and Sonoma counties as winds picked up, increasing the risk of a wildfire. A wind advisory is in effect Tuesday at higher elevations in the North Bay.

Schools have had to cancel online classes and many medical appointments have had to be rescheduled. The power outages have also put out traffic lights at major intersections causing backups.

About 172,000 customers across 22 counties have lost power, which is roughly half a million people.

In Sonoma County, 17,000 customers have been impacted, from Eastside Santa Rosa to the city of Sonoma. In Napa County, 5,700 customers in Calistoga, Aetna Springs, Berryessa Estates, parts of Pope Valley and the eastern slopes of St. Helena have also lost power.

There are hundreds more shutoffs in other parts of Northern California including Humboldt, Nevada, El Dorado, Calaveras and Tuolomne counties.

"In the elevated terrain of the North Bay we could see peak gusts in general 40 to 50 miles per hour," said Scott Strenfel, meteorologist with PG&E. "But I wouldn’t be surprised if our weather station on Mount Saint Helena, or others over elevated peaks and ridges were 60+ in this event."

The fear, of course, is that those strong wind gusts will knock trees into power lines or send the lines crashing down, sparking a wildfire.

"We saw many historic temperature records shattered during this heatwave and unfortunately the continued hot and dry weather is going to continue to dry out vegetation across California," said Strenfel.

Customers along the peninsula also lost power overnight due to soaring temperatures but service in those areas has already been restored and likely was not caused by a wildfire safety shutoff.

"We’ve committed to restoring 98% or more of our customers, regardless of the size of the event, within 12 daylight hours of the weather all clear," said PG&E incident commander Mark Quinlan.

The wind advisory posted by the national weather service runs until 11 p.m., which could mean that customers are without power for at least a full day.

A number of community resource centers have open for those without electricity to get bottled water and snacks, access Wi-Fi and charge their devices. This includes the Luther Burbank Center and Costco in Santa Rosa and several churches or Catholic schools in the cities of Sonoma and Saint Helena.

Customers can find estimated restoration times and an outage map on PG&E's website.

For the sprawling Oakmont Village retirement community in Santa Rosa, this is its sixth PSPS event in two years, and resident Pamela Townsend said it’s getting old.

"Yesterday was the worst that I’ve ever had because the outside temperature was 109, inside it was 87," she said.

Donald Edwards of Santa Rosa picked up one of the last bags of ice at the Oakmont Village Market, which has a large generator, and he told KCBS Radio that he thinks PG&E has failed its customers.

"I just think they haven’t been preparing properly over the years, and CPUC has let them get away with it," he said.

PG&E said it expects to have the power restored by Wednesday night.