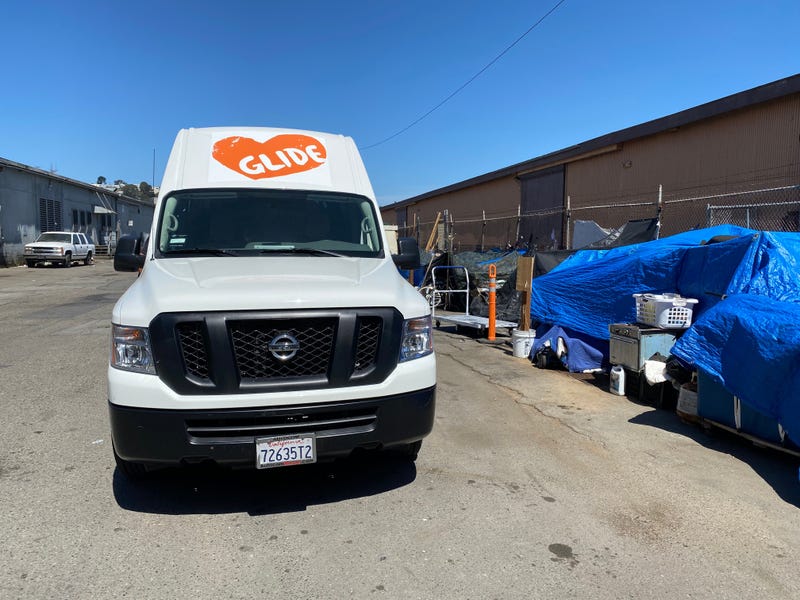 In our new series, “A Place to Shelter,” KCBS Radio examines how the COVID-19 pandemic is prompting San Francisco to adapt its approach to the homelessness crisis.
In Part One of the series, KCBS Radio’s Kathy Novak reports on how coronavirus has changed the situation for some people living on the streets.

It’s a sunny afternoon in downtown San Francisco, and Siyon is stopping the few people who pass by to ask for help buying a blanket.

“Right now, I am pretty much on my way to prepare for this evening, because I do have to sleep in a doorway,” he says.

For the thousands experiencing homelessness in San Francisco, it has always been hard to find housing. A one-bedroom apartment commonly rents for $3,500 a month, and the minimum wage is about $15 an hour.

Siyon became homeless after his four-year-old son was shot.

“No parent should have to bury their child,” he says. He was working in retail at the time. “I quit my job as an assistant manager when that happened. I told my boss I can’t concentrate and focus on my job with what I’m dealing with emotionally.”

He has a social worker and is on a waiting list for housing.

Before social distancing, he might at least have been able to get a bed for the night in a shelter.

“There’s only a certain limit of homeless that can go inside shelters now,” he explains. “So there’s a nearby shelter - 500 beds. There’s only 200 homeless inside give or take spread throughout the building. The bunks are backed up. There’s no real distance."

The city is providing hotel rooms for unsheltered people who are most vulnerable to COVID-19, giving priority to those 60 or over or who have underlying medical conditions. It estimates about 2,200 unsheltered people meet the vulnerability criteria.

“Somebody as healthy as me, I’ll be the last on the list,” Siyon says.

Advocates want more people like Siyon transferred to hotels. The Board of Supervisors passed legislation requiring the city to procure 8,250 rooms for the homeless.

Mayor London Breed has said she “will not support a law requiring (the city) to open thousands of rooms before (it) can do so safely.”

One of the hurdles has been staffing the facilities. Later in this series, we will meet a city librarian who has been deployed as a disaster service worker at one of the city’s Shelter in Place sites.

“This time it seems they’ve left them alone,” she says. “In fact, they’ve brought a hand-washing station... I never thought I’d be passing tents out of here. I’ve passed out well over 350 tents.”

The CDC has advised that dispersing encampments can increase the potential for infectious disease spread. That is why tents are not being cleared right now.

“Now, when they’re doing some alternative things, I wonder if there’s a thought that, ‘Well, what if this works?’ You know? Because if it works, you kind of have to have an exit plan, and I don’t know that there’s been any thought that far ahead,” Castro says.

We’ll be asking some of those questions throughout this series.

In Part Two, we will visit the area of town that has become an epicenter of sorts for the converging crises: the Tenderloin.