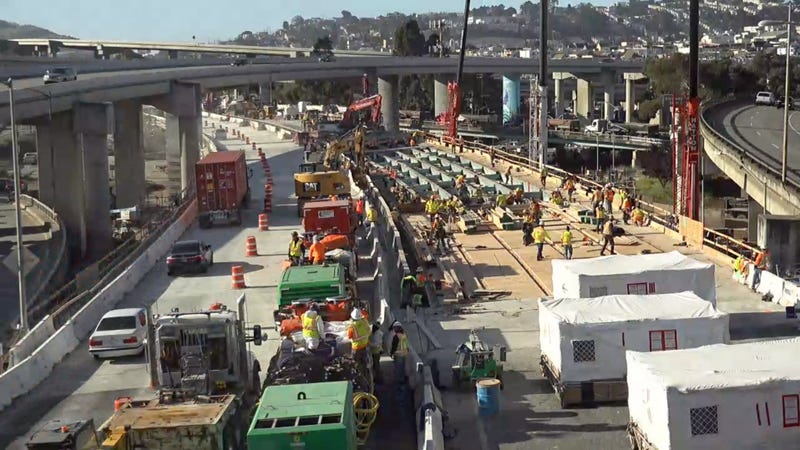 Photo credit Caltrans
By Megan Goldsby KCBS All News 106.9FM and 740AM

The big pour, which covers the new southbound bridge deck of Highway 101 near I-280, with concrete is already behind them.

"There’s still a lot of detail work we have to do before we can open this bridge up," Caltrans Spokesman Bart Ney said in a Twitter post Wednesday.

That includes smoothing and making sure the slight grooves in the concrete that help with tire friction are facing the right direction and putting electrical work into barriers.

Ney has been keeping the public and the media up-to-date on the project, using frequent social media updates to do so.

When this project was scheduled for July, Caltrans estimated it would take 18 days. Now that crews were able to do it with 40% to 60% fewer cars on the road, it’s quite a different story.

"It looks like if we’re able to keep going the way we are, we’ll be able to do it in less than 10 days," Ney said.

Delays were initially projected at more than an hour for drivers with the roads moving at full speed and volume. During the shelter-in-place, delays have been roughly 10 minutes.

That means it will be completed ahead of the scheduled Monday morning opening.

Ney did not specify a date.

news
Man wins lottery jackpot on grocery trip to buy mac and cheese
sports
Texans coach Crennel confirms Houston could be seller at NFL trade deadline
news
3 muertes, 121 casos confirmados de COVID-19 tras brote en reunión de iglesia
news
Fauci says you may have to ‘wait several months into 2021’ for COVID-19 vaccine
music
Billie Eilish on quarantine: 'If we get the orange man out, maybe we’ll get to see each other again'
music
Drake served up Mac n Cheese with raisins for his birthday, and nobody is here for that