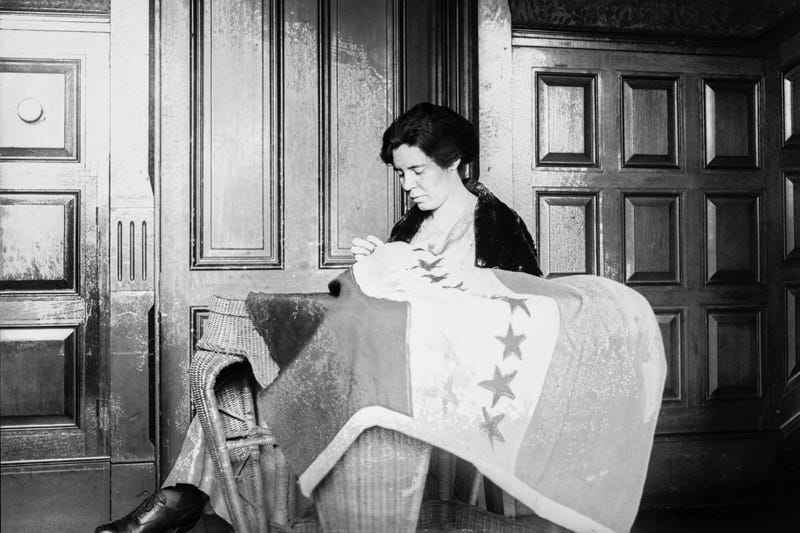 Photo credit In this 1920s photo, Alice Paul sews a suffrage flag in Washington. One hundred years ago, American women gained the guaranteed right to vote, with ratification of the 19th Amendment. But to suffragist Paul, the vote wasn't enough. She equipped herself with a law degree and got to work writing another constitutional amendment — one that would guarantee women equal rights under the law. (National Photo Company Collection/Library of Congress via AP)
By The Associated Press

It was a huge step forward for American women when, exactly 100 years ago, they finally gained the guaranteed right to vote with ratification of the 19th Amendment. But to Alice Paul, the step wasn't nearly large enough.

Paul, a suffragist who'd waged hunger strikes and endured forced feedings in jail so women could get the vote, equipped herself with a law degree and got to work writing another constitutional amendment — one that would guarantee women equal rights under the law. She introduced that amendment — now known as the Equal Rights Amendment — in Congress in 1923.

Of course, the ERA, finally passed by Congress in 1972 only to stumble during a circuitous ratification effort, still isn’t law. But feminist leaders are determined to change that now. And they feel cultural momentum is on their side for another victory nearly a century in the making.

“To call them suffragists, it sounds like they only wanted one thing," says Eleanor Smeal, president of the Feminist Majority, of Paul and her colleagues. “The vote was an important step, but they didn’t believe the vote alone would give women full equality.”

“Basically, we want to finish this,” she says. “The women’s movement is not giving up until this thing is in the Constitution, period.”

It was a joyful moment for Smeal and others when, in January, the Virginia state Legislature, under newly Democratic control, approved the amendment — becoming the crucial 38th state to cross the three-quarters threshold for ratification. But the move hardly resolved the issue, which will likely be decided in the courts over thorny procedural questions.

Still, for advocates, the Virginia vote was more than symbolic. “It’s a new day,” Smeal says. She and other activists are pinning their hopes on a Democratic presidential victory in November; Joe Biden and Kamala Harris, she says, are strong supporters of the amendment. The key change, she says, will be if the Democrats can take over the Senate, where current Majority Leader Mitch McConnell has expressed opposition to it.

Polling has indicated public support for the amendment. A February poll by The Associated Press-NORC Center for Public Affairs Research showed that roughly 3 in 4 Americans support the ERA.

And while the poll did find a significant partisan gap in views of the ERA’s adoption, majorities across party lines were in support. Nearly 9 in 10 Democrats, compared with about 6 in 10 Republicans, said they were in favor.

Another significant finding: Most Americans mistakenly thought such a provision already existed. Nearly the same amount that approved of the measure, 72%, incorrectly believed the Constitution now guarantees men and women equal rights under the law.

The heart of the amendment reads: “Equality of rights under the law shall not be denied or abridged by the United States or by any State on account of sex.” For many advocates, the urgency comes down to pay equity, and economic equality in general. This is particularly important for women of color, argues Jennifer Carroll Foy, the Virginia delegate who co-sponsored the winning resolution there.

“True justice is economic justice,” says Carroll Foy. The ERA, she says, “will not only help women but specifically women of color (in a world) where white women are paid (about) 80 cents to a white man’s dollar but black women are paid 60, Latinas 50 and indigenous women less than that."

Carroll Foy, who recently announced a bid for governor, notes the suffrage victory in 1920 did not quite have the same meaning for Black women.

“We’re celebrating the anniversary of the 19th Amendment that really only gave the right to vote to white women,” she says. “Black women still had to suffer under Jim Crow practices and poll taxes and literacy tests. Even today in 2020, ... with voter suppression tactics alive and well, there are still full populations of black women who are just as disenfranchised as their foremothers were.”

Both Carroll Foy and Smeal argue that the need for the ERA has proved yet more important during the current pandemic, in which so many essential workers are women, especially women of color.

“COVID-19 has exposed for the world what many of us already knew,” Carroll Foy says. “Many women, especially women of color, make up service and retail industry jobs that don’t provide them options of paid family medical leave, paid sick days, or telework, which places them on the front lines every single day. While we are calling these women essential, their paychecks say they are expendable.”

The path of the ERA has been a torturous one. When finally passed by the Senate almost 50 years after Paul first proposed it, all that was needed was ratification by 38 states; a deadline was set for 1979.

Smeal remembers the joy of that day in March 1972. "We of course we were ecstatic, because that was it,” she says of the moments after the Senate vote. “We had finally done it.” But one person was not ecstatic — Paul herself, then in her late 80s.

At a celebration at the former headquarters of the National Woman's Party, which Paul co-founded, “One of our people ran back and found her at Susan B. Anthony’s desk, and she was very, very upset," Smeal says. Paul felt the imposed time limit was a delaying trick by opponents from southern states. “She felt it was going to be very, very hard to pass,” Smeal says.

Paul was right. Soon, some 30 states had ratified the ERA, but the ’70s saw opposition form, led chiefly by conservative activist Phyllis Schlafly, who argued that women would lose gender-specific legal protections.

The deadline was later extended to 1982, but a needed final three states proved elusive. Momentum faded.

More recently, though, the current shifted again, as the #MeToo movement took hold and women’s advocates, buoyed by Democratic victories in statehouses, particularly of female candidates, brought the ERA back to the front burner. Virginia became the 38th state after Nevada in 2017 and Illinois in 2018.

In February, the U.S. House voted overwhelmingly to remove the ratification deadline. But in the Republican-controlled Senate, McConnell is seen as unlikely to bring it to the floor. And legal wrangling continues.

What would Paul think if she knew that in 2020, women would still be agitating for the amendment that was once named for her?

“Unfortunately, I don’t think she would be surprised,” says Smeal. “She knew how hard this was.”

But Smeal remains optimistic, buoyed by what she feels is a cultural shift. “Change is coming,” she says.