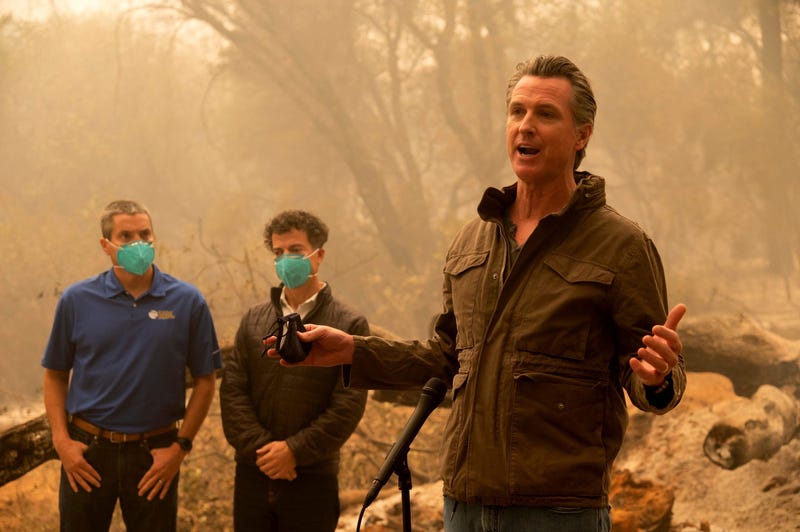 SACRAMENTO, Calif. (AP) — California Gov. Newsom offered some of his most impassioned comments on climate change, denouncing the “ideological BS” of those who deny the danger and vowing Friday to accelerate the state's already ambitious goals for reducing greenhouse gases.

Newsom spoke against a backdrop of ghost-like trees and ground covered in snow-like gray ash left by the deadliest of the record-breaking fires that have charred huge swaths of California in recent weeks.

“The data is self-evident, the experience that we have in the state of California just underscoring the reality of the ravages of climate change,” he said. “Mother Nature is physics, biology and chemistry. She bats last and she bats one thousand. That’s the reality we're facing, the smash mouth reality — this perfect storm. The debate is over around climate change."

Two Republican state lawmakers who represent the Northern California region where Newsom spoke countered that the governor is using climate change as an excuse for years of failed policies by fellow Democrats who control nearly all aspects of California government.

The state's former governor, Jerry Brown, who championed combating climate change, said Friday in an interview with The Associated Press that the massive fires in the West may get more people thinking about the role of climate change “as they cough and choke on this terrible air.”

But he said it won’t change the minds of those who view global warming as fiction.

“This is not enough,” he said. “But don’t worry, we’re going to have this over and over, with hurricanes, with flooding of subways in places in Florida and New Orleans and Texas," he said.

Newsom was more blunt, saying “unless we get our act together on climate change, unless we disabuse ourselves of all the BS that’s being spewed by a very small group of people," then time to take action will be lost.

Newsom noted that just in the last month, California had its hottest August, with world-record-setting heat in Death Valley. It had 14,000 dry lightning strikes that set off hundreds of fires, some that combined into creating five of the 10 largest fires in the state's recorded history. And it had back-to-back heat waves stretching through the Labor Day weekend.

The state's ambitious goal of using 100% clean energy by 2045 “is inadequate,” Newsom argued. “We’re going to have to be more aggressive in terms of meeting our goals much sooner.”

He said the state must push to more quickly adopt electric vehicles and other non-polluting transportation, and ordered the heads of his environmental protection and natural resources agencies to explore more changes to the state's industrial and agricultural policies.

Newsom finally called for voters to unseat politicians “across the spectrum” who deny the effects of climate change, saying he was not just criticizing President Donald Trump.

Republican state Sen. Jim Nielsen and Assemblyman James Gallagher countered that the cause of recent devastating wildfires and electricity blackouts "is decades of bad policy enacted by Democrats, not climate change.”

“The excuse of climate change cannot be used to deflect from the fundamental failure to address the fuels build-up in our forests that are the cause of these devastating fires," they said in a statement. “These same misguided policy decisions have led to rolling blackouts and an energy grid that is falling apart.”

sports
Joe Theismann: Alex Smith is NFC East's top QB, Wentz the worst
sports
Michael Jordan donates $2 million to food shelter using proceeds from 'The Last Dance'
music
Did Kelly Clarkson just reveal the reason for her divorce? 'You are who you surround yourself with'
news
Viral map shows the most popular Thanksgiving pie in each state
music
Listen To 'Coop's Rockin’ Country Saturday Night' on RADIO.COM
news
COVID-19 quarantine time to be shortened by the CDC