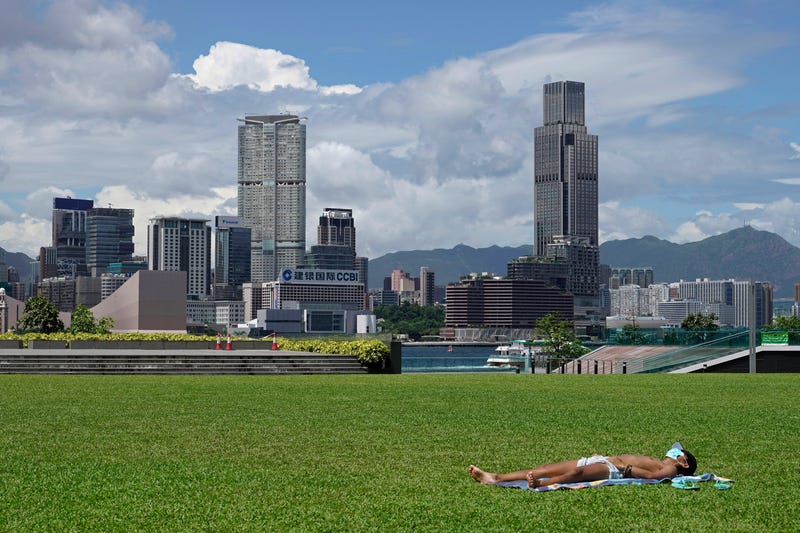 BEIJING (AP) — China is tightening travel restrictions in the Xinjiang capital amid a COVID-19 outbreak in the northwestern city.

People arriving in Urumqi from regions considered to have high infection risk must undergo a two-week quarantine. Others arriving from less risky areas most show proof of good health. Locals “in principle” must stay in the city or show proof of health to be allowed to leave.

Almost all regions in China have been downgraded to low and medium risk, except for the northeastern port city of Dalian, which is high risk due to an ongoing but smaller outbreak.

Since mid-July, the Xinjiang outbreak centered in Urumqi has seen more than 600 cases of illness, including 112 new ones reported on Friday.

Another 11 cases new were reported Friday in Liaoning, bringing the northeastern province's total to around 75 since June 22, when a seafood worker in Dalian tested positive. As with Urumqi, widespread testing has been conducted in Dalian, with more than 4 million samples taken by midweek.

No new deaths have been reported, leaving China’s total at 4,634 among 84,292 cases. A total of 684 people are in treatment and 248 being monitored for having shown signs of COVID-19 or for testing positive but showing no symptoms.

Hong Kong continued see a third wave of infections, with almost 150 new cases reported Friday to bring the semi-autonomous Chinese city’s total to 3,151 with 25 deaths. Authorities on Thursday reversed a ban on indoor dining, along restaurants to operate under limited hours and with limited capacity.

Businesses such as bars, karaoke bars and amusement parks remain temporarily closed, and public gatherings are restricted to two people.

— Victoria state’s leader warned that tougher pandemic restrictions could be looming after Australia’s coronavirus hot spot reported its second-highest daily COVID-19 count. State capital Melbourne and a neighboring semi-rural district are over halfway through a six-week lockdown. Victoria Premier Daniel Andrews said the lockdown was being analyzed to determine the next steps. “I have no announcements to make about next steps, but it is important that all of us acknowledge that these numbers are still far too high,” Andrews said. Victoria on Friday reported 627 new COVID-19 infections and eight deaths after a record 723 new cases were reported on Thursday.

— Vietnam's health ministry reported a daily high of 45 more cases Friday, all of them connected to a Da Nang hospital where the first case surfaced last week. All of the infected are hospital staff, current or former patients and their family members. The outbreak was Vietnam's first in more than three months, and it reacted quickly since Da Nang is a popular beach destination and thousands of tourists were vacationing on its golden beaches. The city was put under lockdown on Tuesday and testing and business restrictions increased in other areas. Da Nang on Friday began setting up a makeshift hospital in a sport auditorium and doctors have been mobilized from other cities to help.

— Indonesia’s resort island of Bali reopened to domestic tourists Friday after an almost four-month lockdown. Impatient to revive the economy, Bali’s governor, I Wayan Koster, began easing restrictions on public activities three weeks ago. Visitors will face stringent rules in hotels, restaurants and on beaches. New foreign arrivals will be allowed on the island beginning Sept. 11. Tourism is the main source of income for the island, which had 6 million tourists from abroad and 10 million from Indonesia last year. The pandemic has caused the numbers to dive.

— Philippine President Rodrigo Duterte further relaxed quarantine restrictions despite steep surges in coronavirus infections but will now enforce “strictly localized lockdowns” in smaller villages in the congested capital where most outbreaks occur. Duterte said metro Manila and outlying provinces will remain under a general quarantine while central Cebu city, the last major area in the country under a lockdown, will enjoy the same relaxed quarantine restrictions as the capital starting from Saturday to Aug. 15. The Department of Health reported its highest daily tally of new and old COVID-19 cases on Thursday at 3,954, bringing total infections to 89,374, including nearly 2,000 deaths. Despite such spikes, the government has been under pressure to open the economy more widely.

— Nepal is opening its Himalayan mountain peaks, hoping to bring back Western climbers unable to come to Nepal because of a lockdown during the spring mountaineering season. Both the government and expedition workers and businesses are hoping foreign climbers who bring some $300 million annually to Nepal will return during the autumn climbing season that begins in September. Nepal is opening to commercial flights from August, allowing tourists to come back into Nepal. Rudra Singh Tamang, director general of Nepal’s tourism department, said mandatory test reports and quarantines when needed are among the measures being used to ensure tourism returns safely.

— South Korea's 36 newest cases were mostly tied to international arrivals. The figures announced by South Korea’s Centers for Disease Control and Prevention brought the national caseload to 14,305, including 301 deaths. The KCDC said 22 of the new cases were linked to people arriving from abroad. The country in recent weeks reported dozens of infections among South Korean construction workers airlifted from virus-ravaged Iraq and crew members of Russia-flagged cargo ships docked in South Korean ports.