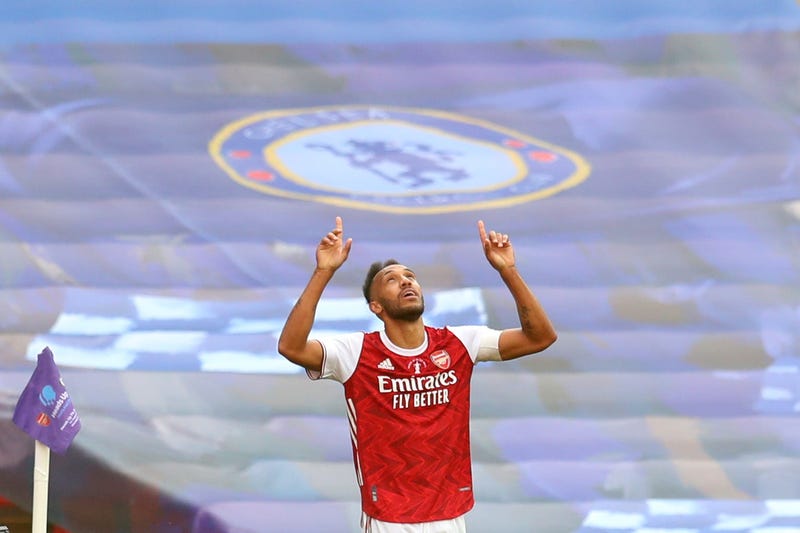 LONDON (AP) — Pierre-Emerick Aubameyang clinched a record-extending 14th FA Cup for Arsenal on Saturday, scoring twice in a 2-1 victory against Chelsea at an empty Wembley Stadium.

Christian Pulisic had become the first American man to score in an FA Cup final but his fifth-minute opener was canceled out by Aubameyang's penalty in the 28th minute after he was dragged down by Chelsea captain Cesar Azpilicueta.

A year into this pandemic-disrupted, longest-ever English season, Azpilicueta hobbled off injured in tears before halftime. Pulisic only lasted a minute after the break before also pulling up with an apparent hamstring injury.

With Chelsea unsettled by the injuries, Arsenal took control and Aubameyang chipped goalkeeper Willy Caballero from close range in the 67th.

It not only sealed Arsenal's fourth FA Cup in seven seasons. but a place in the Europa League, having only finished eighth in the Premier League.

Chelsea's hopes of forcing the game into extra time were dealt a blow when Mateo Kovacic received a second yellow card in the 73rd after softly catching Granit Xhaka. Chelsea finished with nine men in stoppage time when Pedro was forced off with a shoulder injury.

THIS IS A BREAKING NEWS UPDATE. AP’s earlier story is below:

Christian Pulisic became the first American man to score in an FA Cup final before being forced off with an apparent hamstring injury at the start of the second half.

The 21-year-old winger gave Chelsea a 1-0 lead over Arsenal in the fifth minute at Wembley Stadium on Saturday, slotting in from close range after being set up by Olivier Giroud's flick.

Pulisic's 11th goal in all competitions in his first season at Chelsea was canceled out by Pierre-Emerick Aubameyang from the penalty spot for 1-1.

But Pulisic only lasted a minute of the second half. He pulled up shouting in agony in the penalty area and managed a shot before going down clutching his right knee. He had to be helped off the pitch, with support either side while he grimaced.

The injury could place into doubt Pulisic's hopes of playing next Saturday in the Champions League round of 16 as Chelsea seeks to overturn a 3-0 deficit against Bayern Munich.

The 139th FA Cup final is the first to be played in front of no fans due to coronavirus pandemic restrictions.

Other American men to play in an FA Cup final include midfielder John Harkes for Sheffield Wednesday in 1993, and goalkeeper Tim Howard for Manchester United in 2004 and Everton in 2009.

The Women's FA Cup has already seen an American scorer in a final, with Carli Lloyd netting in Manchester City's 4-1 win over Birmingham in 2017.