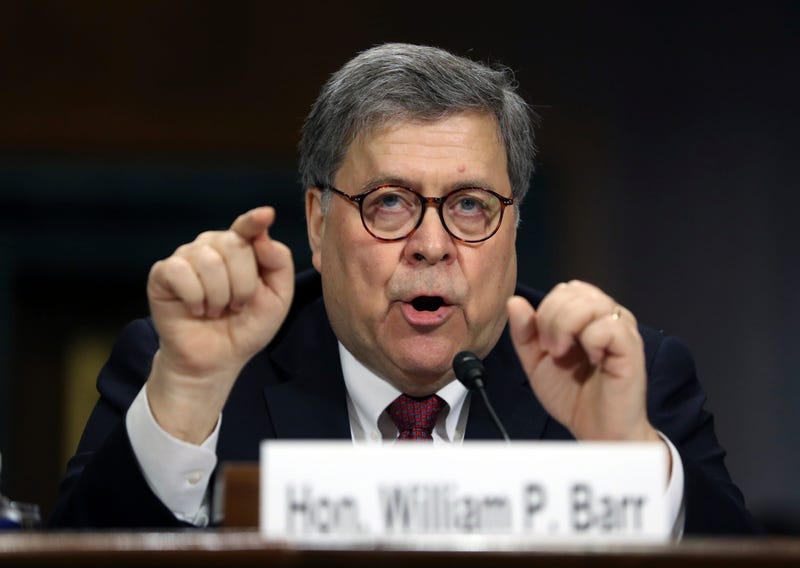 Photo credit FILE - In this May 1, 2019 file photo, Attorney General William Barr testifies during a Senate Judiciary Committee hearing on Capitol Hill in Washington, on the Mueller Report. Former FBI lawyer Kevin Clinesmith will plead guilty to making a false statement in the first criminal case arising from U.S. Attorney John Durham's investigation into the probe of ties between Russia and the 2016 Trump campaign. (AP Photo/Andrew Harnik)
By The Associated Press

WASHINGTON (AP) — The Justice Department announced new restrictions Tuesday for conducting any national security surveillance of candidates for federal office or their staff members and advisers.

The restrictions, announced by Attorney General William Barr in a pair of memos, are part of broader changes to the FBI's surveillance procedures implemented in response to problems during the 2016 investigation into ties between Russia and President Donald Trump's campaign. Coming just two months before the presidential election, the changes are designed to ensure that law enforcement officials have to clear additional hurdles before pursuing the same type of surveillance as was conducted four years ago on a former adviser to Trump's 2016 campaign.

Barr is acting on an issue that has provoked loud concerns from Trump's allies, who have seized on errors in the surveillance process to attack the underpinnings of the Russia probe even as reports from the Justice Department's watchdog and the Senate intelligence committee have laid out extensive contacts between Russia and Trump associates during the 2016 presidential contest.

The policy changes concern how the FBI goes about seeking permission from the Foreign Intelligence Surveillance Court when it wants to eavesdrop on someone it suspects of being an agent of a foreign power, such as a potential spy or terrorist. FBI Director Chris Wray has ordered more than 40 corrective actions after the Justice Department inspector general found major errors and omissions in surveillance applications targeting a former Trump aide during the Russia probe.

One new restriction outlined Tuesday would require the FBI to consider briefing a federal candidate or staffer that the person is possibly being targeted by a foreign power before applying for a warrant from the court to wiretap their communications.

Under the policy, no application for surveillance of a candidate or staffer may be submitted unless the FBI director has decided that a defensive briefing is not appropriate and has said so in writing. Applications must also be approved by the attorney general and must include a “full and complete statement as to whether other less intrusive investigative measures have been tried and failed.”

The FBI had contemplated giving such “defensive briefings” to Trump campaign officials in 2016 but decided against it for fear of compromising an ongoing investigation, according to a Justice Department inspector general report.

“We did not identify any Department or FBI policy that applied to this decision and therefore determined that the decision was a judgment call that Department and FBI policy leaves to the discretion of FBI officials,” the report stated.

The FBI in 2016 and 2017 applied for warrants to monitor former Trump campaign adviser Carter Page because of concerns about his contacts with Russia, but Inspector General Michael Horowitz identified errors and omissions in those applications and also found more pervasive problems with the FBI's surveillance application protocols. Page was never charged with any wrongdoing.

The new policy will also tighten controls aimed at ensuring the accuracy of applications submitted to the court. It is imperative that the Justice Department make “accurate and complete representations" when applying for surveillance warrants, Barr wrote.

“When those activities involve federal elected officials, federal political candidates, or their respective staff members, the Department must be especially vigilant,” he added. “Such intelligence activities must be subject to rigorous review to ensure that they are justified and non-partisan, are based on full and complete information, take into account the significant First Amendment interests at stake, and do not undermine the political process.”

In a separate memo, Barr announced the creation of the FBI Office of Internal Auditing, which will conduct routine audits of the FBI's national security activities. The FBI has been working to implement dozens of corrective steps, Wray said.

“The additional reforms announced today, which we worked on closely with the Attorney General’s office, will build on the FBI’s efforts to bolster its compliance program,” Wray said in a statement.