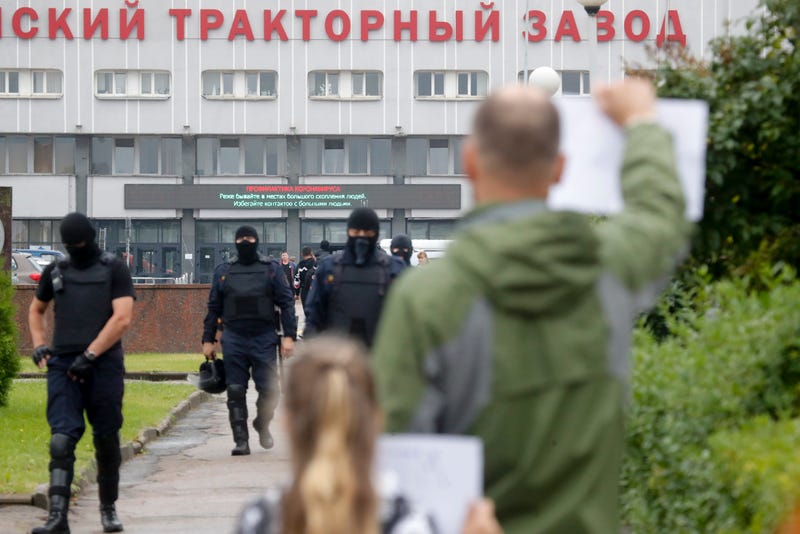 Photo credit Protesters stand in front of the Minsk Tractor Works Plant holding posters supporting workers as police walk to push them back in Minsk, Belarus, Wednesday, Aug. 19, 2020. Workers at state-controlled companies have joined strikes this week, as the unprecedented mass protests enter their 11th day and erode the authority of the man once dubbed "Europe's last dictator." (AP Photo/Dmitri Lovetsky)
By The Associated Press

MINSK, Belarus (AP) — Belarus' authoritarian leader threatened Wednesday to take tough new steps against demonstrators challenging the extension of his 26-year rule and accused the West of fomenting unrest as he sought to consolidate his grip on power amid widening protests.

President Alexander Lukashenko warned that opposition activists who created a council to negotiate a transition and new elections could face criminal charges, and he ordered his security agencies to restore order on the streets — a possible harbinger of a renewed crackdown on peaceful demonstrations.

Lukashenko spoke as the European Union rejected the official results of the Aug. 9 vote that kept him in office and expressed its solidarity with protesters. The EU said it's preparing sanctions against Belarusian officials responsible for the brutal post-election police actions.

The crackdown stirred broad outrage and helped bolster protesters' ranks. On Sunday, an estimated 200,000 people rallied around the Belarusian capital's main square. The huge crowds forced the authorities to back off, and police refrained from interfering with demonstrations over the last five days.

But faced with a widening strike that engulfed the country's biggest industrial plants, police moved again Tuesday to disperse some protests. Nearly 50 people were detained in front of the Minsk Tractor Factory, where workers have been on strike since Monday, according to Sergei Dylevsky, leader of the factory’s strike committee.

“People are on strike demanding Lukashenko’s resignation, and authorities respond with batons and riot police,” Dylevsky told The Associated Press. “Lukashenko is not changing.”

Police also blocked all entrances to the Janka Kupala National Theater in Minsk, where the troupe on Tuesday gave notice en masse after its director, Pavel Latushko, was fired for siding with protesters. Actors who arrived at the theater Wednesday morning were not allowed in.

“It’s unprecedented that in the 21st century law enforcement is deployed to a cultural institution. The situation speaks for itself,” said Latushko, a former culture minister and diplomat, who joined the opposition's Coordination Council.

The Council, which had its first meeting Wednesday, consists of top associates of Lukashenko's main challenger, Sviatlana Tsikhanouskaya, as well as rights activists and representatives of striking workers. It also includes the nation's most famous author, Svetlana Alexievich, who won the 2015 Nobel Prize in literature.

Tsikhanouskaya, who moved to Lithuania after the vote, said in a video statement Wednesday that the Council will spearhead a peaceful transition of power and help prepare a new fair presidential election. She called on EU leaders to support “Belarus' re-awakening.”

European Council President Charles Michel said after chairing an emergency teleconference of the 27-nation bloc leaders that the EU does not recognize the official vote tally and “stands in solidarity with the people of Belarus.” He said it will impose sanctions on “a substantial number” of people linked to Belarus' election fraud and violence.

Lukashenko, who has been dubbed “Europe's last dictator” in the West, defiantly dismissed the EU criticism and told its leaders to mind their own business. Belarus is not an EU member.

“They have plenty of their own problems,” the 65-year-old former state farm director said at a meeting with officials. “And they shouldn't nod at Belarus to distract attention from those problems. Those gentlemen have a log in their eyes, but they don't see it."

The Belarusian leader accused the West of financing the protests and ordered law enforcement agencies to halt the money flows. He also instructed Belarus' State Security Committee, which still goes under its Soviet-era name KGB, to “track down and stop the instigators of the unrest organizers.”

“There must be no more unrest in Minsk,” Lukashenko said. “The people are tired. They want peace and silence.”

Undeterred by his threats, several hundred protesters gathered outside the Interior Ministry's headquarters in heavy rain, shouting calls for the minister's resignation.

“They are trying to scare us,” said 20-year-old demonstrator Alexander Filistovich. “Lukashenko doesn't know other methods, but we don't fear.”

The Belarusian leader also warned members of the Coordination Council that they could face criminal responsibility for their attempt to create “parallel power structures.”

Turning to the striking blue-collar workers, Lukashenko warned that they would face dismissal and told law enforcement agencies to protect factory managers from the opposition pressure.

“If some think that the government has tilted and lost balance, they are mistaken,” he said. “We will not waver.”

Lukashenko has repeatedly spoken to Russian President Vladimir Putin since the weekend, claiming that he secured the promise of security support if Belarus needs it. The two nations have an agreement that contemplates close political, economic and military ties.

The Kremlin has warned the West against interfering in Belarus' affairs, but remained non-committal regarding security help. Putin spokesman Dmitry Peskov said the treaty includes provisions for possible assistance, but noted that “there is no need for that now.”