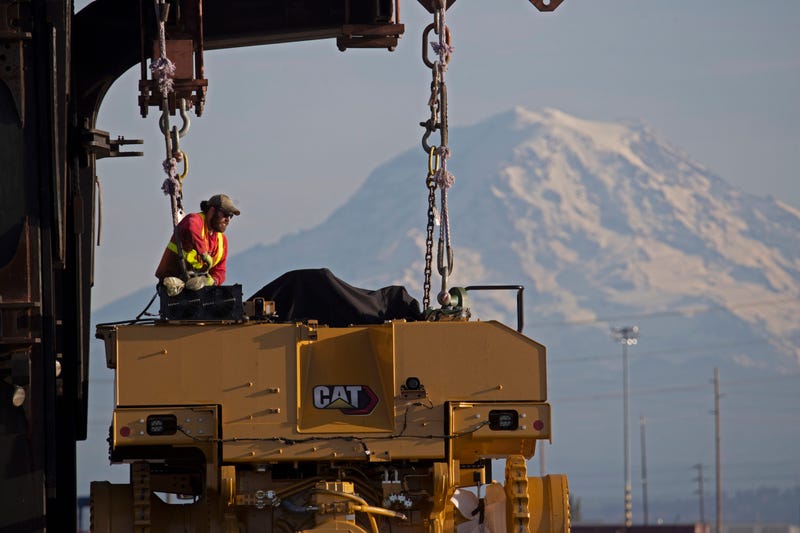 Photo credit FILE - In this Nov. 4, 2019, file photo a worker prepares a piece of Cat construction equipment made by Caterpillar to be lifted off a trailer at the Port of Tacoma in Tacoma, Wash. Caterpillar Inc. reports financial results Friday, Jan. 31, 2020. (AP Photo/Ted S. Warren, File)
By The Associated Press

Caterpillar's sales tumbled 31% in the second quarter as dealers culled construction equipment from showrooms during the pandemic.

Dealers decreased machine and engine inventories by about $1.4 billion during the three-month period, compared with an increase of about $500 million a year earlier.

Still, the Deerfield, Illinois, manufacturer topped Wall Street expectations and shares jumped sharply before the opening bell in what has been an extraordinarily difficult year.

Revenue fell to $10 billion, from $14.4 billion a year ago, better than the projections for $9.2 billion from industry analysts, according to a survey by Zacks Investment Research.

Net income was $458 million, or 82 cents per share. Stripping out one-time costs, earnings were $1.03 per share, easily beating the 66 cents Wall Street was looking for.

Earlier this month the Commerce Department reported U.S. construction spending fell 2.1% in May, with both home building and nonresidential activity declining.

The construction industry has been rocked by shutdowns. With cases rising again in many parts of the country, particularly in the Sunbelt which has driven the housing market for years, home building and commercial projects face are at threat.

But projects are moving ahead where possible, driven by extremely low mortgage rates. The U.S. reported last week that sales of new homes rose 13.8% in June, the second consecutive monthly increase.

Economists say sales could continue to rebound, but that depends on the course of COVID-19 outbreaks.

Some states that had attempted to restart their economies are rolling back those efforts as cases surge.