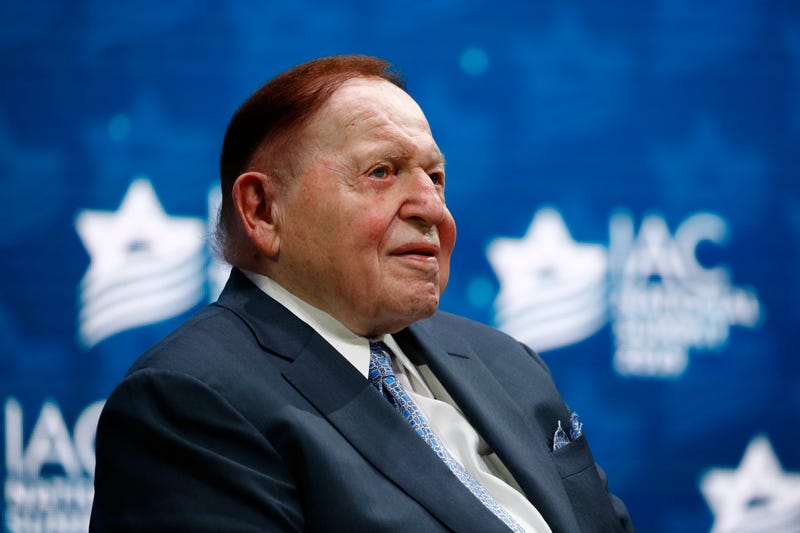 Photo credit FILE - In this Dec. 7, 2019, file photo, Las Vegas Sands Corporation Chief Executive Sheldon Adelson sits onstage before President Donald Trump speaks at the Israeli American Council National Summit in Hollywood, Fla. The State Department has informally confirmed to Congress that Republican super-donor Adelson is the buyer of the U.S. ambassador’s official residence in Israel, a congressional aide told The Associated Press on Wednesday, Sept. 9, 2020. Lawmakers in the House and Senate are now looking into whether the deal complied with regulations. (AP Photo/Patrick Semansky, File)
By The Associated Press

WASHINGTON (AP) — The State Department has informally confirmed to Congress that Republican super-donor Sheldon Adelson is the buyer of the U.S. ambassador’s official residence in Israel, a congressional aide told The Associated Press on Wednesday. Lawmakers in the House and Senate are now looking into whether the deal complied with regulations.

The U.S. Embassy in Israel announced the deal this week -- a sale that is meant to cement President Donald Trump's controversial move of the embassy from Tel Aviv to Jerusalem. But the embassy refused to identify the buyer or disclose the sale price of the sprawling beachfront compound in the upscale Tel Aviv suburb of Herzliya.

The Trump administration appears to have been in a rush to sell the property ahead of the November presidential election, both as a gesture to Trump’s pro-Israel evangelical Christian base, and to complicate any attempts to move the embassy back to Tel Aviv if he is not re-elected.

The Democratic presidential nominee, Joe Biden, has called the Trump administration’s decision to move the embassy “short-sighted and frivolous,” but he has said he would not move it back to Tel Aviv if elected president in November.

The U.S. Embassy has only said the buyer submitted the “highest and best offer.” Under the deal, Ambassador David Friedman, a driving force in the move of the embassy, will continue living at the estate until the spring of 2021, with the U.S. government leasing the property until then.

The Israeli business newspaper Globes has identified the buyer as Adelson, a strong supporter of both Trump and Israeli Prime Minister Benjamin Netanyahu. It said the price was over $80 million, making it the most expensive residential real-estate transaction in Israeli history. Representatives for Adelson, a billionaire casino magnate, did not respond to messages seeking comment.

A congressional aide said the State Department has confirmed public reports of the sale to Adelson. The aide said the “biggest question” now is how much rent will be paid by U.S. taxpayers while Friedman remains at the property. The aide spoke on condition of anonymity to discuss private information.

The House Foreign Affairs Committee has submitted several requests for information from the State Department about whether the sale followed regulations, the aide said.

Among the questions: whether a real-estate broker was used and an independent appraisal of the property was conducted. The panel also wants to know whether the agent had any political ties.

Senators from the Senate Foreign Relations Committee have requested a briefing from the State Department, according to a Senate Democratic aide, who requested anonymity to discuss the situation.

The State Department has said the buyer was selected solely on the basis of having submitted the highest and best offer. The selected buyer and the unsuccessful bidders have been notified, the department said.

However, the State Department also said it is not at liberty to comment on the details related to contracts underway with private entities.

The Trump administration moved the embassy from Tel Aviv to Jerusalem in 2018, shortly after recognizing Jerusalem as Israel’s capital. The move is one of several steps the administration has taken in favor of Israel, and led the Palestinians to cut off ties with the White House.

Nearly all foreign delegations have their embassies in Tel Aviv because of Jerusalem’s contested status. The Palestinians seek east Jerusalem, captured by Israel in the 1967 Mideast war, as the capital of a future state. Israel’s annexation of east Jerusalem, home to the city’s most sensitive religious sites, is not internationally recognized.