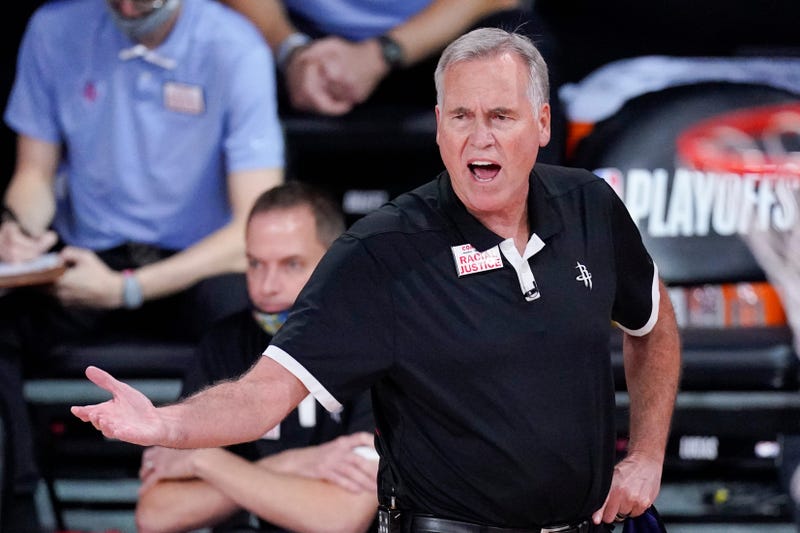 LAKE BUENA VISTA, Fla. (AP) — Mike D’Antoni has told the Houston Rockets that he will not be back as coach with them next season, essentially choosing free agency over a return to the club with whom he has spent the last four seasons.

D’Antoni told the Rockets on Sunday — not even a full day after the team’s season ended with a playoff loss to the Los Angeles Lakers — that he would seek coaching options elsewhere for next season and not return to Houston. Team owner Tilman Fertitta confirmed the move later Sunday.

“I would like to thank Mike D'Antoni and his wife, Laurel, for their incredible contributions to the Houston Rockets organization and the Houston community," Fertitta said. “Mike is a true professional and an amazing basketball mind. He is a winner, and we have been blessed to have such an outstanding coach and leader to work with the past four seasons."

It was not totally unexpected; the Rockets and D’Antoni couldn’t agree on an extension last year, meaning he was coaching this season with no guarantee of his future in Houston. D’Antoni had already been mentioned as a potential candidate for vacancies in Indiana and Philadelphia, but when the season ended Saturday night there appeared to be at least some hope of his remaining in Houston.

“We’ve got a great organization, great city, great fans, team’s great,” D’Antoni said after the Game 5 loss to the Lakers. “I mean, everything’s good here. We’ll see what happens, but I couldn’t ask for a better situation. I had four years and hopefully it keeps going. You just never know.”

But sometime between late Saturday night and early Sunday afternoon, he knew that it was time to move on.

Houston becomes the eighth team that will be going through a coaching change since the end of the regular season — March 11 for eight clubs that didn’t qualify for the NBA’s restart bubble, and mid-August for the league’s 22 other franchises.

D’Antoni was with the Rockets for four seasons. Houston went 217-101 in his regular-season contests, a .682 winning percentage.

The Rockets’ winning percentage this season — .611 — was the worst of his four-year tenure. He went 28-23 in the playoffs with Houston and was the NBA’s coach of the year in 2016-17, his first season with the Rockets.

“Mike has done some unbelievable things here,” Rockets star James Harden said Saturday night, making clear that he would have liked to have seen D’Antoni come back. Houston’s other star, guard Russell Westbrook, also raved about the type of person D’Antoni is and said he enjoyed his lone season playing under him.