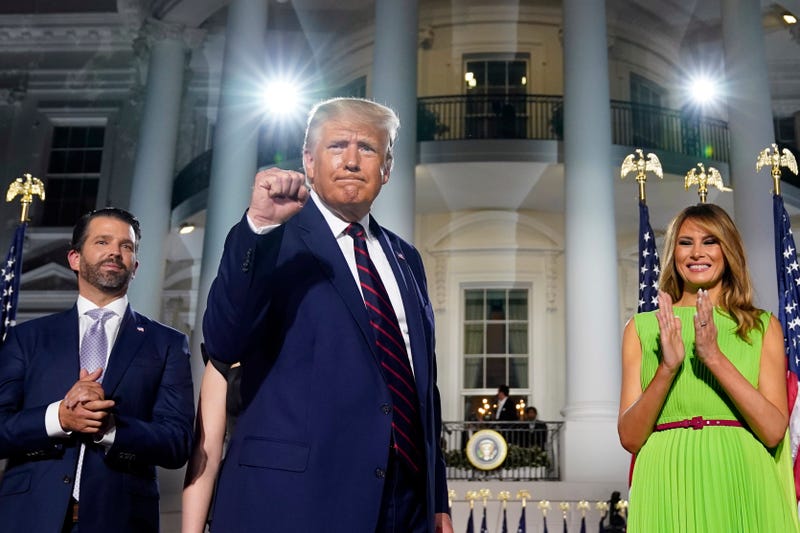 WASHINGTON (AP) — Democrats on the House Oversight Committee are seeking an investigation into what they call repeated violations of the federal Hatch Act by members of the Trump administration during last month's Republican National Convention.

The 1939 law is intended to limit political activity by federal employees in their official capacity, although it does not apply to the president and vice president.

Throughout the convention, administration officials "repeatedly used their official positions and the White House itself to bolster President (Donald) Trump’s re-election campaign,” the lawmakers wrote in a letter to the independent Office of Special Counsel. “We are alarmed that President Trump and some senior administration officials are actively undermining compliance with — and respect for — the law.”

Trump gave his acceptance speech for the GOP presidential nomination at the White House, and Acting Homeland Security Secretary Chad Wolf appeared in a video of a naturalization ceremony on White House grounds led by Trump. Secretary of State Mike Pompeo also spoke to the convention through a video link while in Israel on official travel, and numerous officials used the White House for convention speaking engagements.

"We are particularly concerned with the consequences of White House actions on career employees who may have felt pressured to help organize and put on these events, potentially subjecting them to legal jeopardy,'' the Democrats wrote Wednesday. "Career employees have faced severe consequences for behavior far less egregious than what the country witnessed last week.''

For example, a Department of Energy employee who provided a tour of a federal facility to a congressional candidate was forced to resign, and a Defense Logistics Agency employee who included the phrase “Vote Republican” in a PowerPoint presentation received a suspension of 30 days without pay.

The Office of of Special Counsel is an independent investigative and prosecutorial agency that oversees executive branch officials, including their compliance with the Hatch Act.

In addition to Trump's speech and the naturalization ceremony, a regional administrator at the Department of Housing and Urban Development interviewed New York City tenants for a video segment that was shown at the convention. Several participants later said they were not aware the interviews would be used at the convention.

The Trump White House has taken an ambivalent approach to the ethics rules and norms that guided past administrations. And Wolf and Pompeo now join a lengthy list of other Trump officials who have taken a cavalier approach specifically to the Hatch Act.

Trump has joked he would "excuse anyone found to be violating” the Hatch Act on his behalf. White House chief of staff Mark Meadows dismissed concerns about such violations, telling Politico: “Nobody outside of the Beltway really cares.”

Past secretaries of state have gone to lengths to avoid the appearance of partisan political activity, particularly during nominating conventions for the administrations they served. Pompeo’s speech shattered that precedent and even went against the guidance he issued to American diplomats, advising that federal law prevented them from overtly taking sides in the presidential campaign.

Two government watchdog groups have filed separate ethics complaints against Wolf and Pompeo over their actions during the GOP convention.