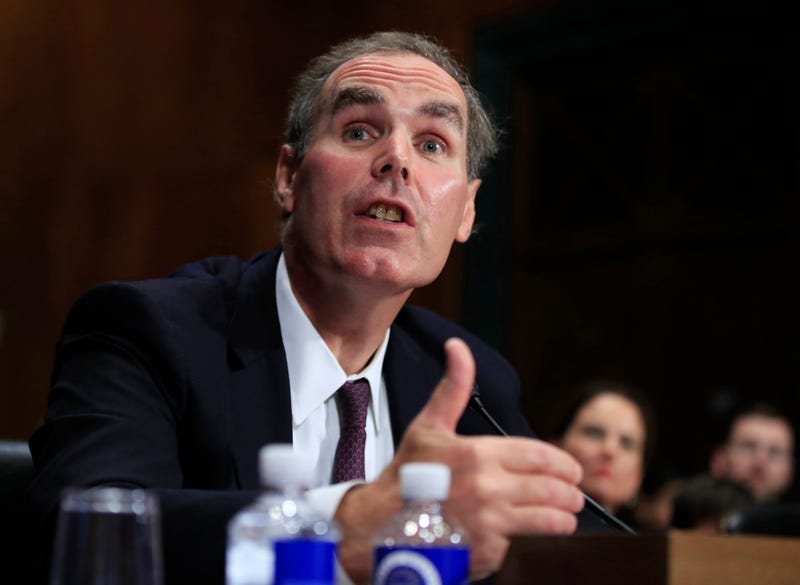 Photo credit FILE- In this Sept. 6, 2017, file photo, Eric Dreiband testifies before a Senate Judiciary Committee hearing on Capitol Hill in Washington regarding his nomination to be Assistant Attorney General, Civil Rights Division. The Justice Department is seeking data about "orders which may have resulted in the deaths of thousands of elderly nursing home residents," sending letters Wednesday, Aug. 26, 2020, to the governors of New York, New Jersey, Pennsylvania and Michigan. Dreiband said that the federal government must ensure vulnerable nursing home patients "are adequately cared for with dignity and respect and not unnecessarily put at risk." (AP Photo/Manuel Balce Ceneta, File)
By The Associated Press

NEW YORK (AP) — The Justice Department on Wednesday sent letters to the governors of New York and three other Democratic-led states, seeking data on whether they violated federal law by ordering public nursing homes to accept recovering COVID-19 patients from hospitals — actions that have been criticized for potentially fueling the spread of the virus.

Prosecutors said the fact-finding letters also sent to New Jersey, Pennsylvania and Michigan were aimed at determining whether the orders “may have resulted in the deaths of thousands of elderly nursing home residents.”

“We must ensure they are adequately cared for with dignity and respect and not unnecessarily put at risk," Assistant Attorney General for Civil Rights Division Eric Dreiband said.

New York Gov. Andrew Cuomo and Pennsylvania Gov. Tom Wolf said their offices were reviewing the request. Spokespeople for both Michigan Gov. Gretchen Whitmer and New Jersey Gov. Phil Murphy said the fact that all the states are led by Democrats and the timing of the move — in the midst of the Republican National Convention — spoke volumes about the political nature of the inquiry.

“Americans would all be better served if the Trump administration stopped the partisan games and focused on delivering a real plan to defeat COVID-19,” said Whitmer spokesperson Tiffany Brown.

The governors' actions at the height of the pandemic were designed to ensure hospitals had enough bed space for the most serious COVID cases, but were almost immediately criticized by nursing homes and relatives for potentially putting frail, elderly care home residents at risk.

Cuomo's March 25 order, for example, specifically told homes they could not refuse to accept recovering COVID-19 patients from hospitals as long as the patients were “medically stable.” The order barred homes from even testing such patients to see if they still had the virus. Some homes said they feared they would lose their licenses if they didn't comply.

Cuomo, who said he was following guidelines from the federal Centers for Disease Control and Prevention, reversed the order under pressure May 10, long after New York’s death toll in care homes had climbed to among the nation's highest.

Long-term care facilities represent less than 1% of the U.S. population, but they account for 42% of the COVID-19 deaths, with more than 70,000 fatalities reported by the COVID Tracking Project.

In its statement announcing its request for data, the Justice Department said that hospital patients were sent “often without adequate testing” to ensure they would not spread the virus to residents. It also cited federal data showing New York, with nearly 32,600 dead, leads the nation in COVID-19 deaths, and is second only to New Jersey in the number of deaths per population.

The inquiry was aimed at nursing homes that are “owned, operated or managed by, or provide services on behalf of” the states.

The Justice Department’s civil rights division said it is evaluating whether to initiate investigations under a federal law called the Civil Rights of Institutionalized Persons Act” that protects the rights of people in state-run nursing homes and other facilities.

The news was welcomed by Republican lawmakers, including U.S. Rep. Steve Scalise of Louisiana, who is pursuing a congressional inquiry into Cuomo’s handling of nursing homes. Scalise called Wednesday’s announcement “the right step toward holding Gov. Cuomo and other Democratic governors accountable for issuing deadly ‘must admit’ orders at nursing homes.”

“These orders resulted in the deaths of tens of thousands of nursing home patients,” he said. “Our nation’s seniors and their loved ones deserve better."

The Society for Post-Acute and Long-Term Care Medicine, known as AMDA, warned at the time that Cuomo's March 25 order posed a “clear and present danger.”

“Our concern was we were making decisions in a very hasty way when the hospitals were overcapacity,” Alex Bardakh, the group's director of public policy and advocacy, said Wednesday. “Decisions were being made so quickly that they weren’t considering ramifications.”