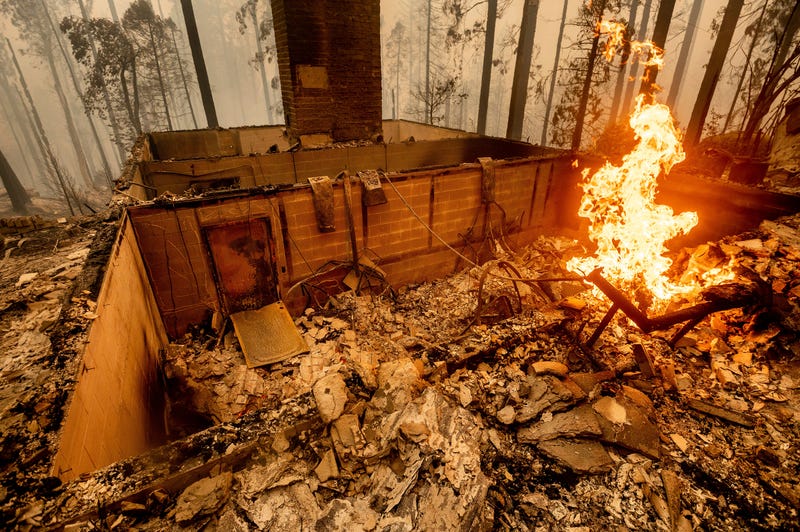 Photo credit Flames burn at a home leveled by the Creek Fire along Highway 168 on Tuesday, Sept. 8, 2020, in Fresno County, Calif. (AP Photo/Noah Berger)
By The Associated Press

SHAVER LAKE, Calif. (AP) — More than a dozen California firefighters trying to protect a fire station from flames were overrun by the blaze Tuesday, and several were hurt. Elsewhere, military helicopters rescued more than 150 people stranded in the burning wilderness.

Fourteen firefighters deployed emergency shelters as flames overtook them and destroyed the Nacimiento Station in the Los Padres National Forest on the state's central coast, the U.S. Forest Service said. They suffered from burns and smoke inhalation, and three were flown to a hospital in Fresno, where one was in critical condition.

The injuries came as wind-driven flames of more than two dozen major fires chewed through bone-dry California after a scorching Labor Day weekend that saw a dramatic airlift of more than 200.

Rescue choppers pulled another 164 people from the Sierra National Forest through the morning and were working to rescue 17 others, said Gov. Gavin Newsom, who described pilots wearing night-vision goggles to find a place to land.

“It’s where training meets the moment, but it always takes the courage, the conviction and the grit of real people doing real work,” said Newsom, who called the fires historic.

California has already set a record with nearly 2.3 million acres (930,776 hectares) burned this year, and the worst part of the wildfire season is just beginning.

The previous acreage record was set just two years ago and included the deadliest wildfire in state history, which was started by power lines and swept through the community of Paradise and killed 85 people.

That 2018 blaze forced the state's largest utility, Pacific Gas & Electric, to seek bankruptcy protection and guard against new disasters by cutting off power pre-emptively when fire conditions are exceptionally dangerous.

With high and dry winds expected until Wednesday, the utility cut power to 172,000 customers over the weekend and more outages were expected in Northern California.

More than 14,000 firefighters are battling fires around the state. Two of the three largest blazes in state history are burning in the San Francisco Bay Area.

California was not alone: Hurricane-force winds and high temperatures kicked up wildfires across parts of the Pacific Northwest over the holiday weekend, burning hundreds of thousands of acres and mostly destroying the small town of Malden in eastern Washington.

In Southern California, fires burned in Los Angeles, San Bernardino and San Diego counties, and the forecast called for the arrival of the region's notorious Santa Ana winds. The U.S. Forest Service on Monday decided to close all eight national forests in the region and to shutter campgrounds statewide.

“Existing fires are displaying extreme fire behavior. New fire starts are likely. Weather conditions are worsening, and we simply do not have enough resources to fully fight and contain every fire," said Randy Moore, a forester for the Forest Service’s Pacific Southwest region that covers California.

Lynne Tolmachoff, spokeswoman for the California Department of Forestry and Fire Protection, known as Cal Fire, said it's “unnerving" to have reached a record for acreage burned so soon. September and October usually are the worst months for fires because vegetation has dried out and high winds are more common.

While the two mammoth San Francisco Bay Area fires were largely contained after burning for three weeks, firefighters struggled to corral several other major blazes ahead of the expected winds. Evacuation orders were expanded to more mountain communities Monday as the so-called Creek Fire burned through the Sierra National Forest in Central California.

It was one of many recent major fires that displayed terrifyingly swift movement. The fire advanced 15 miles (24 kilometers) in a single day during the weekend. Since starting Friday from an unknown cause, it has burned 212 square miles (549 square kilometers). Forty-five homes and 20 other structures were confirmed destroyed so far.

Debra Rios wasn't home Monday when the order came to evacuate her hometown of Auberry, just northeast of Fresno. Sheriff's deputies went to her ranch property to pick up her 92-year-old mother, Shirley MacLean. They reunited at an evacuation center.

Mountain roads saw a steady stream of cars and trucks leaving the community of about 2,300 on Monday afternoon.

Firefighters working in steep terrain saved the tiny town of Shaver Lake from flames that roared down hillsides toward a marina. About 30 houses were destroyed in the remote hamlet of Big Creek, resident Toby Wait said.

“About half the private homes in town burned down,” he said. “Words cannot even begin to describe the devastation of this community.”

A school, church, library, historic general store and a major hydroelectric plant were spared in the community of about 200 residents, Wait told the Fresno Bee.

On Saturday, National Guard rescuers in two military helicopters airlifted 214 people to safety after flames trapped them in a wooded camping area near Mammoth Pool Reservoir. Twelve people were hospitalized, two of them with seriously injuries.

One of the Southern California fires closed mountain roads in Angeles National Forest and forced the evacuation of the historic Mount Wilson Observatory. Late Monday night, the Los Angeles County Fire Department told residents of Duarte, Bradbury and Monrovia near the forest to get ready for a possible evacuation.

Cal Fire said the so-called El Dorado Fire in San Bernardino County started Saturday morning when a smoke-generating pyrotechnic device was used by a couple to reveal their baby's gender.