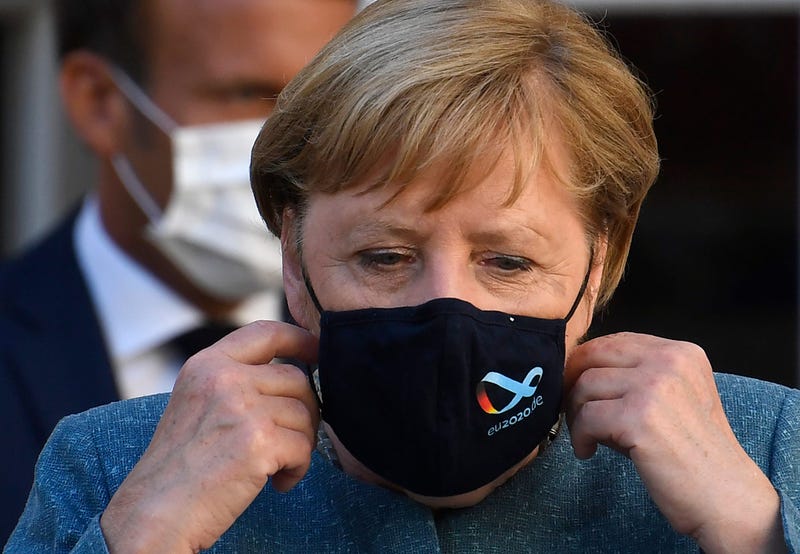 Photo credit German Chancellor Angela Merkel takes her mask off as she arrives with French President Emmanuel Macron for a press conference at the Fort de Bregancon, southern France, Thursday, Aug. 20, 2020. The leaders of Germany and France are meeting Thursday at a Mediterranean retreat for talks on how to resuscitate Europe's economy without causing a new virus crisis, and on a growing number of global hot spots. (Christophe Simon/Pool Photo via AP)
By The Associated Press

BERLIN (AP) — The German economy, Europe's biggest, shrank slightly less in the second quarter than originally estimated, the official statistics agency said Tuesday — though the 9.7% drop was still easily the worst on record.

The Federal Statistical Office revised the quarter-on-quarter contraction in gross domestic product down from the 10.1% it initially reported at the end of July.

Despite the revision, it remained by far the steepest drop in the 50 years that quarterly GDP figures have been recorded — easily beating a 4.7% decline in the first quarter of 2009, during the global financial crisis.

The German decline was one of the less drastic second-quarter contractions among Europe's major economies as wide-ranging shutdowns because of the coronavirus pandemic took their toll on economic activity during the spring. France, Italy, Spain and Britain all saw double-digit drops.