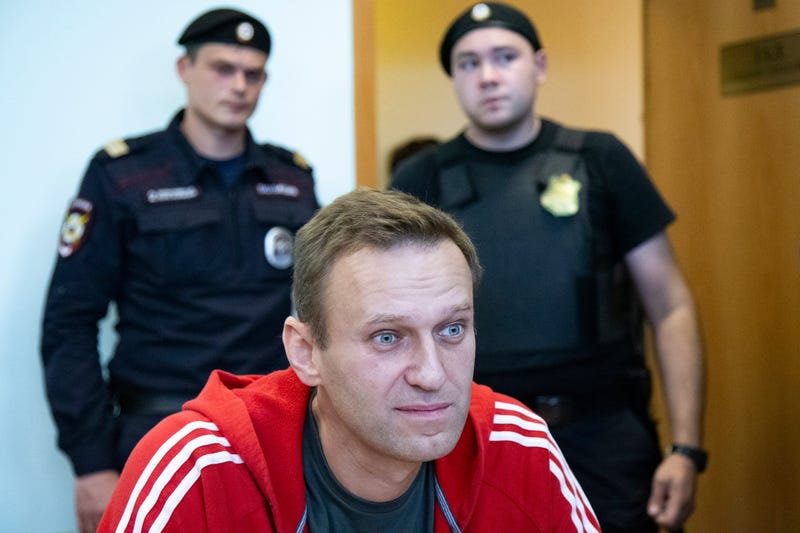 Photo credit FILE In this file photo taken on Thursday, Aug. 22, 2019, Russian opposition leader Alexei Navalny speaks to the media prior to a court session in Moscow, Russia. German Chancellor Angela Merkel says Russian opposition leader Alexei Navalny was the victim of an "attempted murder by poisoning" and the aim was to silence him. Navalny was poisoned with the same type of Soviet-era nerve agent that British authorities identified in a 2018 attack on a former Russian spy, the German government said Wednesday, Sept. 2, 2020 citing new test results. (AP Photo/Alexander Zemlianichenko, File)
By The Associated Press

The Berlin hospital treating the dissident said he remains on a ventilator though his condition is improving. It said it expects a long recovery and still can’t rule out long-term effects on his health from the poisoning.

The German government said that testing by a German military laboratory showed “proof without doubt of a chemical nerve agent from the Novichok group.” British authorities identified Novichok as the poison used on former spy Sergei Skripal and his daughter in England.

“There are very serious questions now that only the Russian government can answer, and must answer,” Merkel said.

British Prime Minister Boris Johnson also called on Russia to explain what happened, calling the use of a chemical weapon “outrageous.” In Washington, National Security Council spokesman John Ullyot tweeted that it was “completely reprehensible.”

“We will work with allies and the international community to hold those in Russia accountable, wherever the evidence leads,” Ullyot said.

The European Union also called for an investigation and its foreign affairs chief, Josep Borrell, said any use of chemical weapons was "completely unacceptable and a breach of international law.”

Navalny, a politician and corruption investigator, fell ill on a flight to Moscow on Aug. 20 and was taken to a hospital in the Siberian city of Omsk after the plane made an emergency landing.

German Foreign Minister Heiko Maas said the Russian ambassador was summoned to his ministry Wednesday after the latest findings.

Russia’s deputy U.N. ambassador, Dmitry Polyansky, dismissed the finger pointing as a knee-jerk reaction. “Today accusing #Russia is a must-do for any Western country,” he said in a tweet.

In Moscow, Russian authorities were quick to blame Germany for not sharing its findings.

Kremlin spokesman Dmitry Peskov said Russian authorities are “ready and interested in full cooperation and exchange of information” with Germany but added that Berlin still hasn’t provided any official response to formal requests from the Russian prosecutor general’s office and doctors who treated Navalny.

The German government said it would inform its partners in the European Union and NATO about the test results and would consult them on a response. Germany also will contact the Organization for the Prohibition of Chemical Weapons.

Shortly after the test results were announced, the Charite hospital said that Navalny is still in intensive care but “continues to improve.”

“Recovery is likely to be lengthy,” it said in a statement. “It is still too early to gauge the long-term effects, which may arise in relation to this severe poisoning.”

Andrea Sella, a professor of inorganic chemistry at University College London, said Navalny's prognosis is hard to predict. He said that “very swift action” is needed to stabilize patients in poisoning cases and noted the “significant delay,” given that Navalny was initially cared for by Russian doctors who said they had ruled out poisoning.

“The problem is that even if Mr Navalny were to survive there may be lingering long-term neurological issues,” Sella said.

Navalny’s allies in Russia have insisted he was deliberately poisoned by the country’s authorities, accusations that the Kremlin has rejected as “empty noise.”

“To poison Navalny with Novichok in 2020 would be exactly the same as leaving an autograph at a crime scene, like this one,” Navalny’s longtime ally and strategist Leonid Volkov said in a tweet that featured a photo of Putin's name and a signature next to it.

It would not be the first time a prominent, outspoken Russian was targeted in such a way — or the first time the Kremlin was accused of being behind it.

Navalny's allies have also accused Russian authorities of delaying his transfer out of the country after the poisoning. It took much wrangling and 48 hours to move Navalny to Berlin. Local doctors at the time said he was too unstable to be transported, and the Kremlin said it would defer to the physicians.

The Siberian medical team relented only after a charity that had organized a medevac plane revealed that German doctors who examined the politician said he was stable enough to be moved.

The reversal came as international pressure on Moscow mounted substantially.

“The system has long lost its ability to operate in an optimal way. It had to choose between the scandal related to Navalny’s (possible) death in Omsk and the risk of the poisoning being discovered by German doctors,” political analyst Abbas Gallyamov said.

Novichok is a class of military-grade nerve agents developed by the Soviet Union at the end of the Cold War. Western weapons experts believe it was only ever manufactured in Russia. After the Skripals were poisoned, Russia said the U.S., Britain and other Western countries had acquired the expertise to make the nerve agent and that the Novichok used in that attack could have come from them.

“Unless you are working for the military, it is impossible to be accidentally exposed," Richard Parsons, a senior lecturer in biochemical toxicology at King's College London, said. "It is unavailable from anywhere except the Russian military as far as I am aware.”

Britain charged two Russians — alleged to be agents of the Russian military intelligence service GRU — in absentia with the 2018 attack that left the Skripals in critical condition and killed a British woman. Russia has refused to extradite the men to the U.K.