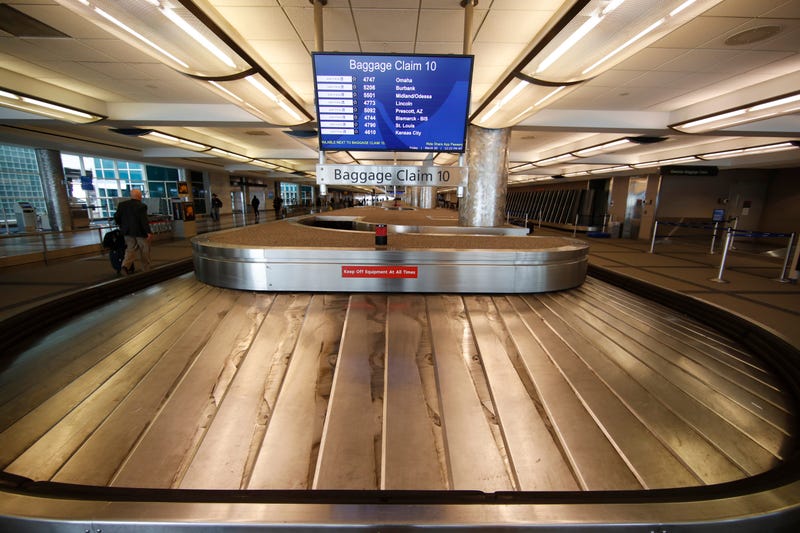 Photo credit FILE - In this March 20, 2020 file photo, an empty baggage carousel spins in Denver International Airport as travelers deal with the spread of the coronavirus in Denver. Unions are gaining support in Congress for another $32 billion in federal aid to protect airline workers from layoffs for another six months. Still, it's too early to say how the issue will turn out. (AP Photo/David Zalubowski, File)

A group of 16 Republican senators has endorsed giving more money to airlines to avoid layoffs right before the November election, giving a boost to a lobbying effort by airlines and their unions.

The GOP senators did not specify an amount, but a proposal by several airline unions would give the hard-hit aviation industry $32 billion, including $25 billion for passenger airlines.(backslash)

“Such businesses and their workers are uniquely tethered to air travel and have been and will continued to be significantly impacted by the decline in air travel" due to the coronavirus pandemic, the senators said in a letter to Senate GOP and Democratic leaders. They said Congress should also consider more help for airport concessionaires and aircraft manufacturers.

In March, companies got $32 billion to help cover payroll costs for six months in exchange for not laying off workers. The money and the ban on layoffs both end Oct. 1.

Eleven of the 16 GOP senators are up for re-election in November and could be hurt by headlines about thousands of airline workers being laid off the month before the Nov. 3 election. Some face difficult re-election races, including Susan Collins of Maine and Cory Gardner of Colorado. Others represent states with large numbers of airline workers, such as John Cornyn of Texas.

Senate Majority Leader Mitch McConnell of Kentucky made no provision for airline workers in his $1 trillion proposal for additional virus relief. A spokesman for McConnell had no comment.

A majority in the House, including more than two dozen Republicans, have endorsed the spending. The Treasury Department has so far declined to comment on the Trump administration's position.

No lawmakers have spoken out against the airline provision, although aides say some object to helping workers in one industry when there are millions of other workers who have already lost their jobs during the pandemic.

Air travel isn't expected to return to previous levels for several years — not until 2024, according to a trade group for global airlines — leading some industry observers to say airlines should be allowed to shrink to match lower demand, even if it means fewer jobs.

Sara Nelson, president of the Association of Flight Attendants, responded by calling the airline provision the most successful jobs program in the $2.2 trillion virus-relief measure approved in March. She said it maintains air service to all cities that had flights before the pandemic.