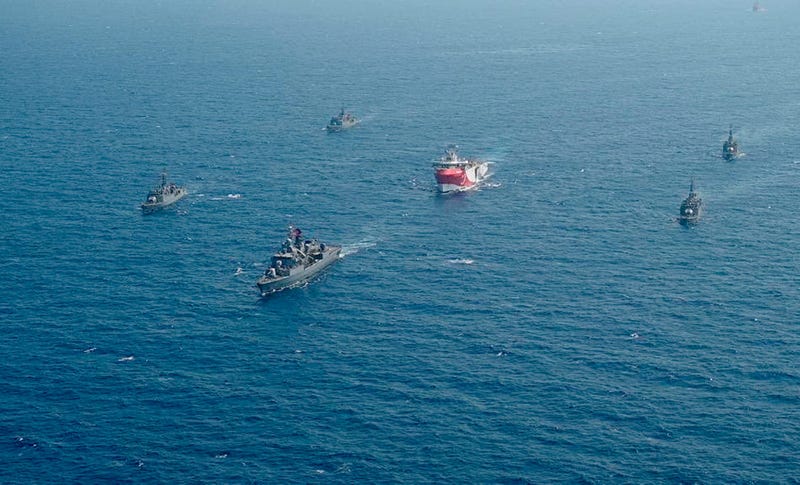 Photo credit FILE - In this photo taken Monday, Aug. 10, 2020, Turkey's research vessel, Oruc Reis, center, is surrounded by Turkish navy vessels as it was heading in the west of Antalya on the Mediterranean, Turkey. Greece says it will conduct a navy and air force exercise in an area of the eastern Mediterranean where Turkey is prospecting for oil and gas in an area as the neighboring countries remain locked in a dispute over offshore energy rights. (IHA via AP)
By The Associated Press

ATHENS, Greece (AP) — Greece's navy and air force will conduct military exercises beginning Tuesday in the eastern Mediterranean near a contested area where Turkey is prospecting for oil and gas, authorities said, drawing an angry response from Turkey.

Germany, meanwhile, is stepping up diplomatic efforts to prevent tensions between the two regional rivals from escalating further, sending its foreign minister to both Athens and Ankara on Tuesday.

The Turkish government disputes Greece’s claim to exclusive rights in the waters where Turkey's Oruc Reis research vessel is now surveying. The United States and the European Union so far have broadly backed Greece in the dispute, but EU countries remain split over a request from Greece to impose sanctions on Turkey. The tensions between the two NATO members over Mediterranean Sea rights have echoed across Europe.

The announcement is “a spoiled act that endangers the coastal and navigational safety of all ships in the region,” Erdogan said in a televised address. “As of now, Greece will be the only one responsible for any negative development in the region.”

Turkey says the Oruc Reis is supposed to keep working through Thursday. Greece has repeatedly demanded its withdrawal, sent its own warships to the area and placed its armed forces on alert.

Athens says the tensions led to a minor collision earlier this month between a Greek XXXXX and a Turkish frigate, in which nobody was injured.

Erdogan vowed Monday not to abandon the search for energy in the eastern Mediterranean.

“Turkey will not take the slightest step back concerning the operations of the Orus Reis nor (concerning) our (naval) fleet," he said. "On the contrary, Turkey will act with more determination concerning the protection of its rights, and (of) laws in the region.”

German Foreign Minister Heiko Maas will try to revive talks aimed at deescalating the tensions between the two uneasy neighbors.

“From our standpoint, direct dialogue and steps from both sides to deescalate the situation are needed to find a solution to (reduce) tensions,” German Foreign Ministry spokesman Christofer Burger told reporters in Berlin. “We have a big concern that these tensions ... could have even more grave consequences.”

Germany, which holds the EU's rotating presidency, is among EU nations considered reluctant to impose sanctions on Turkey. EU foreign ministers are expected to discuss the crisis in the eastern Mediterranean at an informal meeting in Berlin this week.