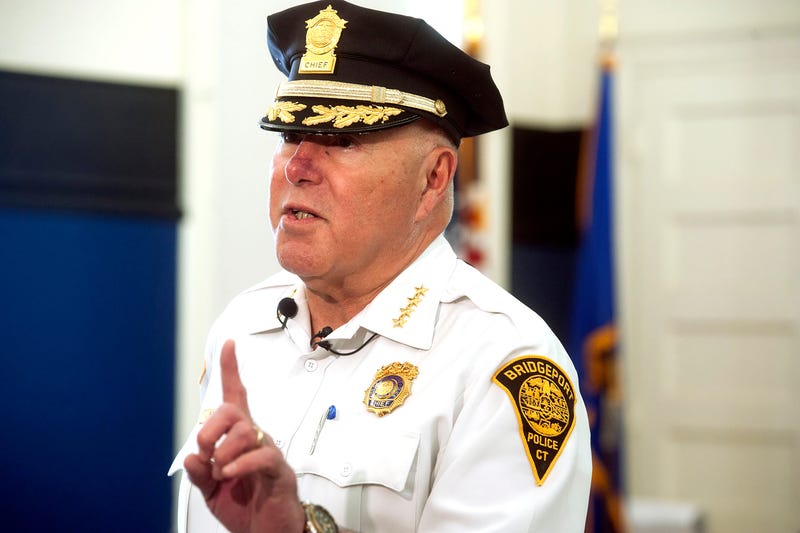 Photo credit Bridgeport Police Chief Armando "A.J." Perez speaks during an interview at the Police Training Academy on April 29, 2019, in Bridgeport, Conn. Perez, the police chief of Connecticut's largest city, was arrested Thursday, Sept. 10, 2020, on federal charges that he teamed with Bridgeport's personnel director to rig the hiring process to make sure he'd get his job. (Ned Gerard/Hearst Connecticut Media via AP)
By The Associated Press

BRIDGEPORT, Conn. (AP) — The police chief in Connecticut's largest city resigned Thursday, the mayor said, hours after being arrested on federal charges that he teamed with Bridgeport’s personnel director to rig the hiring process to ensure he got the job.

The accusations against Perez included that he was provided with confidential testing materials other candidates did not get and having testing criteria weighed in his favor.

Perez, 64, of Trumbull, and acting personnel Director David Dunn, 72, of Stratford, were each charged with wire fraud, conspiracy to commit wire fraud and with making false statements to investigators.

Both appeared via video before a federal judge in Bridgeport and were allowed to remain free on $150,000 bail. They did not enter pleas.

THIS IS A BREAKING NEWS UPDATE. AP's earlier story is below. Please check back for updates.

The police chief of Connecticut's largest city was arrested Thursday on federal charges that he teamed with Bridgeport's personnel director to rig the hiring process to make sure he would get his job.

Perez, 64, of Trumbull, Connecticut, and Dunn, 72, of Stratford, Connecticut, were each charged with wire fraud, conspiracy to commit wire fraud and with making false statements to investigators. Both appeared via videoconference before a federal judge in Bridgeport and were allowed to remain free on $150,000 bail.

A criminal complaint alleged they defrauded the city of 144,000 people by rigging the 2018 police chief examination to put Perez in position to secure the post as head of a police department with an annual budget of over $100 million and more than 400 officers.

The previous police chief had resigned in March 2016.

Acting U.S. Attorney Audrey Strauss in New York City said the men corrupted what was supposed to be an impartial and objective search for a permanent police chief “and then repeatedly lied to federal agents in order to conceal their conduct.”

Dunn also instructed officials there should be no requirement that the chief candidates have bachelor’s degrees, and Perez was the only applicant without one, authorities said.

It said the maneuvers were designed to ensure Perez, who has been with the police department nearly four decades, was ranked among the top three candidates and could thus qualify to be awarded a five-year contract as chief.

The terms of his contract included a $300,000 payout for accrued leave, the complaint said.

Perez and Dunn both were voluntarily interviewed during the FBI's investigation, but they lied to agents to conceal what they did to corrupt the examination process, the complaint said.

Mayor Joe Ganim's office released a statement saying city officials are reviewing the allegations and deciding whether to make any personnel changes in response. The statement did not directly respond to the accusations.

“These allegations are extremely troubling and, unfortunately, the latest in a string of incidents that have undermined public confidence in the leadership of our police department,” said state Reps. Andre Baker Jr., Antonio Felipe, Jack Hennessy, Christopher Rosario, Steve Stafstrom, and Charlie Stallworth.

Ganim, a close friend of Perez's, served nearly seven years in prison himself after he was convicted of corruption for steering city contracts in exchange for private gifts during his first tenure of Bridgeport mayor, which ran from 1991 until his resignation in 2003.

He was released from prison in 2010 and elected mayor again in 2015, after apologizing and asking residents for a second chance.