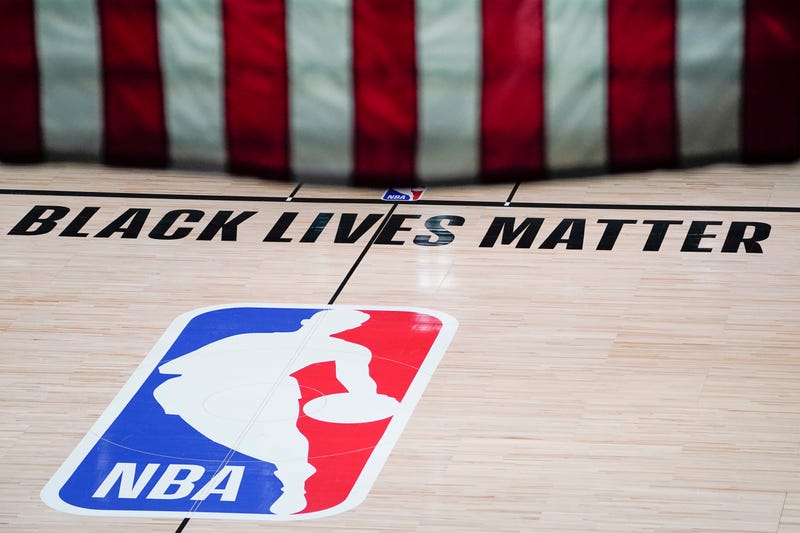 Photo credit Black Lives Matter is displayed near the NBA logo in an empty basketball arena Friday, Aug. 28, 2020, in Lake Buena Vista, Fla. The NBA playoffs will resume Saturday after the league and the National Basketball Players Association detailed the commitments that made players comfortable continuing the postseason. In a joint statement released Friday, the sides say they will immediately establish a social justice coalition, made up of players, coaches and owners, that would focus on issues such as voting access and advocating for meaningful police and criminal justice reform. (AP Photo/Ashley Landis, Pool)
By The Associated Press

And they want to keep playing basketball.

Teams returned to the court Friday after the NBA and the National Basketball Players Association agreed on commitments that made players comfortable continuing.

An emotional Chris Paul, the union president, detailed the events of the previous two days, when players upset by the latest police shooting of a Black man left them considering leaving the Disney campus and going home.

“We’re all hurt, we’re all tired of just seeing the same thing over and over again and everybody just expects us to be OK just because we get paid great money,” Paul said. “We’re human, we have real feelings and I’m glad that we got a chance to get in a room and talk with one another and not just cross paths and say good luck in your game today.”

All 13 teams remaining in the postseason scheduled practice Friday — the anniversary of the 1963 March on Washington for Jobs and Freedom, as Paul noted — though some declined to speak with reporters. Games are to resume Saturday with the Milwaukee Bucks taking on the Orlando Magic. The other two games Saturday will be Oklahoma City Thunder versus the Houston Rockets followed by the Portland Trail Blazers against the Los Angeles Lakers.

Play stopped Wednesday when the Bucks didn’t take the court for their playoff game against Orlando, showing their frustration with the police shooting of Jacob Blake in Wisconsin and acts of racial injustice.

Games were postponed the last two days, during which players met among themselves and with coaches and owners before an agreement to resume was reached.

“The key to this thing is that I think we all needed to take a breath," Clippers coach Doc Rivers said. "We needed a moment to breathe. It’s not lost on me that George Floyd didn’t get that moment. But we did and we took it. And the players took it, and they got to refocus on the things that they wanted to focus on outside of their jobs.”

High on that list is voting, mentioned frequently in a joint statement by the league and the NBPA.

Many within the league of primarily Black players have focused on the importance of voting, and the need for places in inner cities where minorities can do so safely. With no NBA games to play be played in November, arenas are an ideal place for it.

Atlanta, Detroit, Charlotte and Sacramento were already on board. Houston's Toyota Center was locked in this week, Madison Square Garden and the arenas for the Clippers, Dallas and Utah were added Friday and Rivers said Miami is working hard to make its facility available.

All team owners who also control their arena property will work with local officials to turn their buildings into a voting location for the 2020 general election to allow for safe, in-person voting.

Paul pointed out that practice facilities would be helpful if arenas can't be secured.

The players and the league will also immediately establish a social justice coalition, made up of players, coaches and owners, that will focus on issues such as voting access and advocating for meaningful police and criminal justice reform.

And the NBA and players will work with TV networks to create advertising spots during the remainder of the postseason to promote greater engagement in the election process and their communities.

Paul said he'd never seen anything like the events of the previous days during his 15 years in the league. He also spoke with Blake's father.

Not continuing the playoffs would have been another crushing blow during an already damaging season financially for the NBA and its players.

With lost revenue from China after TV partners stopped televising games when Houston general manager Daryl Morey tweeted support of democratic protesters in Hong Kong, and no fans in arenas since March because of the coronavirus pandemic, the league was already headed for losses of hundreds of millions of dollars.

Players had other reasons for wanting to stay.