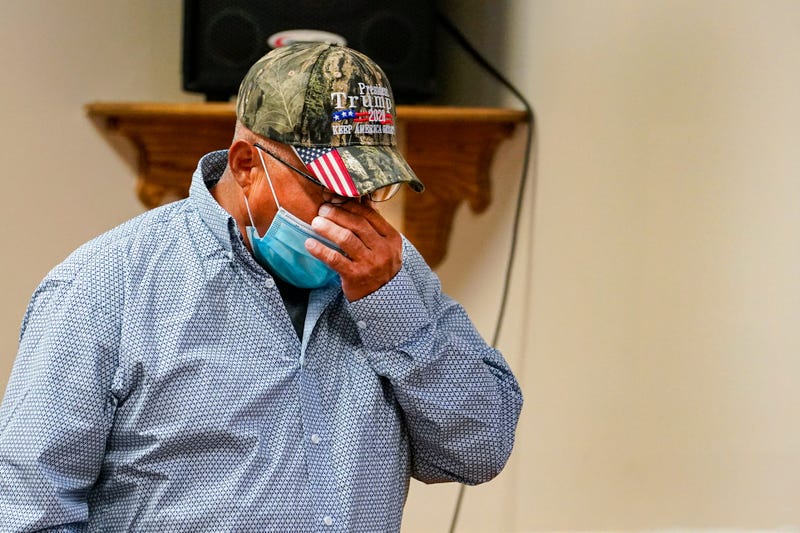 Photo credit Daniel Lee, father of Tiffany Lee, wipes his face as he leaves the podium after a statement by his attorney at the federal prison complex in Terre Haute, Ind., Wednesday, Aug. 26, 2020. Lezmond Mitchell, the only Native American on federal death row, was executed at 6:29 p.m. for the slaying of Lee's 9-year-old daughter Tiffany and her grandmother nearly two decades ago. (AP Photo/Michael Conroy)
By The Associated Press

TERRE HAUTE, Ind. (AP) — The only Native American on federal death row was put to death Wednesday, despite objections from many Navajo leaders who had urged President Donald Trump to halt the execution on the grounds it would violate tribal culture and sovereignty.

With the execution of Lezmond Mitchell for the grisly slayings of a 9-year-old and her grandmother, the federal government under the pro-death penalty president has now carried out more executions in 2020 than it had in the previous 56 years combined.

Asked by a prison official if he had any last words for victims' family members and other witnesses behind glass at the death chamber, Mitchell casually responded, “No, I’m good.”

Mitchell lay flat on his back, his glasses still on and a medical mask across his face as the lethal drug flowed to IVs in his hands and forearms. His chest heaved and his thumb tapped the gurney, as his breathing appeared more labored and his stomach area began to throb. About 10 minutes later, Mitchell no longer appeared to move and his partially tattooed hands turned pale.

An official with a stethoscope checked for a pulse and listened to Mitchell's hear before he was declared dead at 6:29 p.m. EDT.

Mitchell, 38, and an accomplice were convicted of killing Tiffany Lee and 63-year-old Alyce Slim after the grandmother offered them a lift as they hitchhiked on the Navajo Nation in 2001. They stabbed Slim 33 times, slit Tiffany’s throat and stoned her to death. They later mutilated both bodies.

A bid by tribal leaders to persuade Trump to commute Mitchell’s sentence to life in prison failed, as did last-minute appeals by his lawyers for a stay. The first three federal executions in 17 years went ahead in July after similar legal maneuvers failed. Keith Nelson, who was also convicted of killing a child, is slated to die Friday.

“Nearly 19 years after Lezmond Mitchell brutally ended the lives of two people, destroying the lives of many others, justice finally has been served,” Justice Department spokesperson Kerri Kupec said in a statement.

Critics accuse the Trump administration of pushing to resume executions after a nearly 20-year hiatus in a quest to claim the mantle of law-and-order candidate. Mitchell’s execution occurred during the GOP’s convention week.

In a statement, Mitchell's lawyers said the execution “added another chapter to its long history of injustices against Native American people.”

“Mr. Mitchell’s execution represents a gross insult to the sovereignty of the Navajo Nation, whose leaders had personally called on the President to commute his sentence to life without possibility of release,” his lawyers, Jonathan Aminoff and Celeste Bacchi, said in a statement. “The very fact that he faced execution despite the tribe’s opposition to a death sentence for him reflected the government’s disdain for tribal sovereignty.”

Lawyers for Nelson, who is slated to die Friday, argue the drug used in the executions, pentobarbital, can cause severe pain and should be deemed unconstitutional.

Death-penalty advocates say the Trump administration’s restart of executions is bringing justice — too long delayed — to victims and families. There are currently 58 men and one woman on federal death row, many of whose executions have been pending for over 20 years.

Donel Lee, Tiffany Lee's, older brother, thanked Trump for not stopping the execution and criticized the opposition by the Navajo Nation president.

“He will have to answer to God why he wanted this murderer to live,” Donel Lee said. "But now I’m at peace with it and justice is served. Now he (Mitchell) has to answer to God, and I hope my little sister was standing there with God while he judged him.”

Tiffany Lee's father, Daniel Lee, has told The Associated Press, he believes in the principle of “an eye for an eye” and wanted Mitchell to die for the slayings. He also said Navajo leaders don’t speak for him: “I speak for myself and for my daughter."

Family and friends described Slim, a school bus driver who was approaching retirement, as gracious, spiritual and well-liked by students on her route.

Michael Slim, the grandson and cousin of the victims, has sat on both sides of the courtroom during Mitchell’s court cases. An outlier in his family, he supported putting Mitchell to death but gradually changed his mind over the years and said that should be left up to God.

“We are all guilty of sin, so it’s not fair for us to condemn someone,” he said. “It’s not my job to say ‘we should kill him.’”

Mitchell has long maintained that his accomplice, Johnny Orsinger, took the lead in the killings. Orsinger was a juvenile then and couldn’t be sentenced to death. He’s serving a life sentence in Atlanta.

Mitchell, through his attorneys, said he wanted to participate in a traditional way of resolving disputes known as peacemaking that's meant to restore harmony and balance. But he was not allowed to contact victims' families under a court order.

Auska Mitchell, Mitchell’s uncle on his maternal side, said he had been praying and burning cedar earlier Wednesday and was heartbroken to hear his nephew died.

“I hope he gets the peace in death that he didn’t get in life,” he said. “It can’t be peaceful being on death row and probably solitary all the time. That’s no life to live”

Among several anti-death penalty protesters at an intersection across the street from the prison was Sister Barbara Battista, who is serving a spiritual adviser to Nelson as he awaits execution.

Nelson and Mitchell were friends, having been on death row together for nearly two decades, she said. Both men and other death row inmates haven't been holding out much hope that their lives will be spared, Battista added.

“They are all pretty resigned,” she said.

Prior to this year, the federal government had carried out just three executions since 1963, all of them between 2001 and 2003, according to the Washington, D.C.-based Death Penalty Information Center. Oklahoma City bomber Timothy McVeigh was among them.

The first of the resumed executions was of former white supremacist Daniel Lewis Lee on July 14. Two others, Wesley Purkey and Dustin Honken, were executed later the same week. The victims of all three also included children.