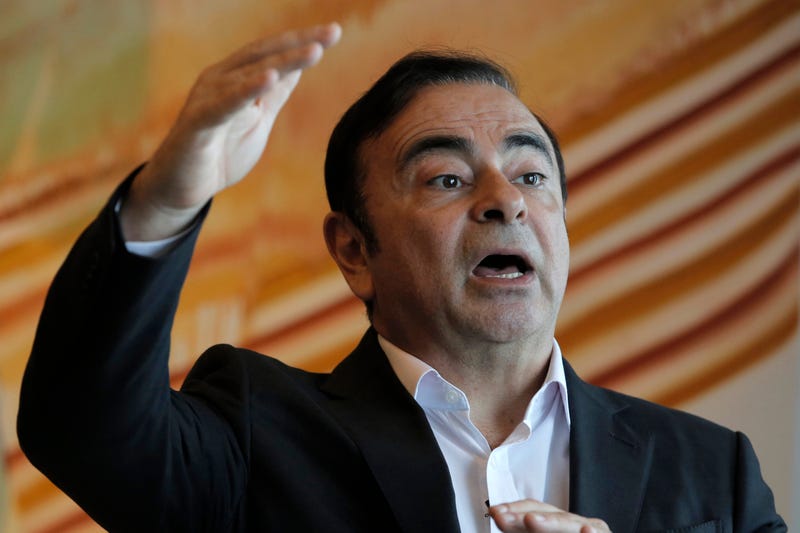 Photo credit FILE - In this Friday, April 20, 2018, file photo, Nissan Chairman Carlos Ghosn speaks during an interview in Hong Kong. The criminal trial against Japanese automaker Nissan and its former executive Greg Kelly will open in Tokyo District Court on Sept. 15. It’s the latest chapter in the unfolding scandal of Carlos Ghosn, a superstar at Nissan Motor Co. until he and Kelly were arrested in late 2018. (AP Photo/Kin Cheung, File)
By The Associated Press

TOKYO (AP) — The criminal trial against Japanese automaker Nissan and its former executive Greg Kelly will open in Tokyo District Court on Tuesday. It’s the latest chapter in the unfolding scandal of Carlos Ghosn, a superstar at Nissan Motor Co. until he and Kelly were arrested in late 2018.

Five questions and answers about the trial:

Q: WHAT ARE THE ALLEGATIONS?

A: The charges center around Kelly’s role in alleged under-reporting of Ghosn’s future compensation by about 9 billion yen ($85 million), a violation of financial laws. Kelly says he is innocent. Nissan, which is also similarly charged, has already acknowledged guilt, made corrections to the compensation documents submitted to the authorities, and has started paying a 2.4 billion yen ($22.6 million) fine.

Q: WHAT HAPPENS TO GHOSN?

A: Probably nothing. He skipped bail late last year and is now in Lebanon, which has no extradition treaty with Japan. Two Americans, Michael Taylor and his son Peter Taylor are being held in Massachusetts without bail, suspected of having helped Ghosn escape by hiding in a box on a private jet. A U.S. judge recently approved their extradition to Japan. The case is now before the U.S. State Department.

Q: HOW DO CRIMINAL TRIALS PROCEED IN JAPAN?

A: The trial, before a panel of three judges, is expected to take about a year. There is no jury. Juries are selected only for extremely serious cases in Japan, such as murder. In principle, there are no plea bargains although backroom deals are made all the time. Closed pre-trial sessions are held ahead of the trial’s opening, often for months before the real trial begins. Japan's legal system has come under fire from both within and outside the country as “hostage justice” because suspects often are held for months and interrogated without a lawyer present, often leading to false confessions, according to critics.

Q: WHAT ARE KELLY’S CHANCES?

A: More than 99% of criminal trials in Japan result in a conviction. Japanese Justice Minister Masako Mori, in an online presentation in English hosted by the Japanese Embassy in the U.S., argued the conviction rate is so high because Japan prosecutes only about a third of the cases that come up, choosing only those that “result in guilty verdicts.” She insisted there is a “presumption of innocence.” She declined comment on Kelly’s case. Jamie Wareham, Kelly’s lawyer in the U.S., is confident Kelly will be acquitted because he is “obviously innocent,” but says he has been treated unfairly, awaiting trial for nearly two years.

Q: WHAT HAPPENS NEXT?

A: Prosecutors will present their opening statement, outlining their case against Kelly during the first day of the trial. Republican lawmakers Sen. Roger Wicker from Mississippi, Sen. Lamar Alexander and Sen. Marsha Blackburn from Tennessee have spoken out in support of Kelly. When asked about the trial, Tokyo Deputy Chief Prosecutor Hiroshi Yamamoto said little beyond reiterating his confidence there was plenty of evidence to win a conviction. The maximum penalty for the charges Kelly faces is up to a decade in prison.