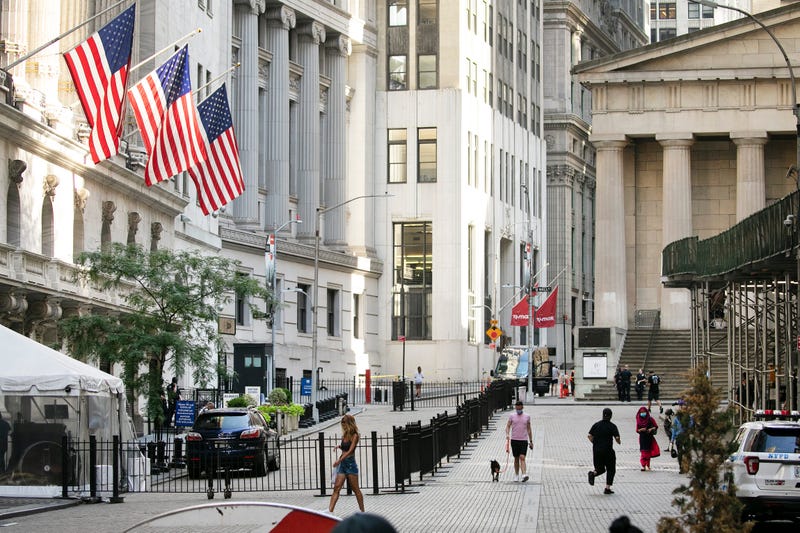 Photo credit FILE - People walk by the New York Stock Exchange, left, Tuesday, July 21, 2020. Stocks are drifting again on Wall Street Friday, Aug. 21, following a mixed set of data on the economy, as a record-breaking but wishy-washy week of trading closes out. (AP Photo/Mark Lennihan)
By The Associated Press

NEW YORK (AP) — More gains for tech stocks propped up an otherwise wobbly Wall Street on Friday, as a record-breaking but wishy-washy week of trading came to a close. The S&P 500 rose 0.3%, even though most stocks in the index were weaker after a couple reports on the U.S. economy showed more strength than economists expected. That followed up on losses across Europe after more discouraging reports there indicated a slowdown in its economy. Friday’s moves are the latest in a muted week, one where the S&P 500 returned to a record but only climbed 0.7%.

More gains for tech stocks are helping prop up an otherwise wobbly Wall Street on Friday, as a record-breaking but wishy-washy week of trading comes to a close.

The S&P 500 was up 0.3% in afternoon trading, even though most stocks in the index were weaker, after a couple reports on the U.S. economy showed more strength than economists expected. It followed up on losses across Europe after more discouraging reports there indicated a slowdown in its economies.

The S&P 500 returned to a record high this week, wiping out the last of its historic losses from the coronavirus pandemic, but the market's moves have nevertheless been very muted. The index is on pace for a 0.7% gain for the week, as momentum has slowed recently after roaring back from its nearly 34% plunge from late February into March. At 3,396.72, it's a touch above its record closing level of 3,389.78 set on Tuesday.

Investors are still waiting for more clarity on several fronts, which could drive the next big move up or down.

The economy has shown some signs of stalling recently, with Friday’s reports from Europe the latest reminder that a steady rise in coronavirus cases may be undermining growth. They follow a U.S. report from Thursday that showed that the number of workers applying for unemployment benefits picked up last week.

But the picture remains mixed. A separate report from IHS Markit on Friday said preliminary data suggests output from the U.S. private sector is at an 18-month high. Sales of previously occupied homes were also stronger in July than economists expected, as activity exploded in every region of the country.

Those reports helped the U.S. stock market recover from declines earlier in the morning.

“The housing market is strong,” said Quincy Krosby, chief market strategist at Prudential Financial. "This week has been about housing. Each one of these reports has been strong.”

Stocks of homebuilders rallied following the data, including a 2.9% rise for Lennar. But it was additional gains for tech stocks that were the biggest factor — again — keeping the market steady.

Most stocks were falling on Wall Street, and the smaller companies in the Russell 2000 small-cap index were down 0.9%. Even within the S&P 500 index of big companies, nearly three out of five stocks were lower, with energy producers and financial stocks dropping. But a 1.1% rise for tech stocks in the S&P 500 helped offset that.

Tech has remained remarkably resilient through the pandemic and continued to churn out big profits as work-from-home and other tech-friendly trends accelerate. Apple, which this week became the first U.S. company to have a market value of more than $2 trillion, rose 4.6%.

Big tech stocks, which generally have strong balance sheets and continue to deliver strong growth, will likely continue to be attractive to investors as long as there are questions about economic growth, said Krosby.

“One of the most important factors in this market and for the broadening of the market in order to include those names that have not participated is: You want to see the unemployment landscape heal, and you want to see those initial unemployment claims come down,” she said. "That’s a major focus for analysts because we’re a consumer-led economy. People need jobs in order to consume.”

Deere was another big winner after it reported profit for the latest quarter that was double what Wall Street expected. Its shares rose 5.4%.

The Federal Reserve is continuing to prop up markets and the economy by keeping interest rates at nearly zero and buying reams of bonds. But stimulus from Congress has lapsed, and Democrats and Republicans on Capitol Hill continue to haggle.

Investors say the economy and markets need another round of big support from Congress for the recovery to continue.

“Ultimately, it will take some combination of bad data, bad markets and good politics to break the impasse,” economist Ethan Harris wrote in a BofA Global Research report. “Meanwhile, every passing week without meaningful legislation lengthens the mini-recession. This is not the kind of August break this economy needs.”

Beyond Capitol Hill, investors are also waiting for the latest developments in the rising tensions between the world's two largest economies.

China’s Commerce Ministry on Thursday said that Chinese and U.S. trade envoys will hold a meeting by phone “in the near future” to discuss an agreement aimed at resolving their tariff war. No details on timing were given.