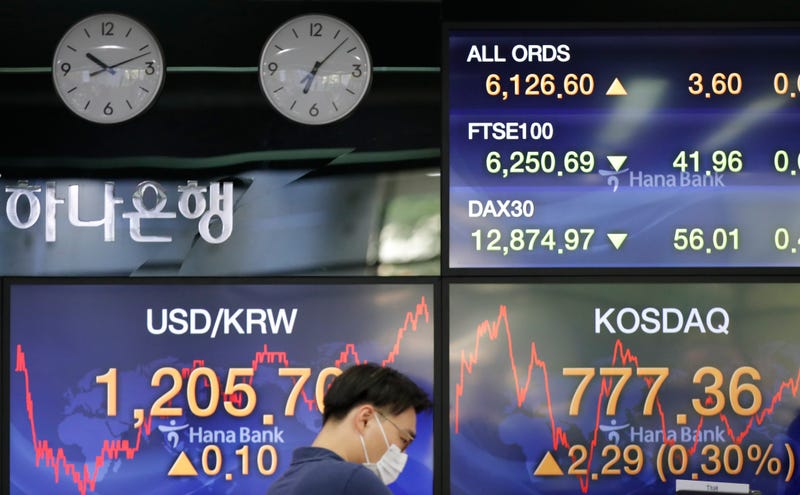 NEW YORK (AP) — Wall Street ended another wobbly day broadly higher, giving the S&P 500 its third straight weekly gain. The benchmark index rose 0.3% after flipping between small gains and losses earlier. The Dow Jones Industrial Average fell slightly and the Nasdaq rose. Trading was muted across markets, with stocks overseas, oil and gold making relatively modest moves. Slightly more stocks rose in the S&P 500 than fell, including BlackRock and other several other companies that reported better-than-expected earnings. Netflix slumped to the biggest loss in the S&P 500 after its forecast for subscriber growth fell short of analysts’ expectations.

Wall Street is drifting higher on Friday, and the S&P 500 is closing in on a third straight weekly gain.

The benchmark index was up 0.4% in afternoon trading after earlier flipping between small gains and losses. The Dow Jones Industrial Average was down 35 points, or 0.2%, at 26,698, as of 3 p.m. Eastern time, and the Nasdaq composite was up 0.5%.

Trading was muted across markets, with stocks overseas, oil and gold making relatively modest moves. Even China's market held steady: Stocks in Shanghai inched up 0.1% following a run earlier this month where their average daily move was more than 2%.

Friday's meandering trading came as reports showed a weakening in U.S. consumer sentiment but a strengthening in home building activity. They're the latest in a stream of reports that have shown how uncertain the path is for the economy, as a continuing rise in coronavirus counts threatens to undo improvements that seemed to have taken root in the economy.

“The market just continues to try and get its finger on the pulse,” said James McCann, senior global economist at Aberdeen Standard Investments.

“The renewed spread of the virus and degree of community infection means the pace of recovery we’ve had is just not going to be able to hold up anymore,” he said. “A fairly decent chunk of U.S. activity is at risk.”

Amid all the uncertainty, though, roughly three in five stocks rose within the S&P 500.

BlackRock rose 3.7% for one of the larger gains in the S&P 500 after the investment firm reported a stronger profit for the spring than analysts expected. J.B. Hunt Transport Services also reported a bigger profit than Wall Street forecast, and it rose 3.4%.

On the losing end was Netflix, which fell 6.7% for the largest loss in the S&P 500. Its forecast for new subscribers during the summer fell short of Wall Street’s own expectations, even though it reported stronger earnings for the spring than analysts expected. It’s a relatively rare step down for Netflix, which is still up roughly 50% for 2020 so far.

This week has seen some weakness for big tech-oriented stocks generally, after they had glided through most of the pandemic. Investors have continued to add to bets that Apple, Microsoft and other giants can keep growing almost regardless of the economy. The big run has critics saying they’ve become too expensive, even after accounting for the huge profits that they produce.

Microsoft slipped another 0.5% Friday, while Apple dipped 0.1%. The declines helped bring the loss for S&P 500 tech stocks for this week to 1.1%.

The overall S&P 500 index is on track for a 1.2% rise for the week, though that would be the mildest in a three-week winning stretch. It’s rallied back within roughly 5% of its record set in February and is back to where it was in early June.

Pushing stocks up recently have been improvements in hiring, retail sales and other parts of the economy, along with rising hopes for a COVID-19 vaccine. Underlying it all is massive aid for the economy and the promise of nearly zero interest rates from the Federal Reserve.

But pulling stocks down at the same time has been the relentless rise of coronavirus counts across much of the country. California has already ordered bars and other businesses to close down again amid a spike in infections, and the worry is that wider shutdowns of the economy may be inevitable.

All the conflicting signals have had the stock market cycling up and down in recent weeks, a pause following the S&P 500's nearly 34% sell-off in late February and March that gave way to a ferocious leap higher through April and May.

“If we get to the point of a vaccine, which doesn’t appear likely in the near term, that does seem to indicate there’s a lot of value in the hardest-hit elements of the market -- travel, retail, things like that," said Rob Haworth, senior investment strategist at U.S. Bank Wealth Management.

“In the meantime, investors are stuck or beholden to the work-from-home trade,” favoring companies like Amazon that would be likely to thrive even during extended lockdown perdiods, Haworth said.

The yield on the 10-year Treasury ticked up to 0.62% from 0.61% late Thursday. It tends to move with investors' expectations for the economy and inflation.