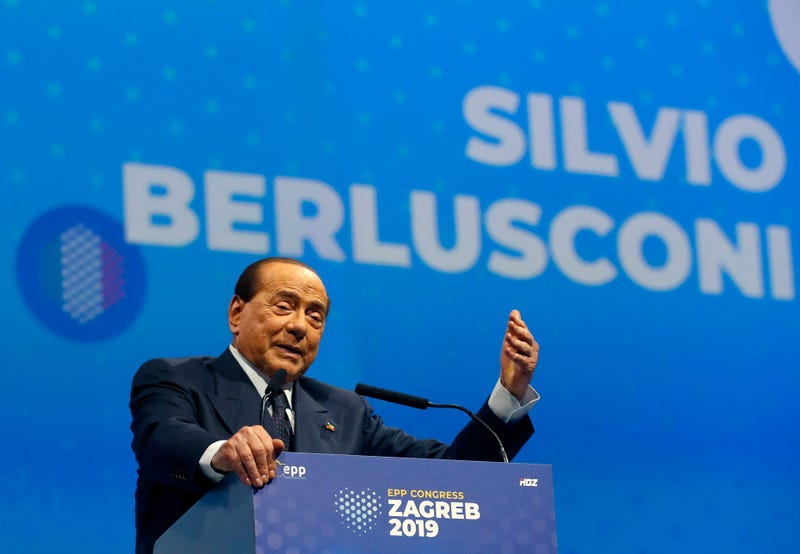 Photo credit FILE - In this Nov. 21, 2019 file photo, Silvio Berlusconi, Italian former Premier and President of Forza Italia (Go Italy) party speaks during the European Peoples Party (EPP) congress in Zagreb, Croatia. Sen. Lucia Ronzulli, who is a top aide to Silvio Berlusconi told RAI state TV Friday, Sept. 4, 2020, that the former premier was admitted to a Milan hospital early Friday as a precaution to monitor his coronavirus infection after testing positive for COVID-19 earlier in the week. (AP Photo/Darko Vojinovic, file)
By The Associated Press

ROME — Ex-Premier Silvio Berlusconi, hospitalized with COVID-19 and pneumonia, has told his supporters he’s fighting to recover from this “hellish illness.”

The 83-year-old Berlusconi phoned into a Forza Italia forum late Tuesday and spoke in a clear voice. On Wednesday, his personal doctor Alberto Zangrillo said Berlusconi’s progress was “favorable” and all his clinical parameters were “very comforting.”

Berlusconi tested positive for coronavirus on Sept. 2 and was hospitalized two days later in Milan. Zangrillo has said he is responding well to treatment but has noted that Berlusconi’s age and condition — he has a pacemaker — make him at risk for complications.

During the brief call-in, Berlusconi urged supporters to vote in upcoming regional elections and promised he was “fighting to leave behind this infernal illness.” He said: “I hope to make it and return in person to fight our battles.”

On Wednesday, Italy recorded another 1,434 new infections and 14 deaths to bring the official death toll in the onetime European epicenter of the pandemic to 35,577.

— Dr. Fauci sticks with projection of vaccine in 2021

— Pope Francis calls health of all a ‘common good’

— COVID-19 vaccine latest flashpoint in White House campaign. Trump repeatedly says a vaccine could be available before the election.

— The British government tries to tighten its grip on the coronavirus in England, banning gatherings of more than six people and l aunching a new public information campaign.

— As Indonesia cases soar, medical workers bear the burden, leading to concerns about the long-term impact on the nation’s fragile healthcare system.

WASHINGTON — Dr. Anthony Fauci says he’s sticking with his projection that a safe and effective coronavirus vaccine may be ready in early 2021. He says it’s possible it could be sooner, but “unlikely.”

The White House adviser on the coronavirus told “CBS This Morning “the more likely scenario is that we will know by the end of this calendar year and hopefully we’ll be able to start vaccinations in earnest as we begin early 2021.”

Fauci says it’s routine for late-stage vaccine studies to be put on hold because of side effects. A study by AstraZeneca of a potential coronavirus vaccine was recently paused for safety reasons after an illness from a shot in a recipient in Britain.

He says it’s “really one of the safety valves that you have on clinical trials such as this.”

The United States leads the world in coronavirus cases with 6.3 million and nearly 190,000 deaths.

PARIS — South Korea’s ambassador says his country managed to enforce a quick response to the coronavirus based on its previous experiences of major epidemics.

Ambassador Choi Jong-moon appeared Wednesday before a Senate commission of inquiry into how French authorities handled the COVID-19 pandemic. He detailed South Korea’s actions to fight the spread of the virus, including quickly ratcheting up testing and smart phone tracking apps.

French President Emmanuel Macron’s government has been under criticism over the lack of testing capacity and medical equipment.

South Korea, with a population of more than 50 million, has a total of 21,588 confirmed virus cases and 344 deaths Wednesday. France, a nation of 67 million, has reported more than 373,300 confirmed cases and 30,770 deaths, according to a tally by Johns Hopkins University.

BERLIN — Germany’s worldwide travel warning for about 160 countries will be replaced by a more differentiated system in October.

The new system will introduce individual country-by-country assessments of the coronavirus situation, the German foreign ministry said Wednesday. Such assessments are already in place for most European countries and can change quickly according to the severity or dynamic of the pandemic.

Most countries will probably still be considered coronavirus risk zones for the time being, the foreign ministry said.

“If anything, the pandemic seems to be expanding right now,” says foreign Minister Maria Adebahr.

In March, Germany had put in place a travel warning for 200 countries. In June, Germany lifted that warning for most European countries to start the summer travel season.

Since then, parts of Croatia, Spain and France have been flagged as risk zones because of the fast re-occurrence of the virus.

The figures bring the total number of recorded infections to 75,981 and 393 confirmed deaths. This come as students return to schools for in-person instruction and tourists trickle back to the skyscraper-studded city of Dubai.

The UAE has pushed an aggressive testing campaign, with 85,917 virus tests conducted in the past day.

The country’s climbing infections have raised concerns that authorities could reinstate lockdowns in parts of the country that rely heavily on tourism.

VATICAN CITY — Pope Francis has arrived at his weekly general audience wearing a face mask and used hand sanitizer before appealing for the faithful to look out for the health of others as well as themselves during the coronavirus pandemic.

Francis took off the mask as his car pulled into the San Damaso courtyard inside the Apostolic Palace, where last week he resumed his weekly Wednesday public audiences after a nearly six-month COVID-19 shutdown. While chairs were spaced out in the courtyard, the limited crowd massed along the barriers as Francis passed by and some lowered their masks to call out to him.

During his remarks, Francis lamented that “partisan interests” were emerging in which some nations and groups are seeking to keep vaccines for themselves, or to further their political or economic interests.

He said: “The coronavirus is showing us that each person’s true good is a common good and, vice versa, the common good is a true good for the person. Health, in addition to being an individual good, is also a public good. A healthy society is one that takes care of everyone’s health.”

LONDON — British Health Secretary Matt Hancock says new limits on social gatherings in England to six people are set to stay in place for the “foreseeable future,” potentially until or even through Christmas.

Hancock said the new limit for both indoor and outdoor gatherings, which will come into force and be enforceable by law from Monday, will provide “more clarity” to people and should help keep a lid on a recent spike in coronavirus cases.

Scientists say a clear message is crucial in containing pandemic.

Though there are exemptions, such as for schools, workplaces and “life events” like funerals and weddings, the government is clearly hoping that the new limits will be easily understood and followed. Unlike the previous set of guidlines, people could be fined for not following the rules — 100 pounds ($130) for a first offense, up to a potential 3,200 pounds.

PRAGUE — The Czech Republic has been facing a steep rise of new coronavirus cases with the number of people tested positive in one day surpassing 1,000 for the first time.

The day-to-day increase in the country reached a record of 1,164 on Tuesday, the Health Ministry said.

The previous record was less than 800 on Friday.

The spike has come a week after the start of the new school year with dozens of schools partially or completely closed due to pandemic.

Starting on Wednesday, it is mandatory again to wear face masks in stores and shopping malls. Bars, restaurants and night clubs have to be closed from midnight till 6 a.m.

The Czech Republic has reported 29,877 cases since the pandemic began, with 441 deaths.

NEW DELHI — India has added another 89,706 coronavirus cases to the second-highest reported tally in the world, and the government is saying schools will reopen later this month for senior students after more than five months closed.

According to the Health Ministry, India’s total caseload on Wednesday reached 4.37 million. The ministry also reported 1,115 deaths in the past 24 hours, taking total fatalities up to 73,890. India has the second-most reported cases in the world and the third-most reported deaths behind the United States and Brazil.

The Health Ministry on Tuesday announced partial reopening of schools from Sept. 21 for students of 9-12th grades for taking teachers’ guidance. Online learning will still be permitted.

PEORIA, Ill. — Bradley University in central Illinois is requiring its entire student body to quarantine for two weeks because of clusters of COVID-19 on campus and is reverting to remote learning, officials announced Tuesday.

Officials of the private university said they have linked a spike of the coronavirus to off-campus gatherings. The Peoria university is requiring students to limit nonessential interactions, stay in their off-campus apartments, residence halls and take classes remotely beginning Tuesday.

The university said it has tallied about 50 COVID-19 cases so far, adding emergency measures are needed to respond to the outbreak without disrupting academic progress.

“Although it may seem extreme, this move to temporary remote learning and a two-week, all-student quarantine allows us to focus on the continuity of the educational experience for all of our students while giving us time to gather data on the full extent of the spread of the virus and assess the best way to proceed as a community,” Bradley President Stephen Standifird said in a message to students.

While about 4,600 undergraduates were enrolled at Bradley last year, it wasn’t immediately known how many are enrolled this fall.

SEOUL, South Korea — The number of new coronavirus infections in South Korea has stayed below 200 for the 7th straight day, amid elevated social distancing rules.

The Korea Centers for Disease Control and Prevention said Wednesday the 156 cases added in the past 24 hours took the country’s tally to 21,588 with 344 deaths.

The agency says 100 of the new cases were locally transmitted patients in the densely populated Seoul metropolitan area, which has been at the center of a viral resurgence since early August. Authorities in the Seoul area have recently ordered the shutdown of churches, night establishments and after-school academics while allowing restaurants to provide only takeouts and deliveries after 9 p.m.

South Korea on Monday reported 119 new cases in its lowest daily jump in more than three weeks. Its daily jump once surpassed 400 in late August.

HONOLULU — Honolulu Mayor Kirk Caldwell says he will extend the city’s stay-at-home order for two weeks to control the coronavirus.

The stay-at-home order will be kept in place through Sept. 24. But the mayor says he will modify the rules to allow solo activity at beaches, parks and trails. Individuals will be able to run, sit or eat by themselves in these public places beginning Thursday.

Caldwell says he extended the order because the number of new COVID-19 cases hadn’t declined as much as he wanted.

He says he wants to discuss how to cautiously reopen more activities.