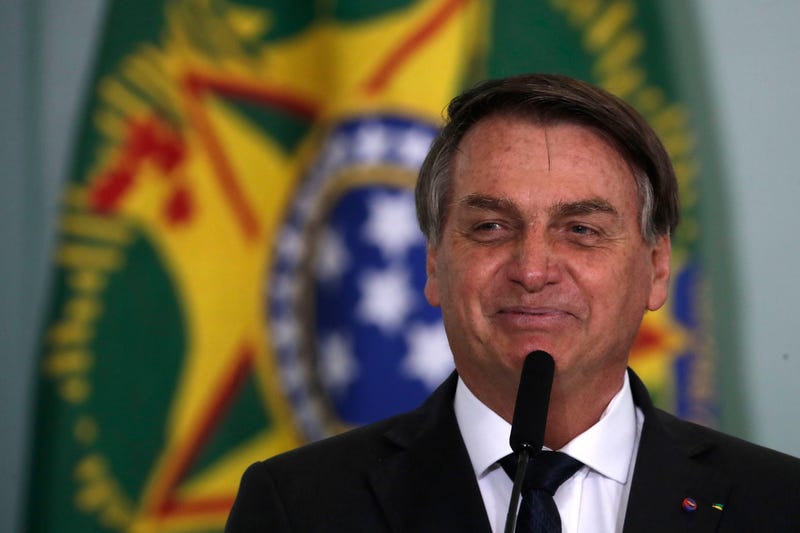 BRASILIA, Brazil -- The eldest son of Brazilian President Jair Bolsonaro says he’s tested positive for coronavirus and is in isolation with no symptoms.

Sen. Flávio Bolsonaro is the fourth member of President Jair Bolsonaro’s direct family infected by the coronavirus. The president, first lady Michelle Bolsonaro and Jair Renan Bolsonaro, another son, have tested positive for the coronavirus.

The Brazilian president has downplayed the severity of the virus, arguing against restrictions on economic activity he claims will prove far more damaging than the disease. His approach to the pandemic runs counter to most recommendations by health experts.

Flávio Bolsonaro says he’s being treated with azithromycin and chloroquine, an anti-malarial drug touted both by Brazil’s president and by U.S. President Donald Trump, despite clinical trials that found it ineffective or even dangerous.

Several members of Bolsonaro’s staff have tested positive, among them eight Cabinet members.

Brazil has 3.6 million confirmed cases and more than 115,000 deaths, second in the world only to the United States.

— University of Alabama closing bars for 2 weeks after virus spike

— A new poll from The Associated Press-NORC Center for Public Affairs Research finds 45% of Americans say they are setting aside more money than usual during the coronavirus pandemic.

— The World Health Organization is cautioning that using blood plasma from COVID-19 survivors to treat other patients is still considered an experimental therapy.

— Some Venezuelans have turned their homes and other spaces into makeshift take-out restaurant s or shops as they struggle to get by during the coronavirus lockdown.

It’s the first legal challenge to the mask order Evers issued to help slow the spread of the coronavirus after cases began to spike again in mid-June. Evers issued the order on July 30, it took effect Aug. 1, and is set to run until Sept. 28. The order requires everyone age 5 and older to wear a mask while indoors, except at home. Violators could be fined $200.

Evers’ spokeswoman Britt Cudaback accused Republicans and their allies of trying to prevent the governor from keeping people healthy and safe.

The state reported 168 new cases per 100,000 people during the past two weeks, ranking 26th in the country. Wisconsin has nearly 71,000 confirmed cases of coronavirus and 1,081 deaths.

FAIRFIELD, Conn. — Fairfield University is retesting students and staff for the coronavirus after school officials discovered some previous test results might have been erroneous or sent to the wrong patients.

Fairfield officials say they’ll stop using that lab and are advising anyone who has already taken a saliva test for the school to disregard their results.

The school says its brought in 35 rapid testing machines from Abbot Laboratory and will be retesting school community members on site with swab tests results in 15 minutes. The school says the machines can process up to 800 tests a day.

Students and staff are given the option of getting their own tests from another provider.

Classes are set to start on Sept. 1. The school says anyone who receives a positive test result will be asked to return home if possible. Anyone who lives further than 300 miles from the school or can’t go home will be quarantined on campus.

MILAN — The number of confirmed positives for coronavirus remained below 1,000 for the second straight day, even as the number of swab tests increased significantly.

Italy registered 878 new infections on Tuesday, according to health ministry data, down from 953 on Monday. The number of tests performed in the last 24 hours hit 72,341, up from around 46,000 a day earlier.

Officials recently closed down discos, which have been a large source of contagion, including 60 cases linked to a disco in Porto Cervo, Sardinia, owned by former Formula One manager Flavio Briatore. Britatore was hospitalized in Milan for the virus on Tuesday.

The death toll in Italy rose by four, bringing the confirmed toll to 35,445.

TUSCALOOSA, Ala. — Tuscaloosa is closing bars for the next two weeks after what University of Alabama officials call an unacceptable rise in coronavirus cases on campus.

Tuscaloosa Mayor Walt Maddox announced the closures along with the end of bar service at restaurants during a news conference with campus officials.

School officials didn’t offer numbers, but say there’s been a rapid rise in cases, particularly among fraternities and sororities. The university on Friday announced a moratorium on student gatherings both on and off campus.

Maddox says an unchecked spread of the virus threatens to overwhelm the health care system and sink the local economy if students are sent home for the semester for remote learning.

NASHVILLE, Tenn, — Tennessee is facing a lawsuit over Republican Gov. Bill Lee’s decision to let counties issue certain orders to curb the COVID-19 pandemic, with a focus on their authority to require people to wear masks.

The group Citizens for Limited Government and Constitutional Integrity, also known as Tennessee Stands, and two individuals filed the lawsuit Monday in Davidson County Chancery Court. Lee is the defendant in his role as governor.

The lawsuit claims a state law dealing with the governor’s powers during an emergency violates sections of the Tennessee Constitution, including provisions about the separation of powers.

A recent opinion by the state attorney general cites the law in describing the governor’s ability to delegate duties during an emergency.

Meanwhile, four University of Tennessee at Knoxville students are facing disciplinary proceedings for not abiding by safety restrictions.

BOGOTA, Colombia — The machine called the Heron looks like many other ventilators used to treat COVID-19 patients. There’s a screen atop a metallic box that displays the amount of oxygen being pumped into a person’s lungs and a plastic tube that delivers it to the patient.

But this device costs about $4,000 — a fifth of the price of ventilators imported from China — and it’s made in Colombia, where some hospitals have been overwhelmed by coronavirus patients.

Engineers hope the recently begun emergency deployment of the ventilators could save hundreds of lives and make Colombia a pioneer in low-cost equipment for COVID-19 patients.

Scientists and medical experts have been pushing back against the claims about the treatment since President Donald Trump’s announcement on Sunday that the FDA had decided to issue emergency authorization for convalescent plasma, taken from patients who have recovered from the coronavirus and rich in antibodies.

Trump hailed the decision as a historic breakthrough even though the value of the treatment has not been established. Hahn had echoed Trump in saying that 35 more people out of 100 would survive the coronavirus if they were treated with the plasma. That claim vastly overstated preliminary findings of Mayo Clinic observation.

Convalescent plasma is a century-old approach to treating the flu, measles and other viruses. But the evidence so far has not been conclusive about whether the plasma works for coronavirus, when to administer it and what dose is needed. It also would require a randomized study of some people given the plasma and some not.

Minister Christopher Tufton says Bolt was aware of the results and his recent contacts were being traced.

“It is now public knowledge that Mr. Bolt has tested positive. He has been formally notified, I’m told by the authorities,″ Tufton said.

Bolt said on social media Monday that he was awaiting the result of a coronavirus test and was quarantining himself as a precaution.

The 34-year-old retired sprinter, who won Olympic gold in the 100 and 200 meters at the last three games, posted a video on social media. He says there was a surprise birthday party for him and he’s showing no symptoms.

COLUMBIA, Mo. — An associate professor at the University of Missouri has been fired after an online class exchange in which he responded to a student who said he was from Wuhan, China, “Let me get my mask on.”

The Columbia Missourian reported that Joel Poor was relieved of his teaching duties on Monday after the comment was posted on Twitter. Poor was leading an online marketing class. In the video, he asks if any students are from outside the U.S. A student says he is from China.

Poor apologized in an email and said the reference was meant as a joke. But many students replied to the tweet that they found the comment racist and xenophobic.

A university spokesman said the comment was reported to the Office of Civil Rights and Title IX.

LONDON — British Prime Minister Boris Johnson says his government is ready to advise high school students in England to wear face masks “in some contexts” if the medical evidence deems it necessary in containing the spread of the coronavirus.

His government, which oversees schools in England, has come under increasing pressure to change its advice on masks in certain school settings following the decision by the Scottish government to require students over 12 to wear masks.

Johnson says, “if we need to change the advice, then of course we will.”

Schools in England are due to reopen in the upcoming weeks.

STOCKHOLM — The Swedish health agency says at least 3,700 people have mistakenly been given a positive coronavirus result after using a deficient self-administered test kit.

Tegmark Wisell says the flaw “sends a signal that one must constantly work with quality.”

She says those who self-administered the tests had “mild symptoms” or were “asymptomatic” people who haven’t developed symptoms, and those given the wrong answer would be contacted.

The PCR test, one of the two tests used to diagnose coronavirus, swabs the throat and nose to detect the strain of coronavirus.

THE HAGUE, Netherlands —The Dutch public health institute says coronavirus infections in the Netherlands declined by 425 to 3,588 in the past week.

The declines in the institute’s weekly report Tuesday came after stern warnings from Prime Minister Mark Rutte that the country faced a possible second lockdown if people didn’t stick to social distancing, hygiene and other measures aimed at reining in the spread of the virus.

While infections trended downward, the number of hospital admissions and deaths in the past week rose compared to a week earlier.

He has pledged to declare regional emergency orders if the expansion of the pandemic continues, facilitating regional officials’ ability to issue lockdowns and restrict mobility.

Sánchez says the infection rate is “preoccupying” but called it “far from the situation in mid-March,” when the government imposed a state of emergency.

Spain is grappling to control transmission of the virus, with a new wave hitting the country only days before the opening of the school year. Sánchez encouraged Spaniards to download a contact-tracing mobile app that the government is rolling out.

More than 400,000 people have been infected since the onset of the epidemic and at least 28,872 have died from the coronavirus. However, the figure doesn’t capture many who died without being tested.