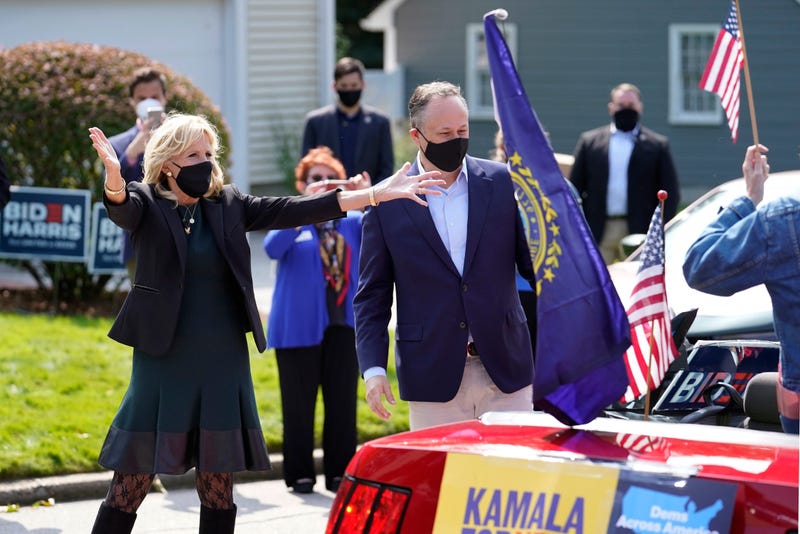 WASHINGTON (AP) — The Latest on the 2020 presidential election (all times local):

The spouses of Joe Biden and Kamala Harris are in New Hampshire speaking about the importance of the Affordable Care Act.

Jill Biden and Doug Emhoff arrived at the Bedford home of a supporter on Wednesday afternoon, speaking outside a gray barn. The audience consisted only of the homeowners, other speakers, a few reporters and campaign staff.

They were introduced by Dr. Susan Lynch, a retired physician and former first lady of New Hampshire. Her husband, former Gov. John Lynch, was governor when the Affordable Care Act was enacted under President Barack Obama.

Emhoff, referring to President Donald Trump’s town hall Tuesday night, said the president had no explanation for how he’d protect coverage for people with preexisting conditions.

He says: “The truth is he has no plan and he never will."

HERE’S WHAT YOU NEED TO KNOW ABOUT WHAT’S HAPPENING IN THE PRESIDENTIAL RACE:

President Donald Trump was set to give a news conference Wednesday evening before attending a dinner for the National Republican Congressional Committee. His Democratic challenger, Joe Biden, received a briefing from public health experts on Wednesday and planned to make remarks on the pandemic and possible vaccine.

— In ‘law and order’ debate, data can be molded to suit moment

— Vision 2020: What happens if the US election is contested?

A prominent Republican donor who supports President Donald Trump says some in Trump’s orbit are worried he’s “overconfident” on the upcoming debates against Democrat Joe Biden.

Dan Eberhart says Trump came off as a “little coarse” when confronted by undecided voters at Tuesday’s town hall in Philadelphia.

Face-to-face with everyday voters for the first time in months, Trump was defensive but resisted agitation as he was pressed on his administration’s response to the COVID-19 pandemic and why he doesn’t more aggressively promote the use of masks to reduce the spread of the disease.

Eberhart says, “Frankly, I expected President Trump to be better prepared to cajole undecided voters over to his side of the fence at the town hall.” He adds: “President Trump seemed unaware that he needed to downshift his rhetoric to something more moderate being as how his audience was undecided voters and not attendees of one of his rallies.”

Biden said Tuesday that he’s begun preparing for presidential debates that begin later this month by studying Trump’s past comments.

On a call for reporters Wednesday hosted by the campaign, Trump surrogate and Ohio Rep. Brad Wenstrup said that when it comes to the economy and the coronavirus, Biden has “proven he wants to root against American prosperity for his own political gain.” Wenstrup says the Democratic presidential ticket is “playing politics with people’s lives.”

Biden has said he would take a vaccine “tomorrow” if it were available, but he would want to “see what the scientists said” first. Harris says she wouldn’t trust Trump on the safety of any potential vaccine and worried that health experts and scientists would be “muzzled” by the president because of his urgency to get a vaccine approved by his stated goal of Election Day.

Trump said Tuesday night that a vaccine could be ready within four weeks, a more optimistic timeline than that laid out by other public health experts and government officials. He also suggested, without proof, that the coronavirus pandemic “would go away without the vaccine.”

Joe Biden is receiving a virtual briefing from a former U.S. surgeon general and a collection of health experts on how best to slow the spread of the coronavirus.

Biden’s campaign created a virtual studio that connected the former vice president via video with former Surgeon General Vivek Murthy and six other experts at a theater in downtown Wilmington, Delaware, on Wednesday. Biden will give a speech on the topic later in the day.

David Kessler, board chairman and director for the Center for Science in the Public Interest, stressed for Biden the important of requirements increasing “universal masking” but also increased testing and contact tracing. He suggested doing so could save thousands of lives and ultimately be more effective between now and early next year as vaccines are being developed.

Others on the briefing endorsed a national requirement to wear masks, given the country’s “porous borders” and rules that vary from state to state. They also said that when some areas have moved to reopen shuttered bars and restaurants, virus outbreaks have often followed — suggesting that officials should encourage people to remain outside during relatively mid-fall weather and allow for returns to such establishments later.