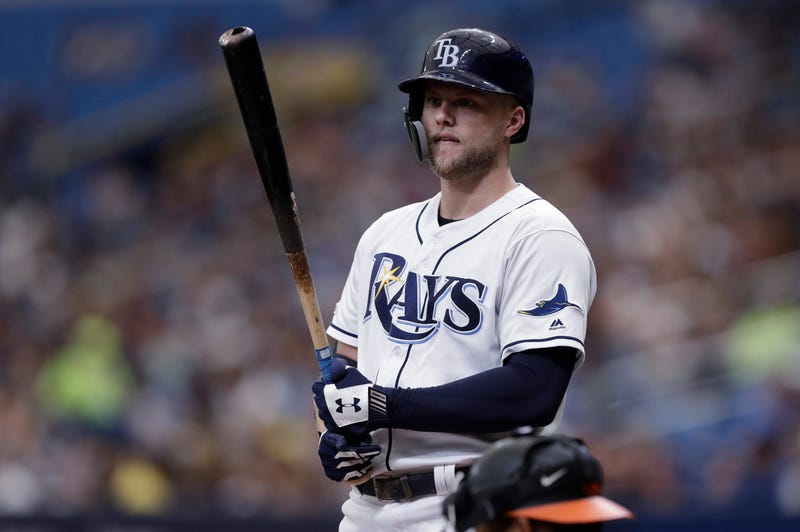 Photo credit FILE - In this Sept. 2, 2019, file photo, Tampa Bay Rays' Austin Meadows bats against the Baltimore Orioles during the first inning of a baseball game in St. Petersburg, Fla. Meadows has been placed on the injured list after testing positive for the coronavirus. The Rays announced the move Thursday night, July 16. (AP Photo/Chris O'Meara, File)
By The Associated Press

Tampa Bay Rays outfielder Austin Meadows was placed on the injured list after testing positive for the coronavirus.

Left-handed reliever Aaron Loup was added to the roster in place of Meadows, who was a first-time All-Star and batted .291 with 33 homers and 89 RBIs last season.

Meadows had not been seen at Tropicana Field since working out with the Rays on July 3, the first day of summer camp.

The 25-year-old is the second Tampa Bay player known to have tested positive for the coronavirus. Right-handed pitcher Tyler Glasnow joined the team Tuesday after missing 11 days of summer camp.

Star third baseman Yoán Moncada rejoined the Chicago White Sox after missing the start of their summer camp because he contracted the coronavirus.

Moncada revealed that he tested positive for COVID-19 on a video conference call with reporters. He said he didn’t experience any major symptoms but it was a difficult time for him and a little scary.

He hopes to be ready for opening day July 24.

The University of Northern Colorado has suspended athletic workout activities after a spate of positive cases of COVID-19, including among football players who have been advised to quarantine.

There is no timeline for when the student athletes will be allowed to return to voluntary workouts at the campus about an hour north of Denver.

The university on Thursday declined to identify those who tested positive for the virus, citing patient privacy and Weld County Department of Public Health and Environment regulations.

The school is working with local health officials on contract tracing to notify anyone who came in close contact with the student athletes who were infected.

The West Coast Conference will delay the start of fall competition in all sports until Sept. 24 because of the coronavirus pandemic.

The league said Thursday that the affected sports are cross country, soccer and volleyball. The decision doesn’t apply to sports which aren’t sponsored by the league, including BYU and University of San Diego football.

Training and practices can be conducted at the discretion of each school.

Sports that are played in the spring won’t participate in any fall competition before Sept. 24, which includes baseball, beach volleyball, golf, rowing, softball and tennis.

Men’s and women’s basketball, which are scheduled to start Nov. 10, aren’t affected.

Indiana Pacers guard Malcolm Brogdon, one of the NBA players who tested positive for COVID-19, says he has been wearing a mask at practice for two reasons: To help get in shape and to make his teammates comfortable he won’t spread the disease.

Brogdon was a late arrival in Orlando, Florida, after announcing June 24 that he had a positive test. He returned to practice for the first time Wednesday and intends to wear the mask until games start.

“I feel really good,” Brogdon said. “My conditioning is not where I want it to be, of course. It’s not NBA shape. But I’ve heard people say I look more in shape than they thought I would. I will definitely be in shape by the time games start.”

Coach Nate McMillan said the decision is entirely up to Brogdon.

“He doesn’t have to do that,” McMillan said. “But we haven’t really thought about it (spreading) because of all the testing we have go through.”

Brogdon also is coming back from a torn quad muscle in his thigh he suffered March 4. The Pacers had listed Brogdon as week to week when the season was suspended in mid-March.

He also says he intends to carry a message on the back of his jersey though he declined to say what it will say.

In statement issued by Executive Director Chrissie Juliano, the Big Cities Health Coalition made some recommendations about procedures to follow when the baseball season resumes July 23. They range from proper handwashing stations to only traveling on charter flights.

“It is critical that the local public health status of COVID-19 be considered when determining if professional sporting events should take place in the jurisdiction, with or without spectators,” Juliano wrote. “We all want to see our teams back on their respective fields, but, frankly, this should not come at the expense of the health and safety of the people in their organizations and our community.”

The coalition includes the top health officials from 30 of the country’s largest metropolitan areas, including virtually every major league city. It noted that testing should not replace the quarantine of those diagnosed with COVID-19, and recommended that players and staff cooperate with contact tracing. Teams should report clusters of three or more positive cases that occur within a two-week period.

UConn, which is scheduled to play its first season as an independent after leaving the American Athletic Conference has road games scheduled at Virginia, Mississippi, North Carolina and San Jose State. Lamont said should the team travel to a state where infection rates remain high, Husky players would be subject to Connecticut’s 14-day quarantine rule upon their return to Storrs.

“Gov. Lamont has done a tremendous job leading our state through this difficult time,” UConn athletic director David Benedict said in a statement. “We will continue to consult with his team and follow the guidance of state and public health officials to find the best path forward.”

Michigan State University is temporarily reducing salaries for athletic department employees under contract who make at least $100,000 to cope with the loss of revenue related to the COVID-19 pandemic.

The move announced Thursday will cost Hall of Fame basketball coach Tom Izzo just under $250,000 and football coach Mel Tucker a little more than a quarter million dollars based on a 7% cut in pay for employees making at least $500,000.

The Mid-American Conference will delay the start of its fall Olympic sports, including men’s and women’s soccer and women’s volleyball, to Sept. 3. The conference football season is also scheduled to begin that day. The conference said the decision will provide more time to provide for a safe return to competition.

The Cancun Challenge basketball tournament for men and women has been moved from Mexico to Melbourne, Florida, because of the coronavirus.

The games will be played at Eastern Florida State College. Details on the fields and schedule will be released later. Last year’s event was held in late November.

The San Francisco 49ers and Giants are teaming with a health care company to distribute hundreds of thousands of cloth masks throughout the Bay Area to help stop the spread of the coronavirus.

The two teams announced the plan Thursday to work with Dignity Health and their flagship radio station KNBR on the initiative to support Governor Gavin Newsom’s campaign advocating wearing masks in public.

The teams will each produce masks co-branded with Dignity Health’s logo that will be distributed at no charge to fans, workers on the front lines of the pandemic and community organizations. The Giants masks are currently being distributed with the baseball season scheduled to start next week. The 49ers masks are set to be distributed starting next month.

“If we want to get back to the ballpark and get life back to life as normal this is a simple step,” 49ers CEO Jed York said about wearing masks.

Organizers of the Cancun Challenge are moving this fall’s Thanksgiving week college basketball tournament to the campus of Eastern Florida State College in Melbourne, Florida.

Final details about hotels, travel packages, teams and schedules have not been finalized, organizers say, and fans are being asked to wait to book trips until more details are available.

The Mid-Eastern Athletic Conference has suspended fall sports, becoming the third Division I league to postpone its football season.

Following fellow FCS conferences the Ivy League and Patriot League, the MEAC announced it would not have competition in the fall and consider trying to make up the schedule for those sports in the 2021 spring semester.

The MEAC is comprised of 11 historically black colleges, though its membership is in flux. Earlier this year, Florida A&M and Bethune-Cookman announced they would be leaving the MEAC and joining the Southwestern Athletic Conference next year. MEAC-power North Carolina A&T has announced it will be moving to the Big South in 2021.

The Miami Dolphins say they’re prepared to play with or without spectators this season, but they will not allow fans to attend their home preseason game or training camp, and there will be no tailgating during the regular season.

The changes were made because of the coronavirus and announced Thursday.

“Things are changing week to week, and we are still more than two months away from our first scheduled regular-season home game,” Dolphins CEO Tom Garfinkel said in a statement. “So we’ll wait and work with local authorities, and make the determination about fans or no fans based on the data as we get closer. ... We’re ready for any scenario.”

Wisconsin is delaying its renovation of the south end-zone seating area inside Camp Randall Stadium due to uncertainty caused by the pandemic.

The project was scheduled to begin after the 2020 football season and completed by the start of the 2021 schedule.

“We are obviously operating in a time of great uncertainty,” athletic director Barry Alvarez said in a statement. “Given our construction timeline and the timing around when decisions had to be made, we felt it was best to be prudent and delay the project for a bit.’’

The renovation includes enhanced seating options such as loge boxes and club seats as well as access to indoor and outdoor hospitality clubs and climate-controlled amenities and premium food offerings.

Wisconsin’s renovation of the Kohl Center is on a different timeline and hasn’t been delayed at this point.

The Big East Conference has joined several other leagues in deciding to play only conference opponents during the fall sports season, if it's able to play at all.

The basketball-focused conference announced the decision Thursday. The Big East still hasn't decided whether it will conduct a fall season and championships.

The league said in the coming weeks, it will continue to monitor COVID-19 conditions across the country and in Big East communities and will provide further updates on dates and formats “as appropriate.” All decisions regarding fall conference competition will be guided by health and safety concerns and will be made in accordance with NCAA actions and policies.

The American Athletic Conference will require all its schools to test football players for COVID-19 at least 72 hours before competition.

The announcement Thursday by the American comes ahead of the expected release of recommendations from the NCAA.

The Power Five conferences — ACC, Big Ten, Big 12, Pac-12 and SEC — have been working toward a minimum standard for testing throughout major college football. Though the Big Ten and Pac-12 announced last week that they would play only conference games this football season to help minimize potential disruptions caused by COVID-19, other FBS conferences have not yet decided on scheduling formats for the coming season, which appears to be in peril because of the surging pandemic.

A top-division Russian soccer game has been called off after nine people at FC Sochi tested positive for the virus.

The Russian Premier League says Sochi’s game against Tambov will not take place as scheduled on Thursday. The league hasn’t said how many of the nine are players.

There was no mention of whether the game could be rescheduled. The league is scheduled to finish its season next Wednesday.

Sochi last month won a game 10-1 against FC Rostov after a virus outbreak forced Rostov to send a team of youth and academy players.

Another club, FC Orenburg, forfeited two games following an outbreak at the club and has since been relegated.