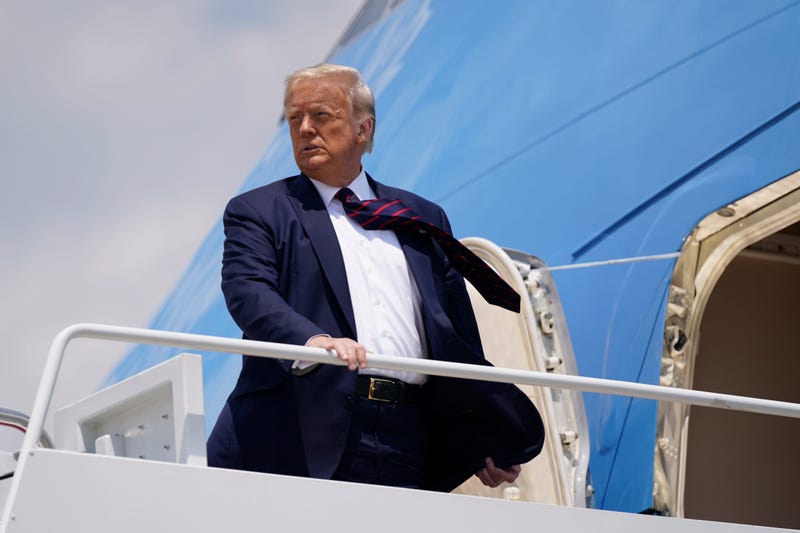 Photo credit President Donald Trump boards Air Force One for a trip to visit Bioprocess Innovation Center at Fujifilm Diosynth Biotechnologies in Morrisville, N.C., Monday, July 27, 2020, in Washington. President Trump’s lawyers filed fresh arguments Monday to try to block or severely limit a criminal subpoena for his tax records, calling it harassment of the president. Lawyers filed a rewritten lawsuit in Manhattan federal court to challenge the subpoena by Manhattan's state prosecutor on grounds they believe conform with how the U.S. Supreme Court said the subpoena can be contested. (AP Photo/Evan Vucci)

NEW YORK (AP) — President Donald Trump’s lawyers filed fresh arguments Monday to try to block a criminal subpoena for his tax records, calling it a harassment of the president.

Lawyers filed a rewritten lawsuit in Manhattan federal court to challenge the subpoena by Manhattan's state prosecutor on grounds they believe conform with how the U.S. Supreme Court said the subpoena can be contested.

They asked a judge to declare it “invalid and unenforceable."

The high court ruled earlier this month that a Manhattan prosecutor could subpoena tax records from Trump’s accountant over his objections.

But the court said he could challenge the subpoena as improper just as anyone else can.

Trump’s lawyers had argued that the president could not be criminally investigated while he was in office.

In their new court papers, Trump’s lawyers said the subpoena of his tax records was “wildly overbroad” and “amounts to harassment of the President.”

They said the subpoena seeks detailed information about all of Trump's assets in the U.S. and abroad for a 10-year period.

“Simply put, it asks for everything," the lawyers wrote.

Vance, a Democrat, has requested eight years of the Republican president’s personal and corporate tax records.

The Supreme Court returned the case to a federal judge in Manhattan who has arranged for both sides to finish filing their legal arguments over challenges to the subpoena by mid-August.

Last year, the same judge ruled against Trump in a written opinion that was upheld by the 2nd U.S. Circuit Court of Appeals and the Supreme Court.

In their new court filing, Trump's lawyers said the tax subpoena “demands voluminous documents related to every facet of the business and financial affairs of the President and numerous associated entities — from the banal to the complex, from drafts and memoranda to formal records, from source documents to summaries."

They said it was wrong for Vance to seek records dating to 2011 when he was primarily investigating events that took place in 2016.

The lawsuit said the subpoena concerns entities in California, Florida, Hawaii, Illinois, New Jersey, North Carolina, Pennsylvania, Virginia, and the District of Columbia. It said other affected entities are located outside the U.S., including in Canada, the Dominican Republic, Dubai, India, Indonesia, Ireland, the Philippines, Scotland, and Turkey.

“Taken together, the subpoena demands an accounting and analysis of every single asset and liability of the President, including each one of the listed entities," the lawyers wrote, calling the request “an overreaching demand designed to pick apart the President.”

A message seeking comment from Vance was left with his press office.