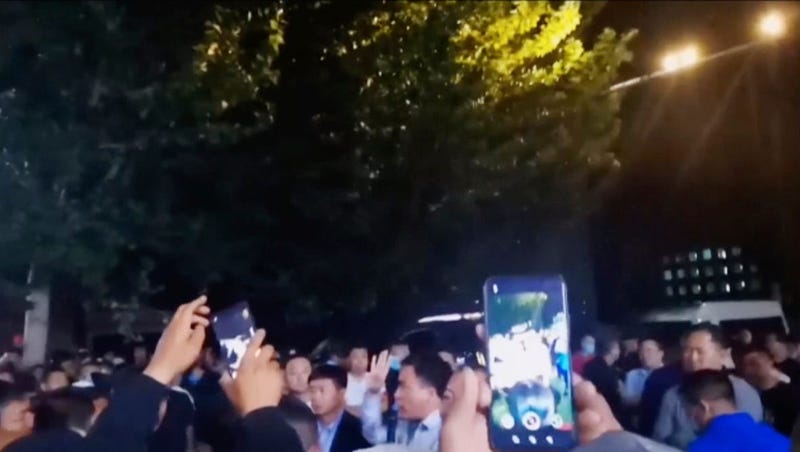 Photo credit In this image made from video taken in August 2020, parents confront authorities outside a school in Tongliao in Northwestern China's Inner Mongolia region. Ethnic Mongolians, including students and parents, in China’s Inner Mongolia region are demonstrating their anger in rare public protests against a new bilingual education policy that they say is endangering the Mongolian language. (AP Photo)
By The Associated Press

BEIJING (AP) — An American newspaper says one of its journalists was detained and then expelled from China’s Inner Mongolia region while covering tensions over a new policy that reduces the use of the Mongolian language in education.

The Los Angeles Times said in a story published online Thursday that the reporter was interrogated at a police station, grabbed by the throat and pushed into a cell and held for more than four hours before being forced to leave the northern Chinese region.

The incident comes amid broader tensions between the U.S. and China over journalists stationed in each other's country.

The reporter was surrounded by plainclothes men at a school in Hohhot, the region's capital, and put into a police car to be taken to a police station, according to the account. It says she was not allowed to call the U.S. Embassy.

“One officer grabbed her throat with both hands and pushed her into a cell,” the story says.

Three government officials and a police officer went with her to a train station and stood at the window until the train left for Beijing, the Los Angeles Times said.

The story did not identify the journalist, but the paper's Beijing bureau chief, Alice Su, confirmed that it was her. She declined further comment.

The Hohhot city propaganda department did not immediately respond to a request for comment.

The account came near the end of a story Su wrote on protests and class boycotts that have broken out in Inner Mongolia this week over a move to increase the use of Chinese at schools where Mongolian has been the main language of instruction.

Inner Mongolia is a region of 25 million people that borders the country of Mongolia to the north. About 17% of the population is ethnic Mongolian while the Han make up 79%.

Just before the new school year started this week, authorities announced changes for Mongolian-medium schools. Literature classes for elementary and middle school students will switch to a national textbook and instruction in Mandarin Chinese, and some other courses would follow in the coming two years.

Opponents see the move as an attempt to force them to assimilate into China's majority Han culture. They fear their mother tongue could be wiped out over time.

Separately, the U.S. has designated the American operations of several Chinese state media as foreign missions this year and put a cap on the number of visas for some, forcing them to reduce the size of their Chinese staff.

China has retaliated by expelling American journalists working for three U.S. newspapers, and requiring several U.S. news bureaus including The Associated Press to file paperwork similar to what's required of foreign mission in the United States.

Earlier this week, the Australian government said that Cheng Lei, an Australian journalist working for Chinese state television, is being held by authorities in China. It is unclear why she has been detained.

Cheng is an anchor for the BizAsia program on CGTN, the English-language channel of China Central Television. She was born in China and worked in finance in Australia before starting a career in journalism with CCTV in Beijing in 2003.