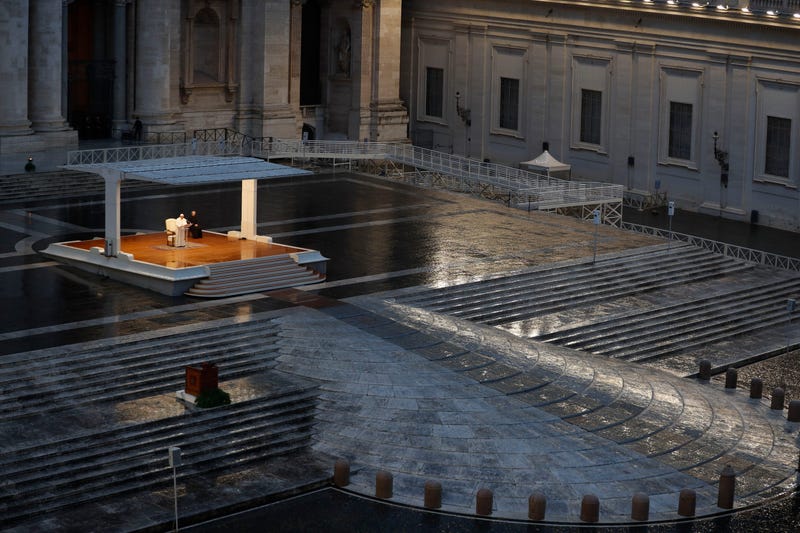 Photo credit FILE - In this photo taken on March 27, 2020, Pope Francis, white figure standing alone at center, delivers an Urbi et orbi prayer from the empty St. Peter's Square, at the Vatican. If ever there was a defining moment of Pope Francis during the coronavirus pandemic, it came on March 27, the day Italy recorded its single biggest daily jump in fatalities. From the rain-slicked promenade of St. Peter’s Basilica, Francis said the virus had shown that we’re all in this together, that we need each other and need to reassess our priorities. (Yara Nardi/Pool Photo via AP )
By The Associated Press

ROME (AP) — On the March day that Italy recorded its single biggest jump in coronavirus fatalities, Pope Francis emerged from lockdown to offer an extraordinary prayer and plea to his flock to reassess their priorities, arguing the virus had proved they needed one another.

Francis’ words from the rain-slicked promenade of St. Peter’s Basilica encapsulated the core messages he has emphasized during his seven-year pontificate: solidarity, social justice and care for the most vulnerable.

But the dramatic moment also underscored how isolated the pope had become during the COVID-19 emergency and a sustained season of opposition from his conservative critics: He was utterly alone before an invisible enemy, preaching to a hauntingly empty piazza.

During the virus crisis, Francis has become a 21st century “prisoner of the Vatican," as one of his predecessors was once known, robbed of the crowds, foreign travel and visits to the peripheries that so defined and popularized his papacy. He will resume physical contact with his flock this week with revived Wednesday general audiences, but the meetings will be held in an internal Vatican courtyard before a limited crowd rather than the vast St. Peter's Square.

After weeks during which Italy brought the virus under control, the country's caseload is rebounding — now adding more than 1,000 new infections a day — so there’s no telling when or how more ambitious public gatherings and travel might return.

What does all this mean for a 83-year-old globe-trotting pope and his ministry to the 1.2-billion-member Catholic Church?

Alberto Melloni, a church historian usually sympathetic to Francis, declared that the pandemic marked the beginning of the end of Francis’ pontificate. In a recent essay, he asserted that tensions that had percolated throughout the papacy came to the surface during the lockdown, and won’t fade even after COVID-19 is tamed.

“In every papacy there’s a historic point after which the final phase begins, which can last years,” Melloni wrote. For Francis, “this point was the pandemic and his solitude before the virus.”

Papal biographer Austen Ivereigh concurred that the pandemic was indeed “a before and after moment” for the papacy and humanity itself. But he disputed that Francis was isolated and said the crisis had offered him an unexpected opportunity to provide spiritual guidance to a world in need.

The pandemic, he said in an interview, had given “a whole new impetus to the papacy” to double down on its core message, articulated most comprehensively in Francis’ 2015 encyclical “Praised Be.” In the document, Francis demanded political leaders correct the “perverse” structural inequalities of the global economy that had turned Earth into an “immense pile of filth.”

“It is his conviction that this is a turning point, and that what the church can offer humanity could be very helpful,” Ivereigh said. “He is convinced that ... in a crisis, and a major crisis like a war or a pandemic, you either come out better or you come out worse."

There are rumors Francis is writing a new encyclical for the post-COVID-19 world, but for now a key part of his message is embodied by a Vatican commission helping local church leaders ensure that the needs of the poorest are met now and after the emergency fades.

The commission is providing concrete assistance — every month or so the Vatican announces a new delivery of ventilators to a developing country — as well as policy recommendations for how governments and institutions can re-think global economic, social, health care and other structures to be more equitable and sustainable.

“The pope isn’t just looking at the emergency,” said Sister Alessandra Smerilli, an economist who is a key member of the commission. "He is perhaps one of the few world leaders who is pushing to ensure that we don’t waste this crisis, that all the pain that this crisis has caused isn’t in vain.”

In recent weeks, Francis has also launched a series of new catechism lessons applying Catholic social teaching to the pandemic, reasserting the church's “preferential option for the poor” by demanding that the rich don’t get priority in getting a vaccine and that political leaders address social injustices exacerbated by the crisis.

“Some people can work from home, while this is impossible for many others,” Francis pointed out last week. “Certain children ... can continue to receive an academic education, while this has been abruptly interrupted for many, many others. Some powerful nations can issue money to deal with the crisis, while this would mean mortgaging the future for others.

“These symptoms of inequality reveal a social illness; it is a virus that comes from a sick economy,“ he said.

Those words were delivered to a television camera from Francis' library — hardly a headline-grabbing moment. It's the setup the Vatican has used since March, when it suspended all nonessential activity and gatherings.

More significantly, the pandemic has deprived Francis of one of his most potent tools: foreign travel. Ever since the celebrity-style, globe-trotting days of St. John Paul II, the Holy See has counted on foreign trips and the accompanying 24-hour media coverage to get the pope's message out to a wide, international audience that might otherwise never pay him much heed.

Francis used those trips to touch base with his far-flung priests and nuns, deliver tough-love messages to world leaders and provide pastoral care, often in forgotten corners of the planet. They also allowed him to push the envelope on issues close to his heart during free-wheeling news conferences upon returning home.

What an extended absence of such travel will mean for the papacy remains to be seen. But Francis has willingly adhered to the Italian government's lockdown, and even criticized priests who complained about such measures.

Ivereigh said Francis has expressed his “spiritual closeness” in other ways, including his livestreamed morning Masses that were viewed by millions before the Vatican pulled the plug once Italian churches reopened.

All summer there have been reports of priests, nuns and ordinary folk around the world receiving one of Francis’ famous “cold calls:” a bishop in Mozambique dealing with cholera and malaria outbreaks as well as a Muslim insurgency; an Argentine nun who cares for transsexual women.

While such feel-good stories have occasionally leaked out during the Vatican's typically slow summer, they haven’t drowned out the steady drumbeat of criticism in U.S. Catholic media from Francis’ conservative opponents, a small but vocal wing of the church.

They have used his relative isolation to continue their attacks and demands for accountability in a two-decade cover-up of the actions of American ex-Cardinal Theodore McCarrick, whom Francis defrocked last year after a Vatican investigation concluded he sexually abused minors and adult seminarians.

Francis still hasn't released a report into what the Vatican knew and when about McCarrick, two years after promising to do so.

As evidence of the conservative wing's desire to look beyond the Francis papacy, two books were published this summer by prominent Catholic authors. Both were titled “The Next Pope.”

One provided character sketches of 19 papal candidates for the next conclave, the other a checklist of characteristics the next pope must have.

They each pontificated about a future pontificate — typically taboo while the current pope is very much alive. But their publication suggests that at least some are thinking about what comes next, not just after the pandemic, but the papacy.