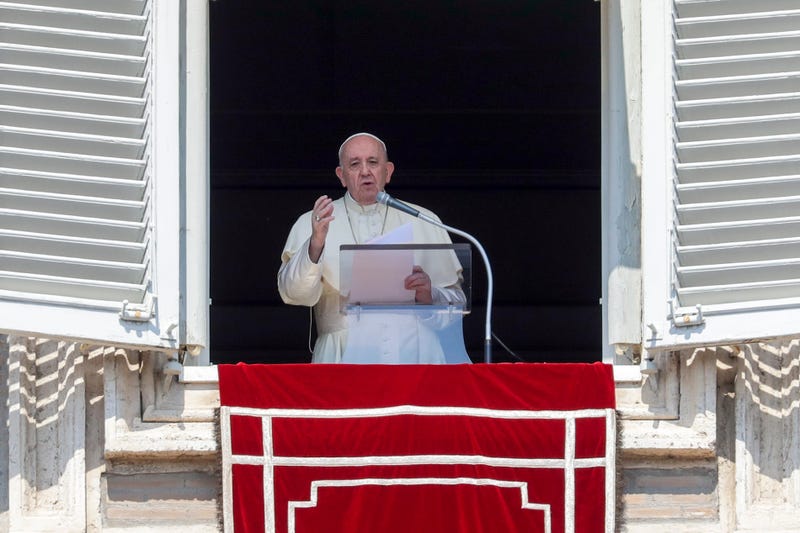 Photo credit Pope Francis delivers his blessing as he recites the Angelus noon prayer from the window of his studio overlooking St.Peter's Square, at the Vatican, Sunday, Sept. 13, 2020. (AP Photo/Andrew Medichini)
By The Associated Press

VATICAN CITY (AP) — Pope Francis urged political leaders to listen to protesters and heed their calls for political and social change, an apparent reference to protests in Belarus against the country's authoritarian president.

Francis didn’t mention Belarus or any country in his appeal Sunday during his noontime prayer but his comments came as the Vatican foreign minister, Archbishop Paul Gallagher, traveled to Belarus to meet with church and civil authorities amid weeks of anti-government protests.

“While I urge protesters to make their demands known peacefully without falling into the temptation of aggression and violence, I appeal to all those with public and governmental responsibilities to listen to the voice of their fellow citizens and to meet their just aspirations by ensuring full respect for human rights and civil liberties,” Francis said.

The pope has also spoken out previously in support of anti-racism protests in the U.S.

Protesters in Belarus have spent a month denouncing the results of the country’s Aug. 9 presidential election as rigged and demanding the resignation of President Alexander Lukashenko. Facing criticism from the West, Lukashenko has worked to cement ties with his main sponsor, Russia.

The Vatican would be loathe to criticize Russia or Belarus publicly, given its longstanding efforts to improve relations with the influential Russian Orthodox Church.

In its statement Friday announcing Gallagher’s visit, the Vatican stressed the religious nature of the visit. It said Gallagher was going to Belarus “to demonstrate the attention and proximity of the Holy Father to the Catholic Church and the entire country.”

The Vatican's media service, Vatican News, noted that Gallagher likely wouldn't be able to meet with the Catholic archbishop of Minsk, Tadeusz Kondrusiewicz. Belarus authorities have refused to let him back into the country after he left in August to visit Poland.

Read all AP stories about developments in Belarus at https://apnews.com/Belarus.