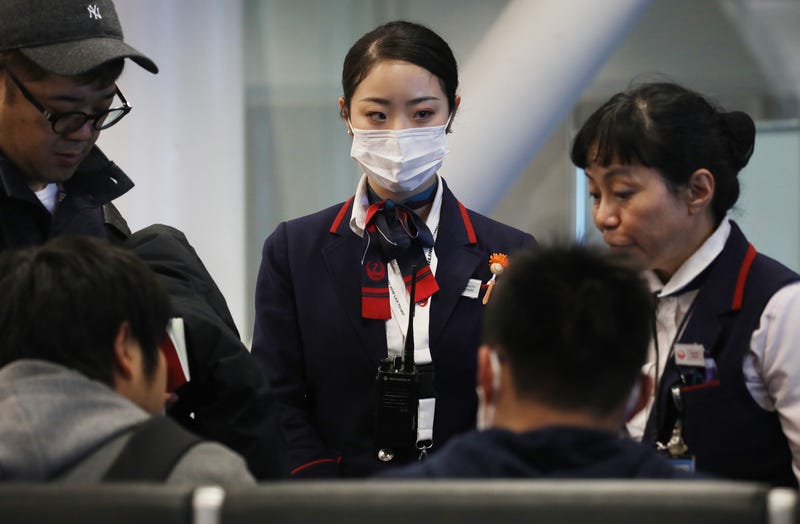 Photo credit Mario Tama/Getty Images
By All News KCBS Radio KCBS All News 106.9FM and 740AM

Though no new cases have been diagnosed, there are more signs that the global coronavirus outbreak is affecting daily life in the Bay Area.

Americans evacuated from China have been quarantined at a Fairfield military base, Oakland schools have told some students to stay home for two weeks and five healthcare workers in San Jose have also been asked to stay home.

Oakland Unified School District is following the advice of the Centers for Disease Control and Prevention, telling students and staff to temporarily stay away from school if they've traveled to China.

“[A>nybody who has traveled to mainland China, should, once they return home to Oakland, stay home for two weeks,” said John Sasaki, director of communications for the district.

School officials say there are no confirmed cases of the virus, and the Oakland Unified is implementing this policy out of an abundance of caution.

Five healthcare workers were also told to stay home from the Good Samaritan Hospital in San Jose, after coming in contact with a patient with the virus.

The patient visited the emergency room at the Good Samaritan on January 28. He was wearing a mask the entire time.

Despite sending exposed workers home, hospital officials are stating that the possibility of a worker contracting the virus is extremely low.

There are also no confirmed cases of coronavirus among the 250 Americans quarantined at the Westwind Inn on the grounds of Travis Air Force Base and no one is showing symptoms, officials said.

However, some Americans  traveling in Asia now have no way to get home.

Former KCBS employee Joe Cooper and his husband are touring Asia. They landed in Hong Kong 12 days ago, and are stranded in Vietnam because American Airlines has cancelled flights out of the area.

But, Cooper second-guesses wearing a mask for his protection.

“Sometimes you’re wearing them, and sometimes you feel like you’re just a paranoid tourist because other people really aren’t wearing them,” said Cooper. “And you have to kind of weigh the, ‘am I being ridiculously paranoid in a place where there’s not many people.’ But when I get into a crowd of people I put my face mask back on.”

Cooper said that American Airlines has suspended flights out of Hong Kong and mainland China until February 20.